The Man Of The Woods Tour, Nashville, TN, EE.UU. +21 imágenes 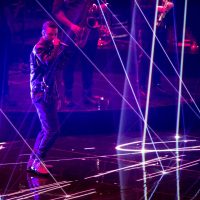 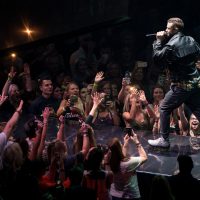 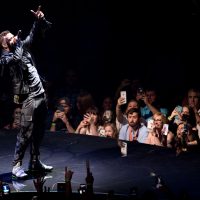 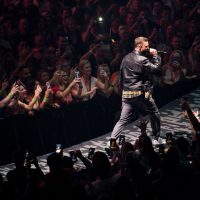 Justin Timberlake On Man Of The Woods Tour

The Chattanoogan — Singing and dance sensation Justin Timberlake brought his latest tour to the Music City Wednesday night at Bridgestone Arena. The Memphis native’s home-state show packed the arena with new and old fans alike, and even included a slew of celebrities.

The critically acclaimed Man of the Woods tour, of the same name of Timberlake’s most recent album, has been stopping all over the country and delighting fans with an extensive journey into the singer’s catalogue.

With three interconnected stage setups across the arena, Timberlake danced and sang his way around Bridgestone interacting with his screaming fans. The former N-Sync star has come a long way in his solo professional career and established himself as one of the top performers in pop music.

The popstar opened his show with «Filthy», the first single from his latest album. Timberlake’s setlist ran long with 28 songs, including five covers. As a special treat for his Nashville crowd he brought out Chris Stapleton to perform their song «Say Something», and «Tennessee Whiskey».

Tennessean — With the very first word he said on stage Wednesday night, Justin Timberlake made it clear his latest Nashville concert was not just another stop on his tour.

«Smashville!» he hollered at Bridgestone Arena as his sprawling band — The Tennessee Kids — launched into the opening number «Filthy».

«Smashville», of course, is the nickname for Nashville popularized by the city’s NHL team, the Nashville Predators, who have a series-deciding playoff game at home Thursday night.

And while Timberlake is a native of Memphis, he’s now a Nashville-area resident after purchasing a country estate in nearby Leiper’s Fork a few years back.

About an hour — and several more cries of «Smashville» — later, he was waving the team’s gold rally towel around, asking the crowd, «Can we get this win tomorrow night? Come on!»

But even if he hadn’t played up the love for his «new hometown», or once again brought out his country music pal Chris Stapleton (more on that in a minute), the 37-year-old pop star still would have had Music City in the palm of his hand.

His new neighbors in Middle Tennessee have seen a few different sides of him in the past year.

Last September, he was strumming an acoustic guitar with a bandana around his neck on a farm in Franklin (right next door to Leiper’s Fork) as he headlined the Pilgrimage Festival.

But four months later, he was on every TV screen in the U.S., shouldering the Super Bowl halftime show with a high-tech, dance-fueled, laser-lit blowout.

Wednesday night’s show split the difference between those two approaches. It was part of his «Man of the Woods» tour, supporting the daring new album of the same name. On it, Timberlake tries to fuse his status as an R&B song-and-dance man with his country roots and a love of rustic living — and listeners have disagreed over how much he succeeded.

It might be a mixed bag on record, but in concert, «Man of the Woods»-era Timberlake makes for an engaging two-hour show that continues to rejuvenate itself.

The first hour was a barrage of live Timberlake staples and near-nonstop choreography with a few new cuts sprinkled in: «Sexyback» and «Senorita» rubbing shoulders with «Higher Higher» and «Midnight Summer Jam».

That last tune includes the refrain, «Act like the south ain’t the s—«, during which Timberlake ad-libbed, «I’ve been waiting the whole tour to say that».

The tour’s nature-inspired stage may sound strange on paper, but it’s striking and effective in person: artificial trees and tall grass ornamenting a winding catwalk that travels all the way across the arena floor.

Right as the second hour began, Timberlake and his background vocalists sat around a literal campfire, trading off vocals on acoustic covers of Fleetwood Mac, Lauryn Hill, The Beatles and John Denver.

Still, no guest vocalist — or perhaps any moment in the show, period — provided a bigger thrill for the audience than the not-too-surprising surprise appearance by Stapleton. The critically acclaimed country artist appeared alongside Timberlake, without an introduction, to sing their duet «Say Something» — an undeniable standout on «Man of the Woods».

The packed house at Bridgestone screamed at the sight of Stapleton, then got even louder as he took the lead. It was the first time the two artists had shared the stage at Bridgestone since their famed collaboration at the 2015 CMA Awards — a performance that launched Stapleton into a new stratosphere of fame and prepared audiences for the new «Woods»-y Timberlake.

And like their last performance at the arena, this one had a bit of «Tennessee Whiskey».

«Now you know we can’t let you leave without playing this song», Timberlake told Stapleton. The pair then led the crowd in an arena-wide singalong of the George Jones hit.

It wasn’t the easiest act to follow, but Timberlake managed by closing the show with a winning streak of hits, from the career-establishing «Rock Your Body» and «Like I Love You» to his disco-inspired victory lap «Can’t Stop the Feeling!»

«Tennessee, I love you so much», he said before taking his final bow.

Wednesday’s show also featured a performance from Nashville-based funk/R&B/pop band the Shadowboxers, who are opening for Timberlake through the entire tour. Timberlake and The Shadowboxers have been friends since 2013, when he discovered the band’s cover of his «Pusher Love Girl» via Twitter.

The Shadowboxers will headline their own show at the Basement East in Nashville on Thursday, May 10.