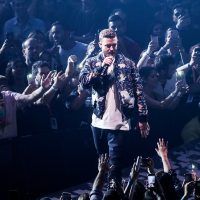 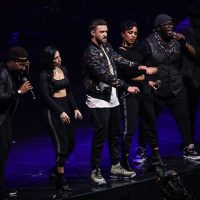 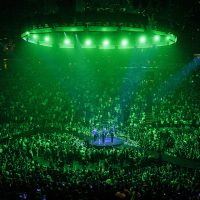 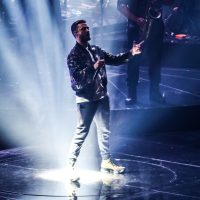 WSVN — Music fans gathered at the American Airlines Arena in Downtown Miami as Justin Timberlake delivered some of his chart-topping hits.

It’s been an amazing year for singer Justin Timberlake.

He released his fifth studio album, «Man of the Woods» and has set out on a world tour.

Timberlake’s new music isn’t just inspired by nature, but is also a nod to his home state — Tennessee.

His wife, actress Jessica Biel, even appeared in one of his music videos to show support for his new evolved sound.

Timberlake added a touch of southern to his songs as he did doing a country/rock inspired single with Chris Stapleton called «Say Something».

He performed at the Super Bowl and then took his music on the road.

Timberlake made a South Florida stop, Friday. «I’m so excited!» said one fan. «We love Justin Timberlake», said another.

Crews spoke to a fan who wants a bit of the old. «I’m bringing Sexy Back», another sang.

While the Northern American portion of his tour is on schedule, Timberlake announced on Friday that some stops in Europe will be postponed and rescheduled.

Justin Timberlake Gets Woodsy and Wild in Miami

Miami New Times — If a tree falls in the forest and no one is around, no one hears it. But if a Justin Timberlake sings in the woods, everyone in Miami hears and likes it.

Justin Timberlake brought his Man of the Woods tour to American Airlines Arena on Saturday, delivering a wild (pun intended) experience. He hits the BB&T Center in Sunrise on Saturday.

The evening opened with Justin Timberlake! OK, so, no, Justin Timberlake really didn’t open for himself, but Marlins-clad DJ Freestyle Steve spun some beats, half of which were Timberlake songs. It felt weird listening to a bunch of songs we’d hear live in less than an hour. The other half of his set was comprised of songs like «Low» by Flo Rida, which a healthy percentage of the crowd probably drank to pre-show.

Next up: The Shadowboxers, a sixsome from Atlanta whose EP Apollo dropped in March. Collectively, they sounded sort of like Justin Timberlake or maybe Bruno Mars, but it just fell completely flat, with the exception of a few groups of girls screaming at them. The Shadowboxers’ energy, bouncing around the stage and generally poppy tunes were admirable. But it just didn’t feel right echoing off the walls of an arena sparsely occupied by a bunch of people who didn’t know what they were watching.

After another DJ set by our friend Steve — with little to no Justin Timberlake the second round — it was time for Timberlake to take the stage. And let’s talk about this stage. It was a shiny-surfaced, «S» with an extended squiggle, sprouting dark, brassy trees and culminating in an ovular, multilevel stage. Midway, there was a bar with en about 50 stools. Those seats were probably not cheap.

The trees lit up, and a light emerged like a midnight train. Then out walked Justin Timberlake. Wilderness-esque scenery flashed on screens, as they did throughout the evening. There were mountain ranges, lakes, pine trees, and roaming horses.

He opened the evening with «Filthy», his generally hated and blah new single. It shouldn’t be hated all that much live, especially given Justin Timberlake’s skillful moves, his six stellar backup dancers, and beloved 15-piece band, the Tennessee Kids. But it was still nice to get that song out of the way up front.

The Tennessee Kids were a highlight and could probably sell out a tour of their own. The only downfall? In some instances, like during «LoveStoned» and «Man of the Woods», you couldn’t hear Timberlake at all. That’s bound to happen when you have backup singers who could easily lead their own bands.

You can tell Timberlake has fun with the Kids and his dancers. A highlight of the set was all of them sitting around a campfire and benches — yes, there was a real campfire on stage — and singing classics like the Beatles’ «Come Together», John Denver’s «Thank God I’m a Country Boy» and «Dreams» by Fleetwood Mac.

Justin Timberlake’s set lasted a high-paced two hours and 10 minutes, rolling through many hits including «Cry Me a River», in which the entire-stage contraption turned into a river of fog. There was also «Rock Your Body», where a section of the floor turned into a discotheque; «Señorita», where Justin Timberlake played the piano while spinning around in a circle; and «Suit & Tie», where Timberlake essentially twirled the mic stand around like a baton, to deafening applause.

He closed the evening with «Can’t Stop the Feeling» and, yes, everyone went nuts.

At one point, Timberlake said, «There is something crazy about this crowd… and, if you’re not careful someone might get pregnant».

It’s safe to say that Timberlake definitely made Miami crazy, and someone probably got pregnant afterward.