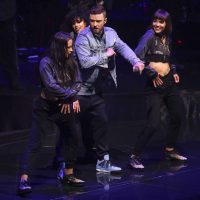 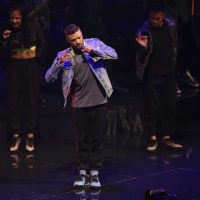 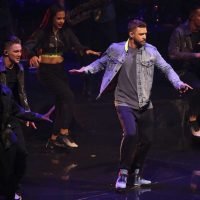 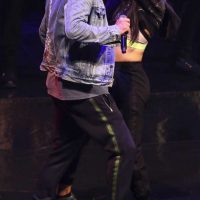 Culture Map — Justin Timberlake, the most successful solo performer of the post-boy band era, rolled into Toyota Center on Wednesday, May 23 with The Man of the Woods tour and quickly made it his own, rocking a party rarely seen in an arena-sized venue. He led the more-than-receptive audience through approximately two hours of hits, utilizing his multiple talents and inordinate charisma to put on an excellent show.

The night’s crowd consisted of 85 percent women, ranging from mid-thirties and above, with 15 percent supportive boyfriends and husbands along for the ride as their ladies screamed and danced for another man. Then again, that man is more talented than almost every other on the planet when it comes to performing pop music, and Justin Timberlake’s long career as a performer shined throughout the night, giving the women in the crowd (and their fellas) everything they came to see.

He brought with him a 15-piece entourage, replete with a full band, team of dancers, back-up singers, and brass section (shout out to the tuba/trombone player). But it was the production that was most impressive, the stage itself a twisting, river-like structure that covered almost the entire length of the arena floor, with multiple points serving as places to execute expertly choreographed numbers, giving each part of the venue a chance to see the performers up close. Being the Man of the Woods tour, two sets of trees adorned certain points of the stage and even a patch of grass(!) decorating the far end of the set-up. The stage featured impressive lighting rig and three sets of screens hung from the ceiling that allowed great views from anywhere in the house, not an easy thing in a venue that seats nearly 20,000 fans.

Timberlake, requisitely decked out in a denim jacket, kicked off the evening with the slow-build of «Filthy», the first single from the tour’s namesake album. Any negative reviews of that album were washed away with his ultra-tight, professional backing band elevating the material. The biggest screams early came with the one-two punch of FutureSex/LoveSounds tracks «LoveStoned» and «SexyBack» — that album’s songs would get the biggest response throughout.

The first, and longest, third of the set’s highlights included an expert dance breakdown during «Suit & Tie» from the night’s most underrepresented double album, The 20/20 Experience, and an impressive version of still-great «Cry Me a River» from Justin Timberlake’s first solo album, 2002’s Justified. It was simply hard to fathom how much work went into planning and executing the extensive song and dance numbers of the 27-song concert – the professionalism on display was mind-boggling.

Any criticism from the show came during the «Campfire» mid-section of the show, when members of Timberlake’s backing band convened around an actual campfire at the far end of the stage, complete with log benches, acoustic guitars, and blankets. This section included a series of covers, almost exclusively sung by his backup vocalists, including Fleetwood Mac’s «Dreams», and Lauryn Hill’s «Ex-Factor». A cover of John Denver’s «Thank God I’m a Country Boy» was a little too on the nose.

The middle section may have slowed the momentum and intensity of the opening third of the show, but it was purposeful, as there was no way anyone’s voice or body could sustain the energy of the earlier numbers. Thankfully, the mini-set was largely abbreviated and it quickly morphed into the final third of the act when Timberlake built back the earlier energy levels.

Highlights from the final third included a rousing, uplifting version of «Say Something» from Man of the Woods; «Rock Your Body», replete with a dance number on lit up diso floor that recalled the heights of popularity of MTV’s Total Request Live; and the exclamation point of a finale in the Oscar-nominated track, «Can’t Stop the Feeling», from the universally adored Trolls movie.

During this part of the show, Justin Timberlake sported a Santa Fe Strong shirt, calling out his support of the high school that recently suffered the country’s latest mass shooting. A final dedication to the students of Sante Fe added a classy, personalized touch that ended the show on a poignant high note.

As for the openers, The Shadowboxers did a serviceable job in getting the crowd warmed up with tunes that were right in the Timberlake wheelhouse with Bee Gees inflected, harmonized pop songs. A cover of Michael Jackson’s «Remember the Time», was a highlight.

Before and after The Shadowboxers, DJ Freestyle Steve was a fantastic hype man, raising the temperature of the Toyota Center to boiling point with well selected, old school hip-hop tracks. One of the best received moments of the night came when he invited former Texan wide-receiver Andre Johnson for some much deserved, hometown love.

Much like his musical output, the show was a sometimes a little bloated, but overall, the production, stage set-up, and Timberlake’s tremendous charisma as a performer won the night. Thankfully, for those on the fence about purchasing tickets, there are still a few left for May 25’s show. After witnessing Wednesday night’s triumphant performance, this concert is worth the price of admission for both casual and diehard Timberlake fans alike. Don’t miss out.

Chron — Timberlake, after all, is pop royalty, thanks both to his tenure in *NSYNC and his solo career. It’s a trait that was impossible to camouflage, despite valiant attempts, during Wednesday night’s show at Toyota Center. He returns Friday to the venue and makes a third stop in January.

He pushes hard against the flash. Timberlake spent most of the show in a T-shirt and jogging pants, dressing it up with a denim jacket and flannel. The stage, though elaborate, was bare in many ways. The visual projections were of clouds and trees and wolves. He urged Houston to «shake your country ass». Remember, he’s a man of the woods, y’all.

At the same time, he was surrounded by sharp dancers and vibrant band members. A small stage in the middle of the venue doubled as an actual bar. Bartenders served drinks to fans surrounding the stage. A pair of runways snaked out on either side, decorated with leafless trees. The band was on a sloped stage in the traditional location.

It was enjoyable, to be sure. But at times, the show seemed to suffer from an identity crisis. Song placement was an issue. «Supplies» and «Can’t Stop the Feeling» should have been performed earlier. «Cry Me a River» and «Mirrors», two of his best songs, should have come much later.

The sequencing made things feel disjointed and affected the crowd’s energy. He opened with «Filthy» and «Midnight Summer Jam» before launching into «LoveStoned» and «SexyBack». Those should have been switched.

Timberlake is still a lithe, charismatic dancer. His moves more than ever echoed Michael Jackson, from the wrist flicks to the high-pitched yelps. He also borrows heavily from Janet Jackson’s precise choreography.

Yes, folks were cheering and dancing. They seemed to be having fun. They knew the words to several songs. But it wasn’t at the level you’d expect for a guy with three shows at the same venue. There were more enthusiastic crowds at recent shows by Pink, Maluma and J. Cole.

And look — «Man of the Woods» is a flat-out terrible song. To make matters worse, Timberlake and a trio of male dancers performed it inside what looked like a fake corn field. Oh, the irony. If it was meant to be campy, it didn’t work.

The staging for several past hits wasn’t as dynamic as it should have been. He hopped on a piano for «Señorita». He turned «Suit & Tie» into a Broadway dance number. He mashed up his own «My Love» with Jay-Z’s «Big Pimpin'». (It was a perfect moment for a Bun B cameo. We all know he would have done it if asked.)

Timberlake shouted out the Houston Rockets and took a round of shots with his band before singing — what else? — «Drink You Away». There was also a weird short film about couples in love that preceded the campfire section, which included a literal campfire, bongos and someone in a straw hat.

That’s the other issue here. Everything, despite the illusion of being casual, felt choreographed. Huge shows like this need lots of direction, of course. But you shouldn’t be able to see it happening.

Even what should have been a heartfelt dedication — «We’re gonna light the whole arena, this whole city up for Santa Fe High School» — lacked emotional punch.

«Let those angels hear you up there», he said while singing a few lines of «Until the End of the Time».

Of the new songs that padded the set, «Montana» was the most intriguing, a swirl of disco, soul and electro-pop. Timberlake should have married that blend with his country-boy aesthetic for a more cohesive sound and a more compelling live experience.