The Man Of The Woods Tour, Dallas, TX, EE.UU. +2 imágenes 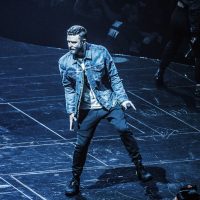 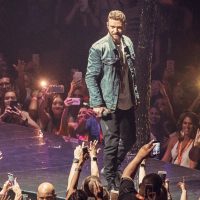 We Should Hate Justin Timberlake, But He Proved Sunday Night That’s Impossible

Dallas Observer — Everything was sexier Sunday night. The moms were excited to be out of the house. You could hear every man in the city alone at home, happy they escaped a night at American Airlines Center watching the man who brought sexy back.

«All I know is Justin is in there doing lunges and stretching», one woman said to her friends as they were waiting for the cop to motion for them to cross the street.

While waiting to go through arena security, hoards of women yelled like it was the first time they got to leave their house since Timberlake wore matching denim outfits with ex-girl friend Britney Spears.

«I’m scared», said an onlooking red-headed man to his girlfriend.

Before Timberlake even made his way on stage for his Man of the Woods tour, a DJ made sure to get the crowd as loose as possible by playing songs like «Wobble», «This Is How We Do It», and others moms enjoy during a moms’-night-out. Once Timberlake took the stage, the women went into overdrive. They recorded the concert on their phones. They danced to his songs. They recorded themselves on their Instagram stories dancing to his songs. They screamed when they heard a song they knew. They screamed louder when Timberlake replaced the words in «LoveStoned» with, «She looks like a model except she’s got that Texas ass». And they screamed the loudest when his dance move included grabbing his crotch.

Timberlake’s career has spanned 24 years if you count back to his days on The Mickey Mouse Club. After that, he went on world tours and was part of the biggest boy band at the time, NSYNC. After that group split up in 2002, he began his solo career and has recorded four albums and starred in countless movies. He’s the poster boy for what former boy-banders want to be. Justin Bieber and Liam Payne dream of this kind of career.

American Airlines Center was filled with undying fans simply because he has talent. Sure, Timberlake has been accused of cultural appropriation. He cried like an idiot when Ashton Kutcher punk’d him. He told Barbara Walters and the world he had sex with Britney Spears. He took none of the blame for the Janet Jackson Super Bowl wardrobe malfunction and then returned to the Super Bowl stage years later like nothing ever happened. If it wasn’t for his enormous talent, he might have crumbled like Bieber.

Timberlake sang songs from all four of his albums Sunday night (none from his NSYNC career). His stage snaked through the crowd, and he made use of every inch. Six backup dancers and four backup singers followed him, and for the first hour of the show, Timberlake didn’t stop once. It was hit song after hit song, finally ending with «Mirrors», when the entire arena lit up. That could have easily been his closer — in fact, a few people left after, thinking that was the end of his set.

But there was still an hour left and slower songs to be sung. After «Mirrors», there was a short break to readjust a few things. Overhead on the video board, a montage of couples talking about falling in love played. Once Timberlake finally re-emerged, a faux campfire and campsite lit the end of the stage. Timberlake and his dancers and backup singers sat around the fake fire while Timberlake strummed his guitar. He sang «Until The End of Time», «Flannel», and «Morning Light».

EXPAND
His backup singers also each got a solo. One played Fleetwood Mac’s «Dreams», another played «Come Together» by The Beatles. This slowed down the night, and audience members quickly lost interest after the second solo.

Timberlake was able to pick up the pace again. There were only a handful of songs he didn’t have a choreographed dance to. Right before the last few songs, Dallas Maverick Dirk Nowitzki hopped on stage to take a shot with Timberlake — not before a jab from the singer, asking, «Where is your ring?»

Timberlake ended the night with «Can’t Stop The Feeling», his Oscar-nominated song featured in the Trolls movie. He danced on every inch of the stage, leaving everything he had there. And we love him for it.

NBC — While the Dallas Mavericks’ 2017-18 season may not have lasted into May, that didn’t stop Dirk Nowitzki from making an appearance at the American Airlines Center Sunday.

During Sunday night’s Justin Timberlake concert at the arena, the 7-foot-tall career-long Maverick walked onstage carrying a tray of shots. Nowitzki proceeded to pass them out to Timberlake and his band.

In the video of the occasion, posted on the Mavericks’ Twitter page, Timberlake said he and Nowitzki have known each other since early in Timberlake’s solo career.

«This guy came to see me when I did my first show here, years and years ago, Timberlake told the crowd. «And after the show he was like, ‘Why you did not close with ‘Rock Your Body?» I said, ‘That’s good advice, Dirk. Why you don’t got no ring yet?’ But then the rest is history».

«Justified», Timberlake’s first solo album, came out in 2002 – nearly a decade before the Mavericks beat the Heat in the 2011 NBA Finals to give Dallas its first and only title.

Timberlake went on to give shout outs to his keyboard player and one of his dancers, who he said are both from the Dallas-Fort Worth area, before the entire group raised a glass to Nowitzki.

Nowitzki confirmed in April that he will return to the Mavericks for his 21st season with the team in 2018-19. Timberlake will play a second show at the American Airlines Center Monday night, and return again in January 2019 for another visit.