The Man Of The Woods Tour, Columbus, OH, EE.UU. +32 imágenes 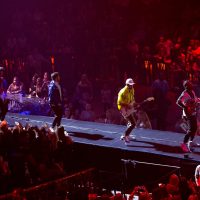 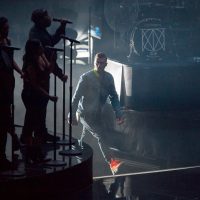 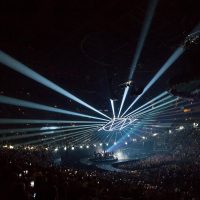 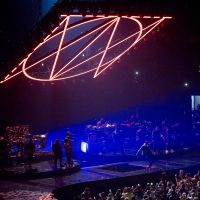 The Columbus Dispatch — With his flannel shirts and tree-themed set design, Justin Timberlake was a Walden Pond wannabe during his electrifying two-hour set Monday night at Nationwide Arena.

Promoting his latest release «Man of the Woods», the 37-year-old was no detached and distant Thoreau, but a colorful force who more than proved his right to remain an A-list pop star more than 20 years after getting his start in boy band NSYNC.

A few minutes after 9 p.m., a blinding light emanated from one end of the stage configuration, illuminating the massive bandstand holding 14 vocalists and musicians.

It shined across the snaking black catwalk that ran the length of the room, along which was situated a built-in bar where VIP attendees could buy booze and six glittering faux trees. Later in the set, see-through screens descended from the ceiling, onto which were projected calming scenes of forests, mountains and poppy fields.

After a few minutes of mysterious instrumental music, Timberlake emerged in the aforementioned flannel shirt, plus orange sneakers and a denim jacket.

He popped and locked with his six skilled backup dancers to «Filthy», the electro-funk opener off of «Man of the Woods» before bouncing down to the round stage in the center of the room for second album track «Midnight Summer Jam», which sounded pretty much like its name implies it should.

With a name mashing together two natural terms, maybe it was kismet that Timberlake released an outdoorsy album. Regardless of his reasoning, the result departed from the R&B/neo-soul of his first three records to encompass hints of bluegrass and country.

While «Man of the Woods» often felt overwrought, Timberlake massaged its weakest parts — drum machines over acoustic guitar, for instance — for the live show. The singer’s careful choreography and use of a live band rather than relying on backing tracks softened weaker songs (funky «Montana») and elevated strong moments.

The first allowed him to flex his warm tenor and crystalline falsetto, despite the sludgy vocal mix plaguing the first half of the show. The second showcased his controlled dance steps.

An interlude in the middle — with Timberlake in a different flannel shirt — gathered several musicians, dancers and singers around a real(!) fire to sing acoustic covers, including Lauryn Hill’s «Ex-Factor» and John Denver’s «Thank God I’m a Country Boy».

Timberlake kept his stage banter to a minimum, preferring to move his feet rather than his mouth.

After two hours with barely a break, he mustered a final burst of energy for his most popular song«,Can’t Stop the Feeling». The tune, from 2016 animated movie «Trolls», is one that parents of young children might prefer out of their heads forever, but it sent Monday’s cheerful crowd dancing into the chilly night.

The Shadowboxers, a six-piece pop group signed to Timberlake’s development label Villa 40, opened the evening with a synchronized set of singable summer songs.

Columbus Alive — «That’s how it goes down on a Monday in Columbus», Justin Timberlake confidently told the crowd at his recent performance at Nationwide Arena.

The «Man of the Woods Tour» stop took place about six months after Janet Jackson brought her politically minded «State of the World Tour» to the city; less than two weeks after Kanye West shared his signed «Make America Great Again» hat; and two days after Childish Gambino released his jarring «This Is America» video.

So, while other mainstream stars are responding to the current political climate, Timberlake escaped to the woods with a comparatively safe concert, focusing on showmanship and music absent heavy political messages.

Additionally, controversy surrounding Timberlake has tapered. Little has been said about his role in Jackson’s infamous 2004 Super Bowl wardrobe malfunction since the Super Bowl halftime in February, which Timberlake headlined (some deemed the event «Janet Jackson Appreciation Day» to take the spotlight away from Timberlake). And the anger of Prince fans seems to have subsided since Timberlake’s polarizing tribute to the late superstar during that performance.

Generally, Timberlake’s popularity has ebbed and flowed. While his 2018 album, Man of the Woods, debuted at number one, generating two top-10 hits with «Filthy» and the Chris Stapleton-assisted «Say Something», the album fell out of the top 10 by its fourth week. It has since been certified gold — a respectable achievement these days — but, by comparison, the first half of two-part project The 20/20 Experience went double-platinum in its first month of release in 2013.

Regardless, Timberlake remains a safe-bet as a performer, and he put on an enjoyable show at Nationwide. Fully committed to the outdoorsy, countryman theme of his latest album, he performed on multiple tree-dotted stages connected by a narrow pathway constructed to mimic a walk through the forest. Multiple giant screens grouped in two cylinders above the stage displayed blue skies, mountains, country pastures and roaming buffalo throughout the show.

For the most part, Timberlake stuck to a simple outfit — black pants, flannel, a jean jacket and boots (you can dress like him by buying MOTW merch, which surprisingly missed an opportunity to capitalize on his song «Supplies» with camping gear).

Backed by his talented and vibrant dancers and the Tennessee Kids band (including former Prince guitarist Mike Scott and a horn section complete with a euphonium!), Timberlake opened the show with new songs «Filthy», «Midnight Summer Jam», «Man of the Woods» and «Higher Higher», interspersed with old favorites «Lovestoned» and «Sexyback».

But the show arguably reached another level when the tinkling piano chords of 2003 hit «Senorita», rang through the stadium, quickly reinforcing that Timberlake’s back catalog is stronger than his latest offering. He followed that song with an engrossing performance of «Suit & Tie». On the track, Jay-Z instructs listeners to «sit back and enjoy the light show», which Timberlake brought to life with a dazzling solo dance break that included impressive manipulation of a microphone stand. The woman sitting next to me was so moved she had to sit down.

Timberlake closed out the segment with more strong hits from years past, reinventing «My Love» and «Cry Me a River» on his drum machine, and ending «Mirrors» on his knees to deafening roars.

After the requisite «O-H, I-O» chant and cliche admission that Columbus was the «craziest crowd so far» in his tour, Timberlake strapped on his acoustic guitar and launched into his country song «Drink You Away».

Following a stirring rendition of ballad «Until the End of Time», Timberlake and his band sat around a real-life campfire onstage and played covers, including Lauryn Hill’s «Ex-Factor» and the Beatles’ «Come Together». He closed the slower portion of the concert with «Morning Light, «What Goes Around Comes Around» and «Say Something».

Timberlake ended the concert with a string of songs — older hits «Summer Love», «Rock Your Body» and «Like I Love You» among them — played in quick succession before the buoyant finale, featuring «Can’t Stop the Music».

Throughout the show, Timberlake performed like an artist with nothing left to prove. His dance moves — quick spins and fast footwork — were effective, but not spectacular or innovative. He appears to just have a basic handle on guitar and piano. His voice was clear and consistent, but, with the exception of «Drink You Away», he missed some opportunities to really showcase his range.

That isn’t to say he was sleepwalking through the show; his joy of performing is apparent. That he can deliver such a solid performance is the result of decades of honing his skills. And while he hasn’t blatantly used his art to comment on society, he certainly provided a woodsy escape from the turmoil of the world for one night.

Justin Timberlake entertains, yet loses identity in «Man of the Woods» Tour

The Lantern — Justin Timberlake can do it all.

He can sing. He can dance. He can sing and dance at the same time. Yet, as he traveled to Columbus on Monday night as a part of his «Man of the Woods» world tour, he performed like he felt he had something to prove and it showed.

Donning a blue jean jacket and a pair of bright orange shoes, Timberlake entered Nationwide Arena to a roaring crowd, beginning his set with «Filthy» and «Midnight Summer Jam», the first two songs off his latest record «Man of the Woods».

However, it did not take very long for Timberlake to get to what the crowd wanted to hear. With a strong tenor voice and an unmistakable falsetto, the former NSYNC member weaved his way through his catalog in the first half of his set. With lively drums, electric guitar and a four-piece horn section, Timberlake used his 15-member backing band to make songs like «My Love» and «Mirrors» sound brand new.

That level of orchestration did not work for all of the hits he performed. Beginning the song at his drum pad, tapping out the familiar beat created by Timbaland, Timberlake emphasized the simplicity of one of his original hits «Cry Me a River». However, as the song continued, the build from the backing band continued on, erasing any sense of the original beat that put him on the map as a solo artist in the first place.

As the show continued, the headliner began to focus more and more on his latest record. Putting on a red flannel, Timberlake and his band, what he called «The Tennessee Kids», sat around what seemed to be an actual campfire, playing his attempted ode to country/Americana music such as «Drink You Away», and «Flannel».

He also used this opportunity to showcase his backup singers, each picking a cover, such as «Dreams» by Fleetwood Mac or «Thank God I’m a Country Boy» by John Denver, to show what they could do individually. This was the point where the crowd became bored, with the majority of those in seats sitting down and losing interest.

Without much critical praise for his latest record, this part of the show felt like Timberlake forcing those in attendance to appreciate his new-found take on popularizing country, trying too hard to make it more mainstream or radio-friendly than it was considered to be.

As this part of the set ended, Timberlake actually succeeded in the heartfelt, acoustic sound he had been looking for in the entire show. However, it was not from any song from «Man in the Woods». With his band surrounding him on a platform in the middle of the arena, he serenaded the crowd with an acoustic rendition of «What Goes Around, Comes Around», allowing the crowd to focus on the lyrics more than the beat behind it.

In the final part of his set, Timberlake went back to what he is good at, dancing with his backup dancers and entertaining the crowd with his older hits, such as «Rock Your Body», «Summer Love» and «Like I Love You».

Ending the show with «Can’t Stop the Feeling», Timberlake left on a high note, with everyone in Nationwide Arena dancing and singing along.

In the 16 years he has put out solo material, Timberlake has made himself one of the more engaging performers currently in the music industry, showing that with his slick dance moves and singing voice on Monday night. However, promoting what many have considered as a sub-par record, Timberlake tried too hard to make that the main idea of his show, which affected its overall quality.