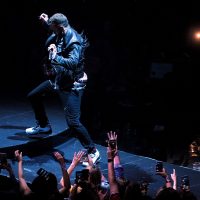 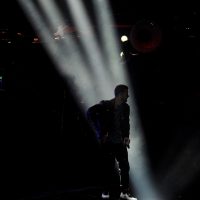 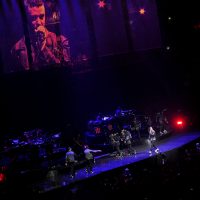 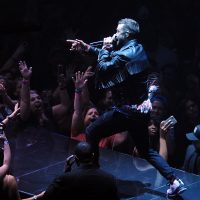 AJC — Justin Timberlake’s «Man of the Woods» album didn’t turn out to be the genre-bending, stratospheric release that was clearly the playbook for his long-awaited return.

But while Timberlake’s fifth studio release was more shrug worthy than career defining, his tour to support it is a masterstroke of ingenuity.

Two months into the live presentation, Timberlake and his expert backing band, The Tennessee Kids, have perfected a two-hour show that deftly magnifies a set list spanning his 15-year-plus solo career, Timberlake’s walking-on-air dance moves, his goofy, Everyman likeability and a stage that is truly inventive.

Rarely does a production utilize the entirety of an arena as smartly as this, with a standard end stage connected to a snaking catwalk (sort of like a river — you know, woods, river, get it?) with two smaller stages in the center and opposite end. Sparse (fake) trees decorate it in spots, and during certain songs, grassy tufts sprout from the stage floor. Overhead, three circular scrims lower and raise, alternating scenes of forest-y delights and the onstage action.

And Timberlake juggles it all effortlessly.

At the start of the show, he followed what seemed like 47 members of The Tennessee Kids out from a lighted hallway as lasers traced him across the stage during the underwhelming opener, «Filthy».

But Timberlake immediately worked every cranny of the winding stage, moving fluidly with his pack of dancers through «Midnight Summer Jam» and «LoveStoned».

Despite every heel lift and pinky twitch being choreographed, Timberlake is so graceful, he makes it all look natural, as if he glides through life on a cloud.

Even when jerking his arms sideways and dusting off his sneaker tops during «SexyBack» and looking as if he were ready to «bring it on in to Omeletteville», he exuded cool. And his band, those taut, funky Tennessee Kids (including Atlantan Justin Gilbert on keys), can bring warmth to anything, including the robotic clip-clop of «SexyBack» and «My Love», which featured a searing rock guitar solo by Mike Scott.

In addition to his charisma and dancing, Timberlake also sounded Courvoisier-smooth throughout the night, painting «Higher Higher» and «Cry Me a River» with his falsetto and injecting his cocked-eyebrow swagger to «Senorita», on which he played keyboards and directed to the fans seated behind the stage.

There were a few moments when the show felt weighted by indulgence — «Suit & Tie» was more about Timberlake’s spotlight dance with a crimson microphone stand, and his dabbling on an electronic gizmo that produced the synth stabs on «My Love» quickly grew dull — but Timberlake is such a consummate entertainer that his next move draws you right back in.

«I’ve never had a bad time in Atlanta, I can tell you that much», he told the spirited, sold-out crowd that ranged from tipsy 30-somethings in stilettos to their moms to couples having a date night.

He and The Tennessee Kids downed shots (from the bars conveniently located on both sides of the center stage — VIP ticket alert!) before launching into the visceral «Drink You Away».

Another unique element to Timberlake’s show is the elaborate campfire scene set up at the end stage. Fresh from a costume change into artfully ripped jeans, an outdoorsy jacket and a plaid guitar strap — Timberlake used the opportunity to strum the sweet «Flannel» and «Until the End of Time»; he then turned the moment into a generous showcase for his backup singers, who performed favorite covers from Fleetwood Mac («Dreams»), Lauryn Hill («Ex-Factor»), The Beatles («Come Together») and John Denver («Thank God I’m a Country Boy»).

At only 37, Timberlake still has much time to continue his growth as a musician and performer — and, as he proved, he’s already crafted plenty of timeless anthems. After all, the layers of bitterness in songs such as «What Goes Around…Comes Around» and «Cry Me a River» are no less stinging today, and «Rock Your Body» and «Summer Love» remain dance floor catnip.

Timberlake’s tireless performance is admirable, but it’s his commitment to surpass expectations that will always keep him in the game.

Opening the show was The Shadowboxers, a band with origins in Atlanta and a soul-pop connection to Timberlake.

The founding trio of Adam Hoffman (vocals, guitar), Matt Lipkins (vocals, keyboards) and Scott Tyler (vocals, guitar) formed a decade ago after meeting at Emory Univeristy (fans of the Indigo Girls might recall their years playing behind Emily Saliers and Amy Ray) and have been on the Timberlake tour since mid-March.

Later that month, the group, which is a six-piece onstage, released the EP «Apollo».

The guys are a blast onstage, swapping instruments, trading vocals and engaging in coordinated dance moves.

Songs including «Brakes» and «Wolves» zipped along with pep, but their breakout tune, «Time Zone», with its chugging guitar and multi-layer harmonies, deserves far more attention than Internet play.

«Just a few years ago, we were in Decatur playing Eddie’s Attic», singer Hoffman said, looking around the packed venue, «and now we’re in arenas».

They’ve got the sound, the chops and the connections — expect to see them on bigger stages more often.

Gwinnett Daily Post — Justin Timberlake brought his «Man of the Woods» tour to the Infinite Energy Arena on Friday night.

A sold-out crowd, mostly women, danced and sang throughout the night as Timberlake and his band played a variety of tunes.

Timberlake opened the night with «Filthy» off the «Man of the Woods» album, and mixed other new songs with hits «Sexy Back», «Suit and Tie», «Cry Me a River», «Rock Your Body», and «Can’t Stop the Feeling».