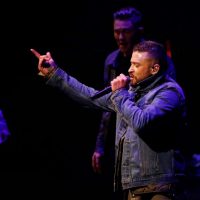 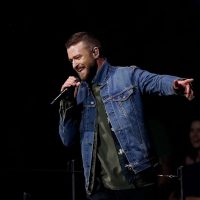 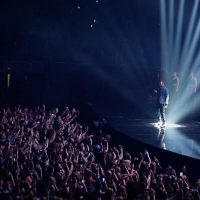 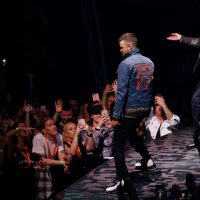 SFGate — There’s an art to making a massive space seem almost intimate. And for the first of two consecutive nights in downtown San Jose, Justin Timberlake seemed to downsize the cavernous SAP Center through showmanship, an indefatigable performance and a generous assist from a well-designed set.

The two-hour concert Tuesday, April 24, showcased 27 songs, mostly of Timberlake’s solo hits spanning as far back as 15 years and recent album cuts. Touring in support of «Man of the Woods», his fifth and latest album, the Tennessee native referenced its aesthetic with stages that featured a scattering of leafless trees and by wearing a denim jacket and plaid shirt.

An ingenious multistage setup was immediately noticeable when entering the arena. It had a smaller main bandstand than most concerts presented at the venue where the Sharks play hockey. There were also three smaller performance areas connected by catwalks that snaked across the general admission floor.

Having a quasi-in-the-round setup shrank the arena by providing amazing sight lines throughout the night for the sold-out crowd. The Tennessee Kids, Timberlake’s dozen-plus-member band (including a four-piece horn section), would often perform in the main area that served as an elevated orchestra pit, while Timberlake went to one of the secondary areas with his backup singers and dancers.

The first half of the program emphasized the danceable portion of Timberlake’s songbook. «Filthy» and «Midnight Summer Jam», the first two tracks off of «Man of the Woods» (released in early February) were executed with tightly choreographed dance moves and an equally precise light show.

«LoveStoned» and «SexyBack», two hits from his 2006 «FutureSex/LoveSounds» album, maintained the momentum before the mellower «Man of the Woods» title track was presented on the far stage and Justin the Entertainer transitioned to Timberlake the Troubadour.

For «Señorita», from his 2002 debut solo album, «Justified», Timberlake played a Fender Rhodes piano and faced the section behind the main stage before he and his fellow musicians were slowly turned around 180 degrees to once again face fans on the floor. He also strummed on acoustic guitar and played samples on an MPC (Music Production Controller) later in the show.

But the three biggest highlights of the night were «Cry Me a River», which started with Timberlake sauntering over the fog-laced catwalks to electro-leaning accompaniment before the song concluded with a rock n’ roll crescendo. «Say Something» from «Man of the Woods» and the Oscar-nominated «Can’t Stop the Feeling!» from the animated film «Trolls» helped end his show on a bouncy, energetic note.

Though it was clearly Timberlake’s night, he was mindful to share the spotlight. Whether it was a brief drum and percussion duel at the end of «Señorita» or each of the three vocalists singing portions of a covers medley in a «great outdoors» segment that featured a working campfire, almost every musician enjoyed a moment onstage.

«Here’s to 48 crazy hours in the bay», Timberlake said, toasting his bandmates atop the middle platform with drinks poured from one of the two bars onstage.