The Man Of The Woods Tour, Inglewood, CA, EE.UU. +6 imágenes 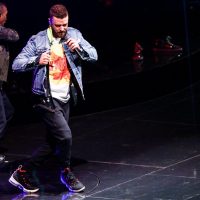 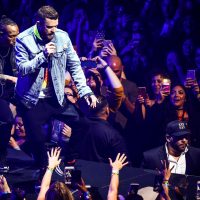 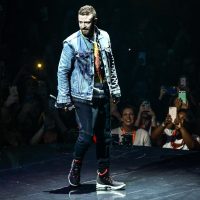 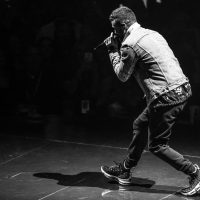 Los Angeles Daily News — Justin Timberlake opened his night at the Forum with «Filthy», the lead-off single from his current album, and while it’s a companion piece of sorts to his 2006 smash «SexyBack» — the songwriting and electro-pop beats once again the work of Timberlake, Timbaland and Danja — it’s also a defiant declaration of return after a few years away from the pop music scene.

«Haters gon’ say it’s fake — so real», Timberlake sang over and over as the song opened before he declared with a lyrical nod to his friend Jay Z, «I guess I got my swagger back».

And over the course of the two hours and 28 songs that followed he absolutely backed up that boast, delivering a standout night of music that celebrated the strengths of his new album, «Man Of The Woods». Timberlake performed all the past hits fans could want, and threw in a few unexpected covers, all of it staged in the kind of visually creative live production that modern pop superstars demand.

The show was essentially performed in the round, a large open stage at one end of the arena and a pathway that snaked its way to a circular stage in the center of the floor and a third stage at the far end of the walkway. All of that gave Timberlake and the Tennessee Kids, his troupe of 11 musicians, six dancers and four backing vocalists, room to roam as the performance unfolded.

«Filthy» emphasized the clubby vibe of Timberlake’s music, not just in the squelchy groove of its synths and dual drummers, but in the lasers that danced on the floor with his feet or pierced the darkness of the Forum.

«Midnight Summer Jam», which followed, offered another flavor, dance-oriented like «Filthy» but presented in a more pastoral setting, with wilderness vistas projected on scrims that descended at times over the different stages in the arena, and on the title track a bit of artificial grass on the remotest platform to really give it a we’re-in-the-outdoors-now feel.

A third of his set came from the new record, with 2006’s «FutureSex/LoveSounds» still his biggest album, the next most prominent, offering up the slinky «LoveStoned» and pulsing «SexyBack» early in the show to the thrill of the crowd on this first of two sold-out nights at the Forum.

Other first half highlights included the Latin-tinged «Señorita» from his debut album «Justified», performed with Timberlake playing keyboards while facing the open back of the stage so that fans there could get a bit of attention, too, and the retro-soul of «Suit & Tie», done partly in a dance with his microphone stand inside a circle of color-changing laser lights.

«Cry Me A River» and «Mirrors» wrapped up what was essentially the first hour-long set of the night, the latter song seeing Timberlake shed the denim jacket he’d worn so far and reveal he was wearing a Justin Timberlake tour T-shirt underneath. It’s something I can’t recall another artist doing but maybe the tour dates on the back of their boss help them keep track of where they’re headed next?

I’m kidding, of course, and in a way the fact that he’s comfortable in his $40 merch only added to the homey feeling of the campfire sing-along that soon followed. Timberlake and most of the Tennessee Kids changed into denim and flannel to circle a campfire — actual flames, impressive! — for an acoustic set that opened with Timberlake singing the folky new song «Flannel» and a sweet version of the older «Until The End of Time».

After talking about how they all had stories to share around the fire Timberlake then generously shared the spotlight with his four singers, as each of them sang lead on covers from artists that included Fleetwood Mac, Lauryn Hill, the Beatles and John Denver, the campfire going out soon after a rousing run through «Thank God I’m a Country Boy».

The final run of the show picked up the pace again, featuring «Say Something», the most country influenced song on the new album, «Rock Your Body», which saw Timberlake and his dancers go into the VIP pit to transform it into a dance club for a bit, and «Supplies», another new track, this one the most hip-hop of any of the new songs.

«Like I Love You» led to the finale, «Can’t Stop The Feeling!» the uber-poppy feel-good anthem Timberlake did for the DreamWorks animated movie «Trolls». It was a fun, smile-inducing way to end the night, which completely made up for the mild disappointment of his overly frenetic performance at the Super Bowl halftime show earlier this year.

And given the increasingly inclusion of pop stars as headliners at the Coachella Valley Music & Arts Festival it would not be a surprise to see him there sooner than later.

Opening the night were the Shadowboxers, a pop-soul group from Atlanta that Timberlake has mentored, and signed to his label, in recent years. Though the crowd was still thin, they surely won over many with their energetic performance of songs including the self-titled track «Shadowboxer» and «Hot Damn!».

Access Online — Justin Timberlake is bringing more than just «SexyBack» on his Man of the Woods Tour.

The pop superstar shut down The Forum in Inglewood, Calif., for two sold-out shows on Saturday and Sunday night, delighting the crowd with a string of Justin Timberlake classics combined with fresh tracks off his latest smash album — and a couple of surprises.

After opening with «Filthy», the lead single off «Man of the Woods», Justin Timberlake doled out hit after hit for the first half of his set, knocking out the one-two punch of «LoveStoned» and «SexyBack» before diving into other faves like «Senorita», «Suit & Tie» and «My Love».

With his band The Tennesee Kids by his side, Justin Timberlake switched things up with a sing-a-long of Dr. Dre and Tupac’s «California Love» before slowing things down mid-concert for a series of covers during the gang’s campfire set, performing iconic songs like Lauryn Hill’s «Ex Factor» and The Beatles’ «Come Together».

Don’t think they didn’t turn the tempo back up, though.

Older favorites like «Summer Love», «Rock Your Body» and «Like I Love You» kept fans on their feet before the closing number «Can’t Stop The Feeling!» (of course!) ended the evening on a dance-friendly note.

Those lucky enough to score ground floor spots thanks to Verizon’s new rewards program Verizon Up got to see Justin Timberlake do his thing up close and personal, as the multi-threat made his way back and forth between the main stage and a performance platform right in the center of the arena.

In addition to Justin, Verizon Up has partnered with other hitmakers including Demi Lovato, Luke Bryan and Maroon 5 to give Verizon customers the exclusive opportunity for once-in-a-lifetime experiences with their favorite musicians — from meet-and-greets to front-row access and more.

And, it’s possible to go behind-the-scenes for closed studio sessions and even private dinners with breakout artists like Daya, Skyler Gray, Rich The Kid and Rae Sremmurd in personalized intimate events.

For more information on all the VIP rewards offered through Verizon Up and how to become a member, click here.