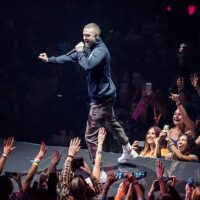 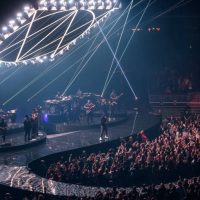 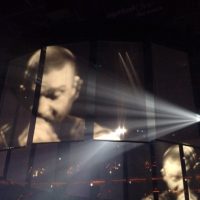 Baltimore Post-Examiner — A trip to the woods isn’t complete without a campfire.

Midway through Justin Timberlake’s concert on Sunday night, he took a break from playing his pop hits, gathered nine members of his «Tennessee Kids» band, pulled out his acoustic guitar and turned Capital One Arena into a campfire sing-a-long.

Timberlake, in one of the many highlights of his «Man of the Woods» tour that’s named after his recent studio album, strummed his guitar while his «Kids» covered classic songs «Dreams» by Fleetwood Mac, «Ex-Factor» by Lauren Hill, «Come Together» by The Beatles» and John Denver’s «Thank God I’m a Country Boy», while the capacity crowd of more than 20,000 sang with them.

At 37, Timberlake is showing no signs of slowing down. He burst onto stardom as part of NSYNC in the 1990s and has gotten better as he’s gotten older. He proved he could be a one-man show in 2002, when his debut album, «Justified», produced four major hits — «Like I Love You», Cry Me a River«, «Rock Your Body» and «Señorita«. Four years later, «FutureSex/LoveSounds» was nominated for a Grammy and 2013’s «20/20 Experience» had album sales exceeding 10 million.

Timberlake paid homage to his entire body of work in the nation’s capital, where his 26-song, two-hour show combined complex visual technology with all of the hits songs that have made him the planet’s biggest pop superstar.

Timberlake’s performance was more spectacle than show. He rarely stopped moving upon opening with «Filthy» and going right into «Midnight Summer Jam», «LoveStoned» and «SexyBack». Every song on his list, which «Man of the Woods», «Higher Higher», «Señorita», «Suit & Tie», «My Love» and «Cry Me a River» within the first hour, were all choreographed differently. Timberlake’s ability to intricately blend his choreography with hints of Michael Jackson and Prince captivated the audience’s attention on a very crowded stage.

«That was just the foreplay», he told the crowd after «Cry Me a River. «This party has just started».

He was flanked by his «Tennessee Kids» band that featured singers, two drummers, tuba players, a saxophonist, a trombonist and two keyboardists who blended their sounds seamlessly while they were surrounded by several dancers and huge video screens that turned every song into its own movie.

After playing «Mirrors», «Drink You Away», and «Until the End of Time», Timberlake needed to slow it down, which is when he pulled out his acoustic guitar for his campfire sing-a-long.

While Capital One Arena is one of the larger venues of its size, Timberlake made it as intimate as he could. He took advantage of a massive stage that included a catwalk that stretched the length of the floor and had a performance area surrounded by a bar for the select fans fortunate to buy a floor ticket. The catwalk, which was decorated with trees and holographic grass in reference to the tour’s namesake, provided Timberlake with an avenue to tour the arena while he belted out every song. At some point, nearly everyone in the arena felt like they were sitting just a few rows away from the stage, even if it was just for a few seconds at a time.

Once Timberlake’s acoustic segment was over, he finished the show as strong as he started it. He whipped the crowd into a frenzy with «Morning Light», «What Goes Around…Comes Around», «Say Something», «Montana», «Summer Love», «Rock Your Body» and «Supplies» before closing with last year’s summer smash hit «Can’t Stop the Feeling!»

«Every time I come here this place is lit», Timberlake told the crowd at Capital One Arena, which he’ll play again on Jan. 4. «I want to know what you are drinking».

The Shadowboxers connect as opening act

The next time The Shadowboxers play Capital One Arena, they might be playing second, not first, as they did on Sunday when they opened for Timberlake.

The Shadowboxers, who will release their debut album «Apollo» this week, should turn plenty of heads as the trio continues to open for Timberlake throughout his «Man of the Woods» tour.

Timberlake was sold on the trio’s unique sound, which blends harmony and funk, and signed The Shadowboxers to his development company, Villa 40. The Shadowboxers released their lead single, «Hot Damn!» off «Apollo» last September and have raised their exposure by performing on the «Today» and ‘The Talk».

The crowd gave its best response to the band’s love song, «Timezone» on Sunday night.

«We have been preparing for this moment now for a few years and it is so exciting to finally be staring down the release of this first EP and to celebrate by hitting the road with Justin Timberlake», the trio said in a statement. «We poured over these recordings and didn’t cut a single corner», the band said in a statement. «It feels really good to be releasing a body of work that truly represents who we are as a band and we can’t wait to play these songs every night on tour».

Justin Timberlake may feel at home in the woods, but the arena is where he shines

The Washington Post — Eleven years have passed since Justin Timberlake toured in support of his 2006 album «FutureSex/LoveSounds». The Madison Square Garden show was cut into an HBO special at a time when the singer stood tall at the center of pop music on the shoulders of a forward-thinking album. My, how times have changed.

Five years have passed since Timberlake compensated for an even longer full-length album hiatus by splitting «The 20/20 Experience» into two projects. The first break saw him break into acting and wed actress Jessica Biel; the latest saw him become a father. But the latest also saw him drift further from pop music’s nucleus — a distance felt on his latest album, «Man of the Woods». The album, which Timberlake said was inspired by his family and Tennessee roots, was strategically released two days before his record-setting third Super Bowl halftime performance (and the first since 2004’s «Nipplegate» incident, which has only hindered Janet Jackson’s career) and promoted with marketing collateral packed with Marlboro Americana.

Timberlake’s implied «rebranding» seemed to embrace his whiteness — alarming to many, in this era of reactionary viral outrage, because his success as a solo artist came from his embrace of black culture. The promo for «Man of the Woods» proved a provocative pump-fake, as the music was mostly standard Timberlake fare guided by his gurus: producers Timbaland and the Neptunes. Unfortunately, all the flannel in the world couldn’t warm critical reception to «Man of the Woods».

However, Timberlake will always find solace in arena shows packed with the adoring fan base he’s grown considerably since his days of pubescent Jodeci covers alongside Ryan Gosling on «The Mickey Mouse Club». Sunday night’s two-hour performance at Capital One Arena was a loud, clear reminder.

Timberlake took the main stage to the warped sounds of «Filthy» as a matrix of lights beamed through the venue. The introduction was reminiscent of the song’s video, in which Timberlake portrays a Steve Jobs-like figure. The turtleneck and glasses were replaced by the camouflage he and his dancers donned while marching to the other two stages adorned with fake trees.

The album’s theme was present throughout the evening, as tall mini-screens displaying aerial forest shots and close-ups of wolves surrounded the second stage. The sound of actual crickets filled the building between «Filthy» and «Midnight Summer Jam» — ASMR for any woodland folk in attendance. Timberlake even performed the album’s title track, a Neptunes-produced ode to Biel, amid faux tall grass. But for all of his woodsman pride, Timberlake remains at his most effective when performing hits from when he was better connected to the outside world.

On Sunday night, that meant jumping behind the keys for «Señorita», from his 2002 solo debut, «Justified». And behind a wood-encased music production controller that emerged from beneath the stage as Timberlake played notes of «My Love», a la Kanye West at the 2010 MTV Video Music Awards, before D.C.-born guitarist Mike Scott ripped through a solo. He returned to the MPC for the eerie «Cry Me a River» as smoke billowed along the walkway connecting the stages.

The evening’s turning point arrived when Timberlake and the majority of his band, the Tennessee Kids, migrated to the middle stage for celebratory shots and a minimalist performance of 2013’s «Drink You Away». The song is evidence of Timberlake doing blues-influenced music before wrapping his country-boy roots around an album concept. It was a smooth transition into the campfire portion of his set.

After grabbing an acoustic guitar for a stripped down rendition of «Until the End of Time», Timberlake allowed his background vocalists to «tell their stories» through covers of classics: Fleetwood Mac’s «Dreams»; a bluesy rendition of Lauryn Hill’s «Ex-Factor»; a soulful take of the Beatles’ «Come Together»; and John Denver’s «Thank God I’m a Country Boy» to complete the segment.

Timberlake kept the guitar for «Say Something», his «Man of the Woods» duet with country singer Chris Stapleton. On the bridge, he sang, «Sometimes the greatest way to say something is to say nothing at all». Despite a governing theme, «Man of the Woods» feels empty. Fortunately for Timberlake, many people enjoy empty fun.

The remainder of Timberlake’s set included a medley of past hits such as «Summer Love», «Rock Your Body» and «Can’t Stop the Feeling», his contribution to the «Trolls» soundtrack. But the final leg felt rushed, as though Timberlake was, in fact, racing to meet the curfew he alluded to earlier in the evening.

Still, Timberlake’s performance mostly met the suit-and-tie uniformity audiences have come to expect. «Man of the Woods» is a misstep, but it doesn’t demand a reappraisal of his career — no matter the positioning, he’s doing what he’s felt justified in doing since 2002.

Justin Timberlake may feel at home in the woods, but the arena is his true element. And hate it or love it, he’s reached ubiquity there. Accepting that is the true 20/20 experience.