The Man Of The Woods Tour, Toronto, ON, Canadá +58 imágenes 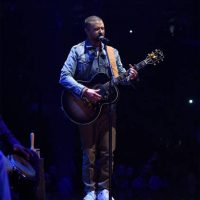 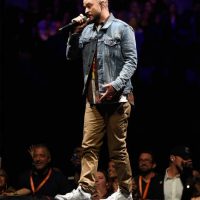 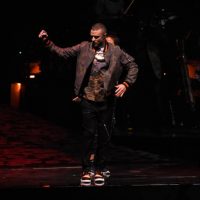 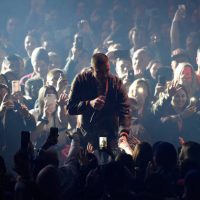 Toronto Sun — The Memphis-born Justin Timberlake is a Man Of the Woods on his 2018 album of the same name.

But on Tuesday night, as Timberlake launched his latest tour with the first of two nights at the Air Canada Centre, the 37-year-old singer-songwriter-producer was more like a man of the catwalk.

Make that a long, winding, snake-like all-black catwalk decorated with a few trees that extended from the main stage at one end of the arena all the way to the back of the floor at the other end.

It was where Timberlake, his six dancers and massive Tennessee Kids band spent the majority of their time over the course of a slick, dance-happy, two-hour show, much to the delight of the people on the floor.

For those of us in the stands, it also made the cavernous ACC seem more intimate.

Sadly, given all that time spent there, it was dark and dimly lit, but Timberlake mostly made up for that with gorgeous visuals projected on scrims that descended from above him all night long onto which woods, a starry sky with a crescent moon, and the handsome, charismatic singer himself were seen in all their glory.

Timberlake seemed particularly stoked to be launching his latest trek in «The 6ix» or «The North» as he alternately called Toronto to big cheers, while handing out shots on a tray to his crew on the catwalk mid-show to celebrate opening night.

«Here’s to mf Drake!» he added during his toast, to even more screams from the crowd.

«We are thrilled to be here with the first night of our Man of the Woods tour!»

Opening the evening with the new song Filthy, Timberlake stood out best when he delved further back in his catalogue that now covers five solo albums starting with SexyBack and continuing with Senorita, Suit & Tie, Cry Me A River (with those scrims lighting up with beautiful, flowing light effects), Mirrors and Drink You Away.

Then it was time to slow things down a bit and literally sing around the campfire at the back of the catwalk.

I enjoyed his generosity and then it was time to break out the dance moves again for What Goes Around … Comes Around, highlight the two best new songs Say Something and Montana, and end the show with such older crowd-pleasers as Rock Your Body and Can’t Stop The Feeling!

Timberlake returns for a second night at the ACC on Thursday night and has added a third show on Oct. 9.

The Star — Launch of superstar’s Man of the Woods tour delivers extravagance and flawless performance — and Toronto’s own Francesco Yates fared well as the opener.

Even with some of the most elaborate, sophisticated visual technology available at his disposal, pop superstar Justin Timberlake managed to have his campfire moment at the Air Canada Centre Tuesday night.

With a literal campfire.

About 72 minutes into the North American kickoff of his Man of the Woods tour, the Memphis native gathered on a stage with a few supporting vocalists of his Tennessee Kids entourage around burning flames, pulled out the acoustic guitar and allowed them to shine individually with their own interpretations of hits like Fleetwood Mac’s «Dreams», Lauryn Hill’s «Ex-Factor», The Beatles’ «Come Together» and John Denver’s «Thank God, I’m A Country Boy».

It was a dramatic, calming departure from what had been, up to that point, a very intricate, highly choreographed and rigidly disciplined demonstration of what has made Timberlake fans fall in love with him in the first place: his expressively elastic tenor with its soaring falsetto; neo-soul love songs of various tempos; spiced up semi-robotic, Michael Jackson-inspired footwork delivered by the singer and songwriter and his dancing sextet; and instrumental backing by 15 musicians, ranging from a tuba player/trombonist to a couple of keyboardists and a pair of drummers.

In fact, the sheer extravagance of the spectacle was in itself something to behold: an arena-length, winding catwalk featuring five performance areas — anchored at the centre by a circular bar — allowed practically every one of the estimated 18,000 spectators in attendance to spend some quality visual time with Timberlake at some point during his thoughtfully planned two-hour show.

And anyone who didn’t get a close-up was visually compensated by a complex system of thinly membraned screens that hovered above the venue floor, furling and unfurling to adjust to whatever graphic Timberlake had planned for the moment. The catwalk was also decorated with trees and one stage was occasionally covered with holographic grass, mimicking the appearance of a forest.

Of course, none of this would matter if it wasn’t for the music, and in this aspect, Timberlake delivered his performance flawlessly: aside from offering generous portions of his new Man Of The Woods — a not-so-veiled reference to his son Silas and the entertainer’s entrance into parenthood — he also delivered the hits that everyone wanted to hear and got into them fairly early.

«LoveStoned» was the third song in and Justin got his «SexyBack» by the fourth number; the crowd responded by dancing in exhilaration to the funky beat and participating in full-throated sing-along, later aping the call-and-response stanzas of the light-hearted «Senorita» from Justified and enjoying the jubilant «Rock Your Body» near the end of the show.

For his part, Timberlake seemed pleased with how show No. 1 went, stopping at one point to grab some shots for his band at the bar to salute «the wonderful city I always have a blast in» as well as offering a shout-out to Drake (who may or may not have been in the house).

For the record, Justin Timberlake hit it out of the park — his most well-rounded production yet.

The only drawback, from my seat in the stands, was that the sound was intermittently distorted due to the spectacle’s sheer volume during the faster numbers. So, if the ex-NSYNCer was aiming for any nuances at those moments, they were lost in the building’s acoustics. It’s probably something that will improve as the show continues, which it will do so in Toronto on Thursday and when it returns to the same venue on October 9.

While Timberlake is a veteran performer by many standards, Scarborough’s Francesco Yates is still very much at the beginning of his career at 22. Yet as J.T’.s opening act, Yates served notice with his own animated, choreographing-heavy performance that he intends to enter the same lofty stratosphere occupied by Timberlake, Bruno Mars and Prince if given the chance.

Yates delivered some great singing, searing guitar work and a bevy of dance moves that had the crowd screaming for more.

Maybe this man of the woods was just distilling moonshine in the wilderness. At the opening stop of his Man of the Woods Tour in Toronto on Wednesday, Justin Timberlake distributed shots to his band and some lucky fans near the stage.

«Sorry we had to do this — this is our first night», Timberlake told the audience as he served up the booze. «Here’s to the wonderful city I always have a blast in».

The celebration capped off an eventful night for Timberlake, who performed 26 tracks in a career-spanning set. «There’s nothing better than watching your man do what they’ve been put on this earth to do», his wife Jessica Biel tweeted. «I’m so proud of you, man of the woods!»

There's nothing better than watching your man do what they've been put on this earth to do. I’m so proud of you, man of the woods! #MOTWTOUR pic.twitter.com/QFSkvmpwdR

With North American and European dates that stretch into January 2019, Timberlake’s tour extends his re-emergence in the music sphere. In February, he released his fifth studio LP and headlined the Super Bowl halftime show. For more, revisit EW’s inside look at the making of Man of the Woods.
Entertainment Weekly —