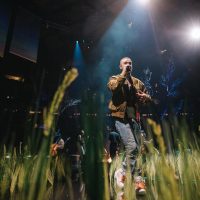 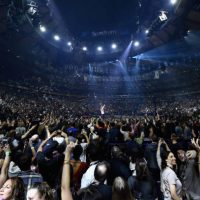 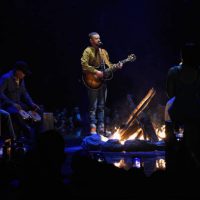 North Jersey — Justin Timberlake is a Tennessee native, as he noted from the stage at Madison Square Garden on Thursday night. The concert was part of his Man of the Woods Tour — named after his latest album, which features a duet with the country star Chris Stapleton, and a song called «Flannel». He wore a flannel shirt for part of the show, and sometimes played an acoustic guitar. He adorned the set with six trees and tall grass and, in one segment, gathered with his bandmates, around a campfire, for a mini-set of cover songs, including the John Denver hit «Thank God I’m a Country Boy».

Rest assured, longtime Timberlake fans. Despite all these trappings, this was not a full-blown country show. In fact, on a purely musical level, there was virtually no country music in it at all.

Timberlake’s Man of the Woods Tour is more Hollywood than backwoods: a high-tech, high-energy romp through his hits, with half of the pop-friendly material from the new album mixed in. Even the campfire segment, featuring songs like Fleetwood Mac’s «Dreams» and the Beatles’ «Come Together», felt more like something concocted for a Las Vegas lounge show than something that came together organically in a rural setting. Only a snippet of «Thank God I’m a Country Boy» was performed, and it had a gospel flavor.

Thursday’s show was supposed to be the second of two at the Garden, but Wednesday’s stand-opener was postponed to Oct. 22 because of snow. Timberlake will also perform at the Prudential Center in Newark this Sunday, and have a third show at the Garden on Oct. 24.

Timberlake would seem to have something to prove on the tour, which began March 13 in Toronto. His Super Bowl performance in early February generated mostly lukewarm responses, and reviews of «Man of the Woods» were generally mixed or negative. The album has had three singles so far («Filthy», «Supplies» and the Stapleton duet, «Say Something»), and none has come close to having the impact of his 2016 smash, «Can’t Stop the Feeling!»

At age 37, and more than two decades after releasing his first album with N’ Sync, has Timberlake finally run out of steam?

It certainly didn’t seem that way at the Garden, though, as he sang hit after hit («SexyBack», «Cry Me a River», «What Goes Around … Comes Around», show-closing «Can’t Stop the Feeling!» and so on), executed dazzling, complex dance moves with seemingly no effort, and basked in his fans’ adoration. He may not be moving forward musically the way you would like a major artist to, but he left no doubt that he can still entertain with the best of them.

This was a very busy show, with screens moving up and down throughout the arena, and constant movement back and forth from the main stage to three smaller ones that were connected to it by ramps. Timberlake sang a slow but swinging version of «New York, New York», in tribute to the setting, and, taking advantage of the large circular bar in the VIP section at the center of the arena, danced on it, and got a tray of shots to hand out to his bandmates.

Speaking of which: I’ve never seen a closed-off VIP area, with its own bar (and a mini-stage in the middle of it), taking up a large portion of the arena floor, as it did at this show. And I felt funny about it. A concert is, in one sense, a communal experience, creating a feeling that we’re all here together, having more or less the same experience, enjoying this music. Having the VIP section so centrally located — and you couldn’t exactly ignore it, since Timberlake performed some of the show from that mini-stage –underscored the point that the concert business these days is built around offering different experiences to different people, depending on how much you’re able to pay.

NOTE: The Oct. 22 show is the makeup date for the postponed March 21 show.