The Man Of The Woods Tour, Cleveland, OH, EE.UU. +58 imágenes 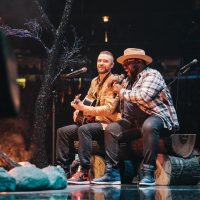 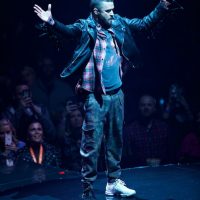 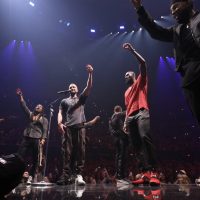 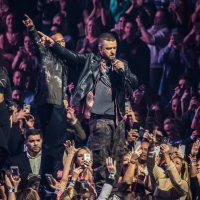 Justin Timberlake gets lost in the woods in Cleveland concert

Cleveland.com — Equipped with plenty of camouflage clothes, tree-shaped stage designs and even a real-life campfire, Justin Timberlake channeled his outdoorsy side in Cleveland’s Quicken Loans Arena on Saturday night.

The concert was a stop on his world tour in support of his newest album «Man Of The Woods», released in February. The album incorporates country and folk influences, blending them with Timberlake’s natural knack for R&B and soul pop.

Yet, it’s easy to get lost in the woods.

«Man Of The Woods» is a tough album to place. It’s not bad–but there are some questionable songs. (Like the cheesy, acoustic «Flannel».)

Still, despite some of the album’s low points, Timberlake has received praise for changing up his approach to pop music in a genre so dominated by cookie-cutter singles.

The same can be said for his live show. With a winding, snake-shaped stage that spread across the entire floor of the arena, Timberlake was able to at times make his concert feel small and intimate, and other times larger-than-life with blasts of lasers and towering screens.

He earned a ton of audience applause when he welcomed Cavs superstar LeBron James onstage to take a shot of liquor with him and to talk about the two celebrities’ longtime friendship.

Nature was a strong theme of the night. Green grass shot up from the stage’s border during Timberlake’s performance of «Man Of The Woods». Later, as he sang «Cry Me A River», the winding stage was covered in a layer of fog with projections of raindrops showering down to the floor.

This opposed sharply with other hits by Timberlake, like the electronic, suave «Suit & Tie» and his energetic, sunshiney hit song «Can’t Stop The Feeling».

At times these two energies–rustic and futuristic–felt as disjointed as the «Man Of The Woods» album track list.

Still, if you weren’t a big fan of the new direction, you could still have fun at Timberlake’s concert. He ran through all of his hits like «SexyBack», «Mirrors» and «Rock Your Body», showing off sexy dance moves and plenty of crotch-grabs.

It was impressive how one man–even a man as prolific as Timberlake–could command the entire Quicken Loans Arena stage.

It turns out it was so impressive that Timberlake will return in October for another «Man Of The Woods» tour stop in Cleveland. His recent stop sold out so quickly that the popstar added a second date for Oct. 2.

Justin Timberlake Delivers a Physically Demanding Set at the Q

Scene — Last night at the end of «Cry Me A River», Justin Timberlake sat down on the circular stage in the middle of the arena and took a little breather. It was part dramatic gesture — the Quicken Loans Arena crowd, of course, went wild with cheers and applause — and part functional: Timberlake’s Man of the Woods tour is a physically demanding two-hour concert that packs in every high point from his solo career.

You can see a slideshow of photos from the show here.

By and large, this marathon succeeded in cementing once again that his place in pop’s upper echelon is secure. The thoroughly entertaining, well-paced show overflowed with gravity-defying liquid dance moves, impressive stage effects and even a surprise appearance from LeBron James, who brought out a tray of shots for Timberlake and his band, the Tennessee Kids.

LeBron’s appearance of course created plenty of goodwill. However, the eclectic music on display—which pleased the many, many audience members primed for a Saturday night out dancing and drinking—was the true star. Throughout the night, Timberlake and crew touched on old-school hip-hop («Summer Love»), ’90s R&B (the swerving seduction «Suit & Tie»), sultry funk (the horn-peppered «Midnight Summer Jam») and blazing rock ‘n’ roll (the distortion-spackled «SexyBack»).

Standouts included «Drink You Away» — a cathartic and soulful moment that featured Timberlake and the Tennessee Kids bunched up on the mid-arena circular stage jamming — a towering, sincere version of «Mirrors» and gospel-tinted «Say Something». Effects-wise, the show was also impressive. Timberlake was shrouded in lasers during a «Suit & Tie» interlude that found him wielding a mic stand like a light saber and showing off robotic dance moves. On «Rock Your Body», he joined his dancers to bust some moves on a light-up dance floor, and during «Cry Me A River», he frolicked through plumes of frothy smoke.

Despite the vast scope of the arena, the tour configuration fostered intimacy. The stage itself had a path that cut through the floor, which meant Timberlake was frequently performing to people seated in the back and sides of the arena. Futuristic, retractable translucent video panels located at the ends and middle of the arena also beamed interstitial clips and live footage, creating an immersive experience.

On a micro level, the stage props also nodded to the rustic vibe of Timberlake’s latest album, Man of the Woods. Fake trees dotted the paths, while a floor VIP section was separated from the crowd by a railing made of fake wood. During the show, the video panels beamed tranquil scenes depicting gorgeous nature or wildlife. Although these flourishes could’ve easily been cheesy, the rustic nods were tasteful—save for a thicket of fake grass that inexplicably sprouted on an auxiliary stage and a relationship-geared video interlude that felt more like an eHarmony commercial.

Timberlake himself kept things low-key as well. He wore sneakers for much of the set, and also sported a simple Jimi Hendrix T-shirt, often under a flannel. Later in the set, he channeled another Justin Timberlake—that would be James Taylor—by strapping on an acoustic guitar and gathering the band around a very realistic campfire facsimile for a few stripped-down songs. Although the premise was somewhat hokey (Timberlake tied the section in with the concept of storytelling, which felt slightly shoehorned in), the execution was flawless.

More specifically, this set was a vocalist showcase. «Flannel» boasted a cappella harmonies, which exuded an ’90s R&B vibe. Shortly thereafter, Timberlake ceded the mic to members of his band to take lead vocals of covers of Fleetwood Mac’s «Dreams», Lauryn Hill’s «Ex-Factor», the Beatles’ «Come Together» and John Denver’s «Thank God I’m a Country Boy». While obviously a way for everyone to take a break, the interlude was a smart way to ease into the latter half of the show.

As this section implied, the camaraderie between Timberlake and his musicians was particularly wonderful to see. Unlike many other pop-leaning arena shows, the band didn’t stay shrouded in the shadows and wasn’t trotted out as a performance prop: They were an integral part of the concert, between their own grooving gestures while playing, to the fact they followed Timberlake as he traipsed from the main large stage to smaller stages. Their presence also enhanced familiar tunes: «My Love» and «SexyBack» featured squealing guitar solos at the end, while «Señorita» boasted blasts of horns and percussion.

Timberlake himself also couldn’t resist showing off his musical acumen. At the start of the standout «My Love», he pecked out the song’s electronic squiggles on a sampler; for «Señorita», he hopped on a keyboard. In an even better move, he performed «What Goes Around…Comes Around» on an acoustic guitar—an inspired choice, as the bitter kiss-off worked as an acoustic torch song, and the arrangement allowed him the time and space to unleash an agonized falsetto.

The end of the show felt a little rushed, courtesy of truncated versions of «Rock Your Body», «Supplies» and «Like I Love You». And the finale of «Can’t Stop the Feeling!» felt a little flat: Instead of a straightforward performance from Timberlake and crew, it turned into more of an extended dance party for everyone onstage and in the crowd, thanks to its sporadic vocals and an abundance of groove. No doubt these kinks will be worked out when Timberlake brings the Man of the Woods tour back to the Q for an encore presentation on on Oct. 2.

The Shadowboxers had the unenviable task of opening the show and did an admirable job holding their own during a half-hour set. Performing with three instrumentalists, the Atlanta trio exhibited some boy band-esque choreography and an engaging mix of soul/pop/funk highlighted by the retro throwback «Shadowboxer» and a cover of Michael Jackson’s «Remember the Time». Let’s hope the Shadowboxers return for a club show, as a more intimate setting would be a better showcase for their tunes.