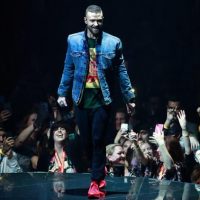 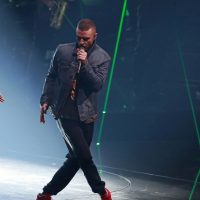 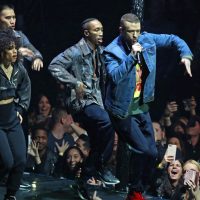 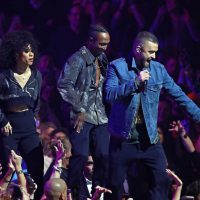 Justin Timberlake journeys into ‘The Woods’ at the United Center

Chicago Sun-Times — While his highly touted return appearance at this year’s Super Bowl half-time show served up little in the way of excitement, Justin Timberlake pulled out all the stops in an incredibly sensory new tour that arrived at the United Center Tuesday night. It proved an ambitious feat in scope, size and style.

Much of the show (which repeats Wednesday night at the venue) dallied between hits from his massive 2006 album «FutureSex/LoveSounds» and his newest release «Man Of The Woods» without flinching, even though more than a decade separates the two very different works. Hits «SexyBack» and «Summer Love», paired with laser lights and a giant rotunda of video screens, brought a sweaty club vibe into the massive arena, with Timberlake and his crew of dancers even jumping from the stage at one point onto a neon dance floor in the midst of the crowd. But new favorites like «Flannel» and «Montana» tempered that carefree feel with the exploration of a more grown-up, risk-taking artist.

Timberlake famously started his career as a child actor, singer and dancer, and though he stayed close to his pop roots while in the ’90s boy band NSYNC and even his earliest solo albums, «Man Of The Woods» explores his autobiographical roots, growing up in a simpler life near the music meccas of Memphis and Nashville, Tennessee. The familiar sounds of those cities were reflected on songs like the jazzy funk of «Midnight Summer Jam», the bluesy R&B of «Higher Higher» and the rustic Americana of the title track, all expertly interpreted by a solid lineup of 12 backing musicians, called the Tennessee Kids. The crew includes a new inductee from Chicago who recently joined the tour and was celebrated on this night with a round of shots from the bar conveniently abutting the thrust stage.

The unique stage setup — a long winding pathway that spanned the width of the arena’s floorspace — clearly had fan interaction in mind, with multiple opportunities for high-fives and selfie-stealing moments, which have become Timberlake’s signature crowd-pleaser. Dotted with fake trees and prop grass, it was a fantastical interpretation of «The Woods» that
achieved the singer’s mission of bringing the outdoors inside.

The evening’s midpoint was a definite high point, complete with a staged campfire and acoustic sing-a-long that included covers of Fleetwood Mac’s «Dreams», The Beatles’ «Come Together» and John Denver’s «Thank God I’m a Country Boy» before culminating in a hauntingly beautiful serenade of «What Goes Around… Comes Around» that bled into «Say Something», Timberlake’s recent collaboration with country star Chris Stapleton.

If this is what being lost in the woods sounds and looks like, we can only hope Timberlake stays there a while.

Orlando Sentinel — Forget about being a self-proclaimed «man of the woods». Justin Timberlake emerged as a man for all seasons Tuesday at the first show of a two-night stand at United Center.

Taking advantage of a sprawling stage that snaked end-to-end via a winding pathway connected to two satellite platforms, the 37-year-old refused to stay in one mode for long. Parade leader. Spurned lover. Assertive dancer. Down-on-his-knees relationship savior. Bartender who handed shots out to his large ensemble. Outdoors lover who gathered around a campfire to play familiar songs. Timberlake embraced an array of roles, blurring the lines between entertainer, singer and actor.

Fittingly, the surroundings often resembled film sets — complete with mobile visual screens, cutting-edge laser lights, fake trees, rotating bandstands and an illuminated dance floor straight out of «Saturday Night Fever». The milieu didn’t always jibe with projected images of forests and mountains, which also made for strange bedfellows with the nightclub flash of material such as «Midnight Summer Jam» and «Montana».

No matter. Timberlake, not two months removed from a shaky Super Bowl performance and in the midst of attempting to reclaim a paramount spot in a pop world that favors youth, seemed determined to convince the packed audience that rusticism and electro-spiked grooves could coexist. Despite a few hiccups, he primarily succeeded during the breathlessly paced first half of the two-hour show. The vocalist had help in the form of a 15-piece band eager to get down and a dance troupe schooled in fluid choreography.

Even as Timberlake’s shouted, James Brown-inspired instructions to his group came off as affectation rather than impulsive commands, there was no denying the brass-punctuated pulse driving «LoveStoned» or wah-wah strut pushing «Higher Higher». Timberlake and company built «SexyBack» into a seamless hybrid of hard rock and suggestive R&B, and fused Latin accents and call-and-response choruses to turn «Senorita» into a rhythm machine. The group’s momentum carried over to a devotional, if bombastic, «Mirrors», sent up with the kind of triumphant crescendos designed to signal a costume change.

Absent fleet footwork, sleek breakdowns or edgy funk, Timberlake’s later turns as an acoustic-guitar-strumming troubadour failed to connect. In the same manner the lament «Drink You Away» lacked any hint of heartbreak, the sight of the musicians sitting beside an old-fashioned campfire felt forced and overdone — not to mention ironic, given the arena’s air-conditioned confines. Mercifully, backup-singer-led covers of tunes by the likes of Fleetwood Mac and Lauryn Hill remained brief.

Save for the country-laced ballad «Flannel» (which, yes, Timberlake crooned while wearing a plaid flannel shirt), the ill-fitting roots diversions stood as poor trade-offs for truncated renditions of «What Goes Around…/…Comes Around» and «Rock Your Body». For a singer who displayed pride belting out the disco-etched «Can’t Stop the Feeling!» and understood the eternal appeal of its carefree message, losing sight of slinky beats and fun-loving sounds proved out of character — no matter the frontier heritage implied by his last name.

Timberlake was definitely in the house and delivering all the kinetic manuevers and vocal dexterity he’s known for as he performed the first of two packed shows in Chicago. Another show was scheduled for March 28.

The singer, who first catapulted to fame as a member of NSync, is currently on The Man in the Woods tour, in support of his latest album of the same name.

Timberlake’s show proved an energetic dance party for not only the singer but his avid fans who remained up out of their seats and moving throughout the entire two-hour plus show.

Tunes from «The Man in the Woods» album were showcased as well as songs from previous hit albums «The 20/20 Experience» Albums 1 and 2, «FutureSex/LoveSounds» and «Justified».

Timberlake’s concert, which started at 9 p.m., began with the latest hit «Filthy» from the new album. He launched into the club favorite «SexyBack» early on and kept the high energy going throughout the show.

It’s always a given that Timberlake’s shows will be filled with polished choreography and such was the case with this concert. Timberlake and his accompanying dancers were forever in motion as they traveled across the length of the United Center. The theatrical setting featured assorted stages and a walkway set up in the middle of the venue with audience members standing around them.

Video screens, which were situated in three places in the United Center, flashed larger than life images of Timberlake and his crew and also featured pictures of nature, including the woods, mountains and the elements. A campfire also was set up in the middle of one of the stages at one point as Timberlake played the guitar and his dancers sat around the fire.

The singer’s band, The Tennessee Kids, proved a group with non-stop energy.

Timberlake’s set-list starred a good amount of fan favorites including the Latin-tinged «Senorita», «My Love», a shortened rendition of «Rock Your Body», «Summer Love, «Drink You Away«, «Cry Me A River«, «Suit and Tie«, «Mirrors», and more.

The singer’s concert had no slow or mundane moments. Timberlake proved he’s still at the top of his game with this tour.