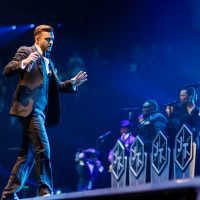 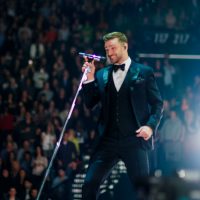 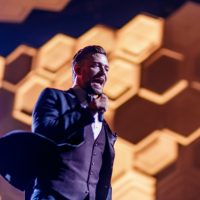 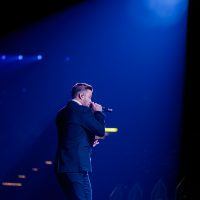 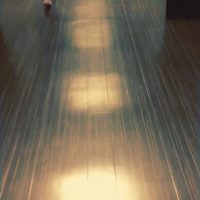 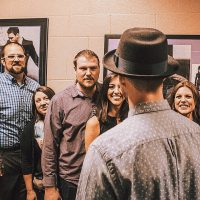 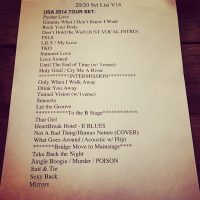 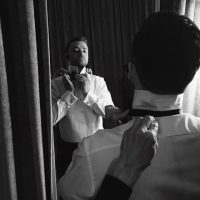 Las Vegas Sun — «It’s 2015! Did you come to have a good time tonight?» superstar singer-songwriter Justin Timberlake asked at MGM Grand Garden Arena on New Year’s Day during his «The 20/20 Experience Tour» stop, which was an embarrassment of riches this particular Thursday night.

It was Timberlake’s fifth of six dates at the Strip venue in the same tour, and it was my third time at the J.Timberlake show in the same tour (the first performance was the Concert of the Year for 2013, and the second was easily in the Top Five for 2014).

Talk about something to be thankful for as 2014 ended and 2015 began, both for the Grammy Award-winning artist and this longtime journalist (and, full disclosure, avid fan).

Concert No. 3 mirrored — «Mirrors», ha! — No. 2 almost exactly setlist-wise save for the addition of «That Girl» on New Year’s Day. Timberlake wore a white tuxedo jacket during Concert No. 1, was Mr. Casual in a black jacket over a black T-shirt in Concert No. 2 and was 007 suave in a black tuxedo in Concert No. 3.

On this night, and the final night, Oscar-winning director Jonathan Demme («The Silence of the Lambs») recorded «The 20/20 Experience» for a future (concert DVD?) project. So every song, nearly 30(!) of them, was ramped up — as a showstopper and/or a finale — for the cameras. It was exceptional — but bordering on overkill, perhaps too much stimulation.

Other than the wardrobe and hyped-up delivery, Concerts No. 2 and No. 3 were Wonder Twins. Timberlake’s talent and charisma are undeniable and limitless. His dancing, even 2 1/2 hours into a 3-hour show, is astounding.

There was certainly backup tracking, and understandably so, but when he sang, and it was during most of the concert, his voice, and especially his falsetto, soared. And he’s never looked better in a tuxedo, except maybe on Oscar night.

Other highlights and notes: Timberlake took off his tuxedo jacket before «Love Stoned». Before «Until the End of Time» seated at a white piano, he suggested, «Let’s light up MGM Grand tonight». He acknowledged the diverse crowd, from Dubai to Brazil to Boston. Of Boston, he quipped, «You’ve traveled from the cold to the … cold».

A few quibbles: The music and production — including a very heavy bass that literally shook the rafters of MGM Grand Garden Arena — often and unfortunately drowned out Timberlake’s voice. It was especially noticeable during «Holy Grail». The bells and whistles are incredible, but a true talent like Timberlake doesn’t need all of them, especially if they push him to the side.

Then «Only When I Walk Away», «Drink You Away» (a toned-down, country-fied song with his band J.T. and The Tennessee Kids — Timberlake is from Memphis), «Tunnel Vision», «Senorita», «Let the Groove Get In» (a Latin number with a little «Conga» by Gloria Estefan and Miami Sound Machine), Elvis Presley’s «Heartbreak Hotel», Timberlake’s current hit «Not a Bad Thing» and Michael Jackson’s «Human Nature».

And «What Goes Around … Comes Around», «Take Back the Night» (with «the roof is on fire» chant and a mashup with Kool & The Gang’s «Jungle Boogie»), «Murder», Bell Biv DeVoe’s «Poison» with the awesome signature dance moves, «Suit and Tie» and, for the encore, «Sexy Back» and «Mirrors».

Let’s hope that the incredibly talented Mr. Timberlake will be front and center on his next tour, but this indelible «20/20 Experience» was nonetheless completely satisfying. Timberlake is on top when it comes to talent, moves and looks. Or, as he said during «Sexy Back»: «I still run this bitch».

Vegas Seven — Justin Timberlake is a damn good entertainer. His 20/20 Experience World Tour has been so popular that it’s lasted nearly two years, making six stops in Las Vegas alone. The Experience was already in fine form when I saw it in November 2013, but knowing that the final two shows would be filmed (and directed by Hollywood’s beloved Jonathan Demme), I wondered how it might change. Would there be over-the-top visuals? Celebrity guest appearances? Nope and nope, because JT doesn’t need that.

The 33-year-old showbiz veteran delivered a mesmerizing and polished pop performance. He moved seamlessly through his catalog of hits, acting as leader of his suave ensemble band, the Tennessee Kids. His vocals evoked the gamut of emotion, producing a sexy growl on «Rock Your Body», sweet falsetto on a slowed-down «My Love», and authoritative confidence on «Cry Me a River». You could just picture Britney Spears weeping in the background.

All the while, Timberlake slayed his choreography, executing alluring hip shakes, body rolls and floor glides without a hitch. He was smooth, but never stale. He sprinkled in the lyrics of Nirvana’s «Smells Like Teen Spirit» and Jay Z’s «Tom Ford» to give his own songs new life. He ad-libbed expletive-laced greetings («Vegas, shake yo’ ass!») in between serenades, commanding the audience with intoxicating swagger and charm.

As overheard by one white-haired woman leaving the arena, «It was a great show, even though I didn’t know any of the songs». That’s how remarkable and well-rounded Timberlake is. The master showman kept us on our toes and our feet for almost two and a half hours. Let’s just hope someone recorded it all …★★★★★

Boxford woman wins trip to Las Vegas to meet Justin Timberlake
Wicked Local — «My sister and I started 2015 with a bang!» said Kim Bitto of Boxford week who met superstar Justin Timberlake in Las Vegas after winning a contest in November called #Finderskeepers.

Bitto, a huge Timberlake fan, explained that «JT’s team» placed autographed albums at 10 locations across the country including one in Boston near her office.
After receiving a phone clue notification that showed a picture of the George Washington Statue in the Public Garden, Bitto ran from her office to find the hidden album. She was the first one to arrive at the famous statue and claimed the album just seconds before several others showed up.

«I thought I was only winning an autographed album, but come to find out, I actually won a trip to Las Vegas to see Justin Timberlake’s last concert of the 20/20 tour», said Bitto who reported that her prize was not only the autographed album, but also a round trip airfare for two to Las Vegas, a one night’s stay at the MGM Grand, a $500 Master Card, a «swag bag» full of goodies, VIP concert tickets and a meet and greet with Justin Timberlake before the concert, which all took place on Jan. 2.

«The funniest part», recalled Bitto, «Is that I posted my bucket list on Facebook just two days earlier with a wish to meet Justin Timberlake and to have a picture taken with him. It was pretty incredible».

«He was so quiet and calm and low-key when he talked to us. I thought I was going to pass out. He was so normal», Bitto recalled about her one-on-one with Timberlake.

«It was quite an amazing night! I even met Amy Adams in line for the ladies room!» said Bitto who added, «It certainly was a GREAT way to start 2015!».

Bitto recalled that the winners and their guests were lined up in the Hallway and that Timberlake then came out to greet them individually.

«He joked that ‘Boston’s in the house’ and then talked to all of us as a group before we had pictures taken with him. My sister asked that he do a silly picture too. It was all videotaped since it was the last concert stop on the tour», she said.

Bitto admitted that she has gone to seven Justin Timberlake concerts including one in 2007 at the Garden on her birthday and another show that he performed with JZ at Fenway Park.

Bitto’s daughters Kaylie, 13, and Samantha, 16, were very jealous, said Bitto, but you had to be 21 years old to get the tickets to the VIP Tequila Lounge, which is where the winners watched the show in a standing room dance party area, toward the back of the stadium. «His whole stage (band and dancers included) moved, traveling all the way down to the back of the stadium where we were», Bitto said.

«We were on Cloud 9. It was like a dream …while it was happening it did not seem real, but the pictures we brought back made it seem real. My sister and I are still reliving every minute we can through texting and Facebook», Bitto added.

«I’ll never forget this as long as I live. First time I’ve ever won anything like that. He’s the only one I ‘stalk’, as my family calls it», joked Bitto who is also a big fan of Neil Diamond. «I cover both ends of the spectrum», she chuckled.