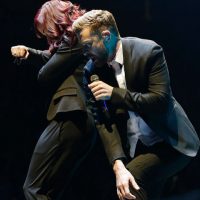 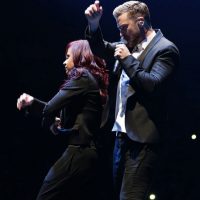 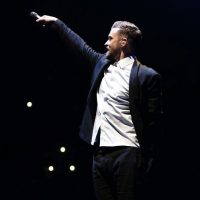 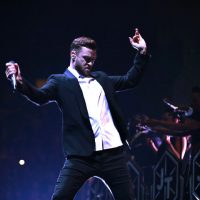 JUSTIN TIMBERLAKE at the Air Canada Centre, rating: NNN
Now Toronto — Justin Timberlake returned to pop music last year with the two-part album The 20/20 Experience, a forgettable effort full of warmed-over lite-disco-funk and cornball come-ons. Its songs fare better when the 33-year-old is swivelling his pelvis in person.

Casting himself as a kind of nightclub orchestra leader, Timberlake and his band, which included two drummers and a horn section, played a high-energy set that emphasized musical versatility without totally abandoning the ravey laser lights, backup dancers and cutting-edge technology you’d expect from a pop star self-styled as Michael Jackson’s heir apparent.

The set list drew from his four albums plus stripped-down renditions of Elvis Presley and Jackson hits. The Suit & Tie singer is charisma incarnate, moving with smoothness and ease. The band, meanwhile, has clearly been at it for a while, switching up arrangements mid-song. My Love went from slinky electro-funk to twinkling piano ballad to Santana-style rock soloing, but such flourishes were overwhelming and unnecessary.

Timberlake seems caught in a transitional phase between pop star and Serious Band Leader with Prince-style funk revue leanings, but his material lacks the gravitas needed for such treatment. Fortunately, he still has pop star charm.

And managed to make commitment pretty exciting too.

Justin Timberlake, who first arrived with his 20/20 Experience tour at the Air Canada Centre for a pair of shows around Valentine’s Day of this year, returned for a third visit to the venue on Wednesday night.

But this time was extra special for one Toronto couple mid-show as the man decided to propose to the woman who sat in the first row and said yes before they shared a kiss.

«You’ve been engaged for a half-hour – how’s it going?» joked Timberlake to the couple he later spotted when an elevated and moving stage brought him and some of his band and dancers to the back of the arena during Let The Groove Get In in one of the show’s most thrilling moments.

Bells and whistles aside – there was also an impressive white honeycombed video screen behind Timberlake on the main stage and a series of ramps to take him closer to the audience – the music and film star seemed a much tighter performer on his return trip to T.O. having been performing virtually the same set list for months previously with a few minor adjustments.

«How you feeling in Toronto tonight?» said the singer after opening the evening with Pusher Love Girl in silhouette before he and his large 16-piece band were slowy revealed along with six dancers who later joined him to bust some major moves on songs like Rock Your Body and Like I Love You.

All of this saucy dancing made me wonder who would win in a dance off? JT or Channing Tatum? (Sometimes the mind wanders.)

Still, Timberlake also proved capable on piano (Until the End of Time in the first set) along with organ and acoustic guitar as the show progressed.

«I love you guys», said Timberlake, pausing early in the show to bow down to the crowd a la Wayne’s World’s «I’m not worthy» move.

Cool looking visuals on the large screen bolstered LoveStoned as the first set ended with the double highlights of Holy Grail (from his collaboration with JayZ) and oldie but goodie Cry Me A River.

A ten minute intermission followed (to allow Timberlake to change from one cool looking black and outfit into another) and the second set wowed even further with Timberlake on acoustic guitar for Drink You Away.

«I’m from Tennesse, we like to drink there», he said.

Turns out a lot of his female fans did too judging from the well-lubricated line of soccer moms in the row in front of me, double-fisting white white and videotaping the proceedings simultaneously.

He played organ for another song highlight Senorita but then that moving stage moment kicked in and the bar was raised (literally) as Timberlake got a shot of booze from someone in the crowd and toasted the country in general: «Canada we love you!»

From there he strapped on an acoustic guitar for Heartbreak Hotel – «Let’s hear it for Elvis Presley – the King of Rock n’ Roll!» the mid-tempo ballad Not A Bad Thing, a cover of Michael Jackson’s Human Nature, and the old chesnut What Goes Around … Comes Around.

Take Back The Night heralded the moving stage taking Timberlake and company back to the main stage where they kicked it old school on Kool & The Gang’s Jungle Boogie and Bell Biv DeVoe’s Poison with dance moves to match.

There was no choice then but for the evening to end with his big solo hit, Suit & Tie, before a satisfying encore of two more audience pleasers: SexyBack and Mirrors.

Until the End of Time

Cry Me a River

Only When I Walk Away

Let the Groove Get In

Not a Bad Thing

What Goes Around… Comes Around

Take Back the Night