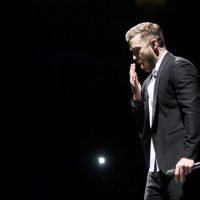 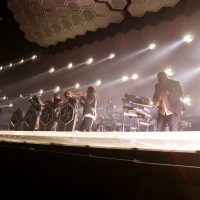 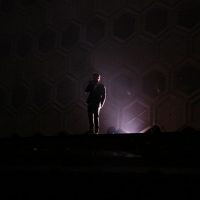 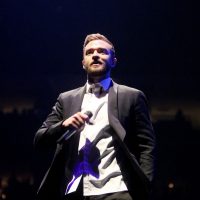 His black suit jacket and dress pants — crisp, tailored and confident — were akin to the commanding persona that took the Wells Fargo Center stage Wednesday night.

But accompanying the singer’s fanciful flourishes were details that screamed of traditional pop star swagger. Timberlake’s button-down shirt under his blazer was left untucked, surely for mobility’s sake. And instead of stiff dress shoes, he wore sneakers. Because the 33-year-old hit-maker from Memphis does not stand still on stage for very long before he jumps, spins or slides.

Timberlake’s 20/20 Experience World Tour delivered a devoted Philadelphia crowd two and a half hours of impassioned tunes — mostly new, from his eponymous 2013 double album with some old favorites mixed in. Seamless bouts of energy and poise from the singer, mixed with a huge supporting band and unique production left the audience unprepared to leave as the last notes of «Mirrors» left the arena.

HIGHLIGHTS
• For all intents and purposes, this is solely Timberlake’s tour, but the trip’s gimmick has been that the singer is leading «JT and the Tennessee Kids», a group of 20 musicians and dancers who join Timberlake on stage for most of his set. Between the magnetic frontman and his wall-of-sound backers, each arrangement was consistently electric. The 20/20 songs, which were written for and require such a big band, were spot on, but it was compelling to hear altered arrangements of the older, more synth-heavy hits like «Rock Your Body» and «SexyBack».

• As he first took the stage, slowly rising from beneath the platform like lazy Toaster Strudel, Timberlake turned his back to the crowd, peeked over his shoulder and gave a little smile. The swoons nearly turned the air a new color. The audience was putty from there on out, and a few songs later, a woman threw her underwear on stage. «I’ll hang it on my Christmas Tree», Timberlake said.

• Between the intricate choreography of «TKO» and «My Love», Timberlake showed off some musicianship. He sat at a grand piano for «Until the End of Time» and picked up an acoustic guitar for his boozy-bluesy «Drink You Away».

• As Timberlake and his band set off on the pulsing «Let The Groove Get In», the front slice of the stage on which they were standing began to rise. After reaching about 15 feet, the structure slid forward, over the floor crowd and slowly toward the back of the arena.

Fans who at first didn’t have the best view of the mainstage were now seeing Timberlake delivered to them. The apparatus eventually reached the back of the venue and JT climbed down to perform his hits «Not A Bad Thing» and «What Goes Around» on a smaller second stage. Impressive production for sure.

• Timberlake throughout the night covered songs by Elvis Presley, Michael Jackson, Kool and the Gang and Bel Biv DeVoe. Talk about paying tribute to your muses. If those four acts were dropped into a boiling cauldron and stirred around, someone like Timberlake would form in the vapors.

This show was No. 129 in 134 stops on the eight-leg mammoth tour Jan. 2 in Las Vegas, 14 months after it kicked off in Brooklyn. The roadtrip has raked in more than $200 million dollars in revenue. It hit the IZOD Center in East Rutherford Nov. 9, 2013.

«Until the End of Time»

«Only When I Walk Away»

«Let the Groove Get In»

«Not a Bad Thing»

«Take Back the Night»

Justin Timberlake at Wells Fargo Center: What you missed
NJ — Justin Timberlake returned to Philadelphia for the second time this year with «The 20/20 Experience World Tour» on Wednesday night.

The crowd at the Wells Fargo Center was excited to hear the Grammy Award-winning artist perform songs from «The 20/20 Experience», as well as hit songs from his past albums.

WHAT YOU MISSED
• With a packed house, Timberlake made a grand entrance with his band, the Tennessee Kids, rising out of the stage.

• The show stopper was in the second set when Timberlake and his back-up singers were raised on a platform from the stage, and floated over the crowd to the other end of the stadium during «Let the Groove». He performed on a small island stage toward the back of the stadium and walked out on to several cat walks making sure he greeted his many fans.

• In homage to his home state of Tennessee, Timberlake performed a cover of Elvis Presley’s «Heartbreak Hotel», including his best imitation of Elvis’ hip shaking moves. Along with this cover, he also covered Michael Jackson’s «Human Nature», transitioning from «Not a Bad Thing» into a acoustic version of «What Goes Around».

NOTES AND MUSINGS
• During Timberlake’s introduction and talk with the crowd, one very excited fan decided to throw underwear on the stage. Timberlake laughingly said, «I don’t know what I am supposed to do with that, honey». He picked them up cautiously, «We’ll hang them on the Christmas Tree».

• The Tennessee Kids were just as impressive as Timberlake, with their energetic horn section and shredding guitar players. They dance and perform following Timberlake’s lead, but also set the fun tone of the show.

• The screaming fans were almost as loud as the band, especially when Timberlake got down with his dance moves.

• The show never lost momentum. However, toward the end, The Tennessee Kids and Timberlake transitioned into a mash up of Kool and the Gangs «Jungle Fever», Timberlake’s «Murder» and «POISON» by Bell Biv Devoe, pushing the show to a new level of excitement.

For years to come.

The concert left little doubt that Timberlake is a performer for the ages: someone who already has transitioned not only out of his boy band days of ‘N Sync, but beyond the blue-eyed hip-hop of his first solo album to become a fully formed entertainer whose career seems able to last as long as he wants it to.

His two-hour-and-15-minute concert of 29 songs (and snippets of others) covered nearly all that territory (sorry, no ‘N Sync songs), but updated all of it and looked forward, with singing, dancing, onstage presence and production far better than any of his contemporaries.

The concert has even evolved since it first came through Philadelphia in November 2013. It was still a massive production, with an 11-member band, four backup singers and six dancers. And its size, especially early on, still sometimes overtook Timberlake’s performance — at the expense of his songs.

But — just four performances from the end of a tour that now has stretched 16 months — it seemed slightly less formulaic, as if it had found more room for Timberlake’s intrinsic talent to shine through.

For example, on the opening song, «Pusher Love Girl», Timberlake — dressed in a dark suit and white shirt but with no tie and sneakers (a subtle statement of less formality?) and with a full beard– sang in high falsetto and danced like Fred Astaire.

But he also a one point simply stopped and stood, hands in pockets, as the crowd cheered and screamed.

«That’s how we feelin’ it in Philly tonight?» he asked, then finished with an even higher note.

(Speaking of audience reaction — it spoke volumes that nearly 15 years removed from ‘N Sync, Timberlake still prompted a female to throw a pair of panties on stage. But the married, reported father-to-be responded, «I don’t know what I’m supposed to do with that, honey».

The show equally sampled his four albums, which now have sold 12 million copies and produced 10 Top 10 hits and 11 songs that have gone gold or platinum (he sang them all). And not a single member of the crowd seemed to mind the set was substantially the same as his last show at Wells Fargo Center.

But some songs early in the show leaned too heavily on production and we drastically rearranged.

«Rock Your Body» from his solo debut disc was orchestral, and combined with a snippet of «Don’t Hold the Wall». «Futuresex/Lovesounds» also was significantly different, slow and dirty, but both sensual and energetic.

«Like I Love You» also had a deeper groove, and by the time he started by rapping the lyrics of «My Love», then sang it alone at the front of the stage in a spotlight, the show was on the verge of being too much a «show».

But Timberlake pulled back at precisely the right time, taking off his jacket and teasing a cappella verses of «Summer Love» before doing a great version of that song and — on a red-lighted stage — an even better, funky version of «Lovestoned». Its coda was gentle yet desperate at the same time, making it perhaps the best performance of the night.

Continuing with the more muted approach, he played «Until the End of Time» on a white grand piano at the front of the stage and, still alone, sang Jay Z’s «Holy Grail», that segued right into a very good «Cry Me a River» that incorporated snippets of Nirvana’s «Entertain Us» and Led Zeppelin’s «Kashmir» to send the set.

After a 10-minute intermission, Timberlake opened his second set with a laser-filled big production on «Only When I Walk Away», then stripped it down to him on acoustic guitar for «Drink You Away» before the band joined him, unplugged around the microphone for «Tunnel Vision».

After a funky, loose and fun version of «Senorita», with him standing at the keyboards, came the biggest production part of the show. The front third of the stage lifted high to become a walkway that moved slowly overhead of the crowd.

As it did, Timberlake danced atop it with his troupe and performed «Let the Groove In», adding a snipped of Earth, Wind and Fire’s «Shining Star» that clearly showed his influences. At the back of the arena, Timblerlake left the walkway to play Elvis’ «Heartbreak Hotel».

As he did in the 2013 Wells Fargo show, Timberlake again showed he’s is no Elvis, but he committed himself well enough, and followed it with a great performance of «Not a Bad Thing», also on acoustic guitar. It’s one of Timberlake’s best post-N Sync songs, and was one of the night’s best.

Timberlake’s voice was a far better fit for Michael Jackson’s «Human Nature» — especially his falsetto — and it segued nicely into a stripped and stark «What Goes Around … Comes Around».

The new «Take Back the Night» as the walkway moved back over the crowd also was one of the night’s best — fresh and funky.

The return trip of the elevated stage over the crowd started with another fun and funk song, «Take Back the Night», followed by short versions of Cool and The Gang’s «Jungle Boogie», the new «Murder» and Bell Biv Devoe’s «Poison» (which was written by former Allentown resident Elliot «Dr Freeze» Straite.)

During all of them, Timberlake danced enthusiastically, and the band was especially impressive on its new jack swing on the final song.

Timberlake closed the main part of the show with his double-platinum hit «Suit & Tie» — smooth and suave, just like his matured persona.

But he returned for a burning five-minute version of his biggest hit, the triple-platinum «SexyBack» («I’m still runnin’ this bitch», he said) and an eight-minute closing of «Mirrors'» at the end of which he dropped to his knees on stage.

Before the end of the show, Timberlake — referring to the near-decade lapse of time between his tours — told the crowd, «We’ll make sure it’s not seven years till we do this again».

When Timberlake does decide to return, he’ll no doubt do it at the top, and with a show as good as the one he performed Wednesday.