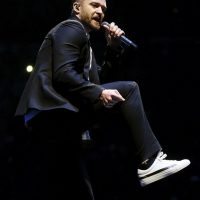 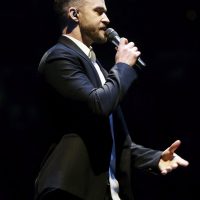 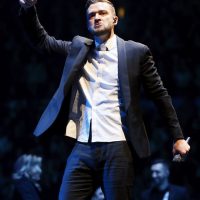 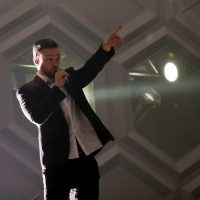 ‘The 20/20 Experience’ experience propels Justin Timberlake to the head of the pop pack
The Oklahoman — Justin Timberlake’s context doesn’t do him any favors, but he doesn’t need them anyway.

For the under-20 set, Timberlake’s sordid boy band past is kept alive primarily by animated GIFs and Buzzfeed lists—and a sorely disappointing ‘N Sync reunion at the 2013 MTV Video Music Awards.

Those of us old enough to remember Timberlake 1.0—and I saw ‘N Sync at what was then Texas Stadium when I was in junior high—fully understand that by now, he’s grown into more than just the sum of his ramen noodle-haired, denim-on-denim predecessor’s parts: He’s a bona fide superstar, a rare breed. He’s mega-famous but likable, eloquent enough, funny and, critically, he’s not generationally stunted in his fan base. People’s grandparents know Justin Timberlake, and so do their youngest children. My dad likes him. The pair of teenage girls next to me said they flew 14 hours to OKC for this concert, from New Zealand.

So take the head boy out of the boy band, and drop him onstage years later surrounded by a highly capable band (lovingly referred to as the Tennessee Kids), an expensive light show and a slew of seductive songs, and in this case, you have what’s sort of an ideal, universal arena pop experience: He’s not garish and neon, nor especially youthful like Katy Perry. He isn’t confusing or kind of scary like Lady Gaga, not eye-rollingly begging you to like him like some weaker-than contestant on «The Voice» and not beyond human comprehension like Beyonce.

Instead, he’s a professional entertainer who happens to be attractive, able to sing while he’s dancing, charming and sexy—but also definitely on the clock. His cool isn’t effortless, but meticulously calculated. And in this environment, maybe that’s even cooler.

Timberlake, clad in a black suit but no tie, opened the show with «Pusher Love Girl», from 2013’s «The 20/20 Experience», a slow-burning introduction preceded by a lengthy video montage. He swiftly moved into «Rock Your Body», the oppresively danceable ’70s-inspired hit from 2002’s «Justified», the debut solo record that catapulted him into, at minimum, mainstream acceptance, and at most, tipped off the would-be dismissives that maybe there was something more important happening with Timberlake than factory vocal runs and five assembled dudes dancing in unison…though this show had plenty of the latter, too.

A trio of memorable tracks from 2006’s «Futuresex/Lovesounds» (a fearless record so geniusly crafted for its time that it turned a certain pop-cynical college student into a full-blown fan) followed, then a tough-as-nails live rendition of «TKO», before a crowd address: «I see some girls that got their hair did. Dudes, you’re welcome. Don’t say I never did anything for you, single gentlemen».

Set one closed with revenge track «Cry Me a River», performed at, even by comparison to the rest of the show, an obscenely loud volume.
A brief intermission ended with «Only When I Walk Away», then an impromptu Garth Brooks cover of «Friends in Low Places», after which Timberlake labeled Brooks «the GOAT»—greatest of all time. The New Zealanders next to me had never heard the song, but the other 16,000-plus attendees confidently sang every note.

Later highlights include «Tunnel Vision», which JT performed solo in front of a video of naked women, and «Let the Groove Get In», a modern «Wanna Be Startin’ Somethin'»-esque number during which Timberlake & co. rode on a moving platform stage clear to the other side of the arena.

Covers like «Heartbreak Hotel», a nod to Timberlake’s Tennessee upbringing, and Michael Jackson’s «Human Nature» somehow paled in comparison to his own tracks, in the moment. That’s the thing about Justin Timberlake: Even his more recent singles seem immune to the ephemeral nature of pop songs. He’s inserted himself so seamlessly into the canon that the opening strain of a mindless, pointless drone of a song like «SexyBack» sends a crowd into a frenzy, excited to be a part of something we all already know. Even if that something isn’t very good.

Timberlake closed the show with «Mirrors», probably the strongest track from both editions of «The 20/20 Experience», a pseudo-ballad with swelling instrumentals and an inviting choice for a massive sing-along.

The 20/20 Experience World Tour was, I guess unsurprisingly, a get-what-you-pay-for ticket, and impressive from start to finish: a polished affair of a caliber that I haven’t seen from anyone in this genre, including a comparatively forgettable Timberlake himself, 15 years ago.