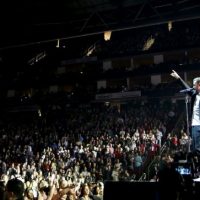 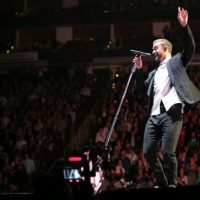 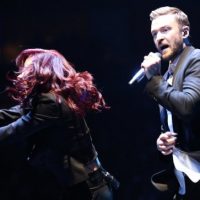 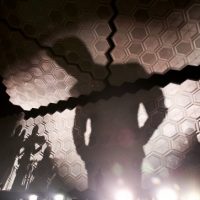 Mr. Timberlake brings his suit and tie back to Houston
Chron — The Justin Timberlake experience could — and should — be an annual event.

The prototypical pop star (indeed the blueprint for every current male singer) made his second stop in a year Monday night at Toyota Center. It was virtually the same show that entertained a sold-out crowd in Dec. 2013, from honeycomb stage design to set list.

Timberlake somehow managed to generate much of the same electricity. His enormous backing band, spare but spacious staging and fitted blazers give it a special-event vibe. (The JT Holiday Extravaganza!)

If there was any marked difference, it was in Timberlake’s demeanor. He seemed looser, to breathe more between songs. He clearly knows his way around this show and could by now do it in his sleep.

The crowd immediately burst into chants of «JT! JT!» after kickoff song «Pusher Love Girl». «Rock Your Body» was the first of many clapalongs. «FutureSex/LoveSound» vibed on Queen’s «Another One Bites the Dust»

It was all the motivation the crowd needed to keep the screams at eardrum-busting level for much of the show. Girls swooned and took selfies. Guys kept their heads and hips moving during «Summer Love» and «LoveStoned».

Even when Timberlake took things down tempo on piano during «Until the End of Time», the entire venue seemed to bristle with excitement (and lit up with cell phones). He cued up «Cry Me a River» with snippets of «Holy Grail» and smashed through it with the fervor of a closing number — only to return after a 10-minute intermission.

The show’s second half rode an assortment of retro grooves, aided by energetic horns and wailing backup singers. Timberlake riffed on Miami Sound Machine during «Let the Groove Get In», which again found him atop a raised platform that stretched across the entirety of the venue. It detached from the main stage and pushed slowly to the back seats, literally bridging the gap between fans. And it was still an awe-inspiring moment.

There were nods to forebearers, from Elvis Presley (a solid «Heartbreak Hotel») to Michael Jackson («Human Nature») and even ’90s group Bell Biv DeVoe («Poison»). But it was Timberlake’s own signature tunes — a commanding «Suit & Tie» and «SexyBack», the effusive high of «Mirrors» — that again proved his mighty pop power.

Justin Timberlake Stakes His Claim as Pop’s Top Dog
Houston Press — Ten years ago, Justin Timberlake played a show in Houston that shocked the world. It was the halftime show for Super Bowl 38 headlined by JT’s longtime friend Janet Jackson. He popped in at the end to sing «Rock Your Body», and that’s when her breast popped out. And thus, we will never forget the line «I’m gonna have you naked by the end of this song».

Timberlake’s concert Monday night at Toyota Center was nowhere near that controversial, but it was a grand spectacle of lights, dancing and music. A super-show, if you will. With a massive stage that included a video board that extended from one side of the arena to the other, Justin and his band the Tennessee Kids provided one of the most spectacular sets I’ve ever seen in Houston.

With the band elevating onto the stage, Justin appeared in the center of the platform lit by a single spotlight above. He was dressed in a black suit (no tie) and white sneakers, and opened with «Pusher Love Girl». The screams in the arena were piercing; I definitely picked the wrong show to forget my ear plugs.

«Rock Your Body» followed, and the show took off on a two-hour journey of hip-shaking and heartbreak. The set list was almost 30 songs long, with an intermission and an encore added in. There is no denying that Timberlake is the complete package. Maybe too perfect. He sings, he dances, he’s funny… Jessica Biel is one lucky lady.
His band was just as hype as he was, frequently joining Timberlake to dance and jump along to each track. «We are definitely Houston music fans up here», he told the crowd, proceeding to sing snippets of «Knockin’ Da Boots» and Pimp C’s verse off «Big Pimpin».
Now whatcha knowmbout dem Texas boyz, Justin?!

Actually, one of his back-up singers, Nicole, is from Houston. Her family was seated a few rows below my seats in section 120, proudly cheering and waving at their baby onstage. A really cool moment for sure.

After an intermission, the stage began to migrate its way to the back of the venue. With the platform mounted on two Zamboni-like vehicles, Justin and his crew flew across the top of the crowd, singing and dancing as they moved carefully to the B-stage at the opposite end of the arena floor. It was, without a doubt, one of the coolest tricks a performer has ever pulled at Toyota. Justin then paid tribute to Michael Jackson by singing «Human Nature», followed by a cover of Elvis Presley’s «Heartbreak Hotel».

Of course, no JT show would be complete without «Suit & Tie» and «SexyBack», and that is how it ended: with a clear vision as to why Mr. Timberlake is one of the best performers in show bizness.

Overheard In the Crowd: «Wow, that sounds so pretty» — Sister From Houston, who proclaimed this show the second-best of the year, with the On the Run Tour still in the top spot.

Random Notebook Dump: This is my first (of many, many more I hope) review with my amigo and Houston’s Best Music Photographer Greg Noire providing the photographs. Check out his extraordinary work on Instagram @GregNoire.