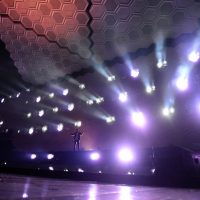 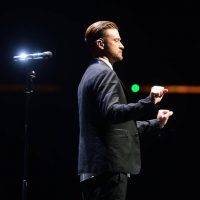 Did Justin Timberlake give us the concert of the year?

Charlotte Observer — The last time Justin Timberlake performed in Charlotte — at the old Charlotte Coliseum in 2000 — he was a teenager, perhaps as famous for dating Britney Spears as he was for being the youngest member of the boy band NSYNC.

On Saturday night, he returned, this time to Time Warner Cable Arena, this time solo, this time as a 33-year-old superstar entertainer who can sing well, dance well, play piano and guitar well and make you laugh, who is married to actress Jessica Biel, who turns everything he touches to gold.

He is famous, now, for being Justin Timberlake.

And for nearly 21/2 hours, Timberlake made a most convincing argument for concert of the year, delivering 28 sexy songs over two sure-handed sets (divided by a 10-minute intermission).

His show relied not on pyrotechnics and endless costume changes and confetti cannons, but on a combination of simple style — with Timberlake debonair in a black suit over an untucked white shirt, white sneakers and black ankle socks — and bold substance.

The headliner opted for cluttering the stage: two drummers, two keyboardists, three guitarists, four brass players, four backup singers and six dancers. If that sounds like chaos, it was. But in a good way. It felt like you were watching a party, and that vibe turned out to be infectious.

Yet it was impossible not to focus on Timberlake.

Except for when he sat down at a white grand piano to perform 2007’s «Until the End of Time», and when he grabbed an acoustic guitar for a few songs (including last year’s «Drink You Away»), he never just stood or sat there singing.

He always did something interesting at least, and mesmerizing at best, with his fingers, his hands or his shoulders, or his feet, his legs or his hips. In the spots in songs where there might be ripping guitar solos, Timberlake broke into slick dance solos, incorporating the precision of a robot but also the fluidity and natural cool of Usher.

His backup dancers are capable, too, and as a unit they were — pardon the pun — completely in sync. And for a guy who spent all the show dancing and none of it lip-synching, he never appeared out of breath. (Also defying belief: his perfectly molded hair, which occasionally flew up or fell down in his face but otherwise remained in perfect place.)

As far as the music, the crowd got what it came for, mostly.

One mild disappointment was the brevity of hip-hop anthem «Holy Grail», which he collaborated on with Jay-Z last year; he belted out just the initial verse, then quickly segued into «Cry Me a River», off his first solo album. Still, that early hit was a home run — it started conventionally, then morphed by its end into a fist-pumping rock song with electric guitars cranking a «Kashmir»-esque riff.

«SexyBack», the penultimate song, also got the rock treatment and enormous cheers; older hit «My Love» and newer smash «Mirrors» were highlights as well.

Perhaps the most memorable moment, though, came when a catwalk on hydraulics lifted Timberlake and his dancers over the floor and slowly to the back of the arena during the second set, allowing him to make the trip without having to wade through the crowd. Back there, he crooned covers of Elvis Presley’s «Heartbreak Hotel» and Michael Jackson’s «Human Nature».

After returning up front, he brought down the house by nailing Bell Biv DeVoe’s «Poison», during which he busted out the funkiest, funnest, most aggressive dance routine of the night.

He tugged at his jacket, adjusted his collar, swiveled, shimmied, shuffled, elicited shrieks, making it harder than ever to believe that this was once a kid who lived in the shadow of others.

Concert was bold and visually spectacular

The show kicked off promptly at 8:45pm when Timberlake emerged from shadows with an orchestral backdrop as he launched into «Pusher Love Girl». Flanked by his incredible band of musicians and dancers affectionately called «The Tennessee Kids», Timberlake danced, sang, rapped, and joked his way through a lengthy set list that spanned much of his solo career. Emphasis on solo as notably absent from the show were any nods to his NSYNC days.

As you’d expect with Timberlake’s ambitious project The 20/20 Experience, the concert was bold and visually spectacular, but also showcased his artistry as he effortlessly blended covers in with his own music from Elvis’ «Heartbreak Hotel» to Michael Jackson’s «Human Nature» to Kool and the Gang’s «Jungle Boogie» to Bel Biv Devoe’s «Poison» over the course of the 2.5 hour show.

The show concluded with an epic sing-a-long to his monster ballad «Mirrors», which seemed to genuinely touch Timberlake. Ever the showman, he stood center stage and soaked up the applause before disappearing into the shadows.