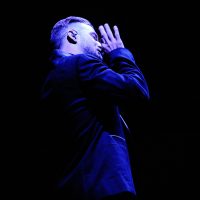 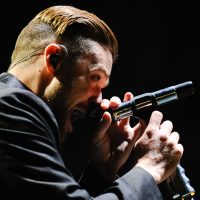 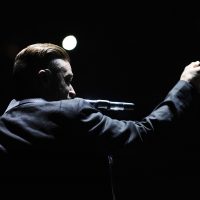 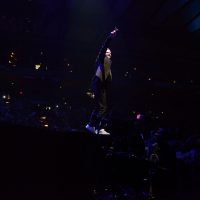 The Baltimore Sun — For the best showmen, connection to the crowd is paramount. To achieve it typically requires gestures both large and small.

On Monday, as Justin Timberlake performed the infectious, salsa-inspired «Let the Groove Get In» from a conveyor system that took him from the front of Baltimore Arena’s stage to the building’s opposite end, the night seemed to reach a predictable climax of moving parts, propulsive drums and thirsty screams from a crowd hoping to gain the singer’s attention. (Or to at least snap a clear photo on their phones.)

Afterward, the 33-year-old superstar moved to a platform in the middle of the floor and raised a shot to the sold-out crowd.

«Did I hear this correctly? The O’s are in first place in the AL [East]? Let’s cheers to that», the Memphis native said to some of the loudest cheers of the night. The crowd was already his, but the home-team shout-out sent Timberlake over the top.

Despite lukewarm reviews of his last album (September’s clumsily titled «The 20/20 Experience: 2 of 2») and film (blink and you might have missed the thriller «Runner Runner»), Timberlake remains one of our most beloved and amiable entertainers today. He proved as much throughout his nearly two-and-a-half-hour set on Monday.

In recent years, his appearances on «Saturday Night Live» and alongside late-night host Jimmy Fallon have shown another side of a talented performer whose eagerness to try hard is only eclipsed by his natural magnetism. His cover-boy looks — which came with a slightly scruffy beard on Monday — help, too.

That reputation, along with his underrated tenor and near-constant stream of hit songs, earned him an endless supply of goodwill from the crowd on Monday.

Timberlake wasted little time to pull out his best songs. After opening with the sweeping «Pusher Love Girl» at 8:30, he ran through some of his biggest singles — «Rock Your Body», «Like I Love You», «My Love» and «Summer Love».

Throughout the night, his large backing band the Tennessee Kids added horns and arena-rock flourishes to songs. Some benefitted from the bombast («Cry Me a River» sounded dramatically epic), while others would have improved by sticking to the recorded script (the slinking sexiness of «FutureSex/LoveSound» was neutered by unnecessary brass). Even in an arena, less can certainly be more.

Still, Timberlake is too seasoned of an entertainer not to deliver. On Monday, he played guitar, grand piano and Rhodes piano, on top of singing and dancing duties. At 33, his dance moves are fluid but limited, and there was no doubt he worked up a serious sweat on stage. He still pops and locks smoothly, and can hit choreographed moves with an efficiency that betrays his boy-band past. While his days of dazzling solely through movement are over, the most refreshing aspect of the night was the sturdiness of his tenor and falsetto. Timberlake is no vocal knockout, but almost all of his notes Monday were pure and confident.

Another nice moment came between singing, though, when Timberlake singled out Tennessee Kids trumpeter and Baltimore-native Dontae Winslow.

«You weren’t lying, man», Timberlake said to his smiling bandmate. «You said they were going to be crazy».

The stage banter felt genuine because the enthusiastic crowd was enraptured from the opening note. Even when Timberlake leaned on less-potent material (his last album simply falls short of his standard, as newer songs like «Take Back the Night» and «Murder» flatly illustrated), the crowd continued to hang on each word.

By the end, Timberlake — who retained a wholesomeness despite peppering the concert with four-letter words — had satisfyingly spanned his solo career, from 2002’s «Justified» to both «20/20» experiences. (He avoided NSYNC songs completely.)

Behind me were four women — two mothers with their daughters, presumably — who shrieked in unison at nearly everything Timberlake did.

«The vacancy that sat in my heart is a space that now you hold», they passionately sang with Timberlake during the encore of «Mirrors». He’s held that space for a decade for some, and even longer for more. Judging by Monday night’s performance, Timberlake’s grip could only be described as ironclad.

Post Examiner — Dressed in a black button-down short-sleeved shirt, black pants and white sneakers, Justin Timberlake stood center stage at Baltimore Arena, the spotlight shining on him as a packed house of 12,000 fans shrieked and screamed his name. He had just blasted through six of his biggest hits—including «Pusher Love Girl», «Rock Your Body» and «My Love»—in about 35 minutes without a break, so you couldn’t blame him for toweling his forehead and arms as he finally acknowledged his Charm City fans.

«I’m getting a good look at you guys right now», Timberlake said as he scanned the crowd.

If you looked away for even a moment of JT’s 20/20 Experience World Tour Monday, you probably missed something. Timberlake, his band The Tennessee Kids, and his backup singers and dancers soared through almost 30 songs over two sets and kept the party going all night with stunning visual and lighting effects.

If you weren’t there, or even if you were and it’s all still a blur, here are 10 things to remember from Timberlake’s Baltimore visit:

Justin Timberlake brings it to Baltimore

Hight Octane — Justin Timberlake has been suffering from an identity crisis in recent years. His acting talent and hilarious SNL spoofs have bumped the singer role further down on his resume. At one point, the former mousketeer risked being a Disney boy band bomb. However, at a sold out Baltimore Arena Monday night, some 20,000+ got to see just how extraordinary an artist he is when the singer shows up. At 33 years old. JT has long flirted with being relegated to boy toy pop star stereotypes. However, Timberlake is a pop music monster rightfully drawing comparisons to MJ. The 20/20 Experience is a mammoth tour with glitzy production and perfect ear shattering sound that rivals «The Wall». The very scope of the show has challenged the structural integrity of every tour venue. Being in the middle of a chaotic storm of lasers, smoke, pyro and 50 foot video screen images is daunting, but the second he and the band rise stealthily backlit from the floor, you know this man has it all under control. Despite his youth, he is a throwback artist in many ways. He respectfully starts on time and wears a suit. He can actually play piano and guitar. The incredibly enthusiastic Tennessee Kids band is an amalgam of funk, soul and rock and paints a texture on every song.

After opening with the soulful Pusher Love Girl, the Memphis, TN native strutted, swerved and funked his way through a massive 33-song set. Several times he mugged for the camera, praising the adoring sellout crowd and quipping, «The last time I was in Baltimore, it was with Jay (He of course meant fellow hip hop monster Jay Z.)» With guitars scorching and horns blaring, the band showcased its talent with a full on auditory assault during TKO. A large chunk of the second set was performed literally inch by inch when a portion of the elaborate main stage platform elevated 50 feet while the ensemble was line dancing and slowly traveled the length of the floor. He used the time to pay homage to Elvis saying, «I’m from Memphis, so this is for the king». He launched into a spot on cover of Heartbreak Hotel on acoustic guitar. He tipped his hat to MJ with a version of Human Nature that was instantly a collective sing along. He closed with a powerful version of Mirrors while bathed in lasers and spotlights.

The chorus of Suit and Tie reads,

«As long as I got my suit and tie,

I’ma leave it all on the floor tonight.