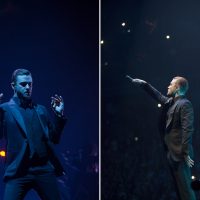 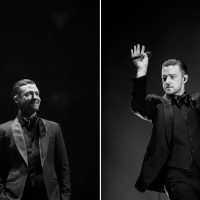 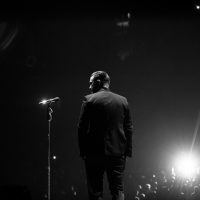 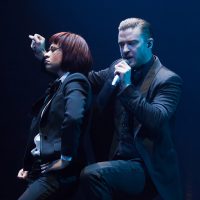 National Post — Justin Timberlake was in Toronto only six months ago, but that didn’t stop fans from filling up the Air Canada Centre on Thursday night to see this generation’s king of pop perform for his 20/20 Experience Tour.

Before we get into it, I think an important thing to note about Timberlake is that he’s one of the most agreeable artists of the modern era. If someone who likes hip-hop, somebody who likes rock and somebody who likes any other genre were all in a room together, they’d all probably agree on listening to Justin Timberlake. This is key to understanding the former boy bander’s musical importance.

As for the concert itself, the stage setup is fantastic, to say the least. A gigantic honeycomb background that also rises above the stage is used as both the biggest lighting rig I’ve ever witnessed and as a large screen to project video and graphics on throughout the show. The technical-production value of the show in the large scheme of concerts could probably only be rivaled by Lady Gaga or Nine Inch Nails. The bells and whistles were fantastic, the dances well-choreographed — to say nothing of the stage banter full of the standard cheap pops referencing Toronto and Canada) — but the music? To put it simply, terrific.

After a slow start due to a microphone malfunction («You were all so loud, you broke my microphone!»), Timberlake recovered by running through first album megahits Rock Your Body and Like I Love You, before an immaculate rendition of My Love.

Many of Timberlake’s hits were reworked to have a bigger role for guitar and a full band in a live setting, which didn’t hurt when used as a tool to fill out songs that could perhaps sound a bit thin when played in an arena. A few songs were also merged into other hits for the sake of set-time, with his part from the Grammy-winning Jay-Z collaboration Holy Grail seamlessly morphing into set highlight Cry Me A River. The added guitar solo and full band instrumentation only added to the song’s lyrics, despite the fact that Timberlake handed off much of the chorus to backup singers (which would become almost a theme throughout the night, during Timberlake’s biggest songs).

After a brief intermission, which Timberlake said was worked into the set so fans could grab a beer without missing anything, Timberlake ramped up the show to a whole new level. I mean he literally ramped it up, as a huge walkway 100 feet long rose up from the stage and across the entire floor of the ACC. Dancing back and forth across the structure and treating fans on both sides to Instagram photo-ops, the showman in Timberlake was on as full display — as were the lasers and lights — for Let the Groove Get In. I had to fight my professional photographer urges to not include a photo in this review from my iPhone.

As well as looking amazing, the catwalk allowed Timberlake to descend into the high-priced VIP bar area at the back of the floor where he performed up close and personally to those soaking up the atmosphere (and the alcohol). Granting some high five requests and crashing a selfie with a fan («Did you get it?»), Timberlake performed a few songs — including covers of both Elvis Presley and Michael Jackson songs — before concluding with a great acoustic rendition of What Goes Around. Then it was back onto the catwalk, and back to the main stage.

Timberlake closed out the show with predominantly new material, then pulled a double-punch finale with Sexyback and the Mirrors, which sounds even better in a live setting.

Timberlake could have phoned it in on this highly anticipated tour, but he did the exact opposite. Playing for almost two-and-a-half hours and investing the time and effort into the production value and lighting of the show, he didn’t leave fans disappointed. Here’s hoping he doesn’t make us wait another eight years for a new album (and tour).