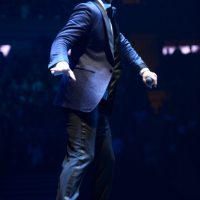 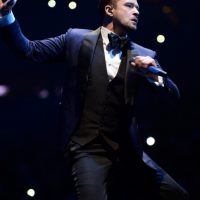 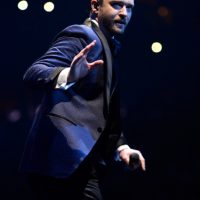 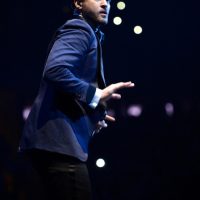 Bottom’s up as still-solid Timberlake delivers at Garden

New York Post — I never thought I’d get to see Justin Timberlake’s shapely posterior from a distance of six feet but on Thursday night at Madison Square Garden, the good folks of section 104 got one hell of a surprise.

Halfway through the second set, the samba best of «Let The Groove Get In» saw Timberlake and his six dancers begin to move across one end of the arena to the other atop a giant platform. As it came to rest in mid-air, JT moved to each side and for the (mostly) screaming women positioned underneath, it was a view they’ll probably treasure well into the afterlife.

It’s safe to say that Timberlake can still make hearts race and feet move. His appeal doesn’t seem to have waned even after a year of near constant exposure. Not only has he been pushing two volumes of «The 20/20 Experience», he also embarked on a stadium tour with Jay Z, made small but much-discussed roles in major movies and spent weeks at a time on the talk show circuit. Just about the only thing he didn’t do in the name of publicity is co-host the NBC Nightly News with Brian Williams.

But watching the 33 year old perform puts paid to any symptoms of fatigue. For two and half hours (divided by just one 10 minute intermission), the boy from Memphis and his band the Tennessee Kids waltzed through an impeccable set.

The hits came at the sold out crowd in a blur as Timberlake opened with the stoned soul of «Pusher Love Girl» before unleashing an uninterrupted 20-minute segment featuring smash hit singles like «Rock Your Body» and «Like I Love You». Decked out in his trademark suit and tie, Timberlake made the choreography look like second nature and he showed very few signs of the ill health that forced him to postpone Wednesday night’s gig just minutes before doors opened.

The second half of the show was where Timberlake’s variety act kicked in and if anything, it was even more entertaining. Padding the show with covers is usually the work of an amateur but Timberlake handled Elvis Presley’s «Heartbreak Hotel» and Michael Jackson’s «Human Nature» with love and care before moving back to his own crowd pleasers.

Having worked every inch of the arena and brought every member of the crowd to their feet, «Suit & Tie», «Sexy Back» and the still incomparable R & B of «Mirrors» rounded off the night in a way that was faultless. Familiarity usually breeds contempt but when watching this, it’s hard to feel anything other than awe and excitement.

Wednesday’s postponed performance has been rescheduled for Friday 21st. If you have tickets then know this: the seats at the back are probably the best ones in the house. Make sure those camera phones are charged.

Village Voice — The last time I saw Justin Timberlake live, he was still part of *NSYNC and filling stadiums with excited children and annoyed parents for the boy band’s final tour. Since then, he’s gotten married to someone who is not Britney Spears, pursued a film career, and with every album, embarked on a brand new level of musical maturity. It started with 2002’s Justified, the rootsy R&B release that has become the template for successful male pop star maturation in the 12 years since its debut. He progressed with the even better FutureSex/LoveSounds in 2006 and has most recently added the massive, two part musical «comeback» of sorts, The 20/20 Experience.

At Madison Square Garden, part of some of the last dates of the second North American leg of his world tour, Justin Timberlake was in rare form. Comeback is an inappropriate way to describe this particular performer — one with an already hefty canon of solo hits from four albums and two released within only the past year. With ease and charm, Timberlake makes the lengthy wait for new material and live performances seem like it was more than worth it all along.

In front of a large, white screen patterned with hexagonal shapes, the singer appeared behind his Tennessee Kids — the providers of live instrumentation that have been accompanying many of Justin’s televised performances and were a prominent fixture in the show. On stage, JT became more than just a solo artist; though the star can’t help but shine ever so brightly, he allowed himself to blend with the dancers, singers and musicians as if this were a band he had been in for years. Shrouded in dim lighting as the horn section blasted behind what looked like pulpits at the altar of the Church of JT, Timberlake crooned his way through the sweetly hazy «Pusher Love Girl», from Part I of last year’s double feature. As the band played, the star showcased his crystalline falsetto and busted out his famous moonwalk-pop-and-lock he has made a fixture in his shows since the beginning of his post-all-boy synchronized choreography days.
The opener catapulted the show into a well-crafted mix of old and new hits that made Part I of the concert an emotionally turbulent (at least for me) and exciting set. Jumping from album to album, Timberlake allowed the audience to catch the sonic similarities as easily as they could identify the differences. He stormed through an early string that began with Justified’s refreshed disco track «Rock Your Body», followed by 20/20 Pt. 1’s tribal beat-laden «Don’t Hold the Wall», which led to the sexy and underrated «FutureSex/LoveSound», the pulsating opener from the album of the same name. For that particular throwback, as well as its follow-up «Like I Love You» and several other songs from the first half of his solo discography, the band hardened the songs, making the beats and instrumentation simultaneously trap and hard rock in a way that is less gross than it sounds. In the middle of «Like I Love You», JT gave a quick cover of Kanye West’s «I Am a God», which found itself nuzzled perfectly in the middle of the musical aesthetic’s weird duality before he abruptly stripped down the beginning of «My Love», singing with only a piano accompaniment before returning to its natural pace.

After «TKO», Timberlake took his first extended break to address the audience and sang a respectable cover of Frank Sinatra’s anthem «New York, New York». A huge chunk of FutureSex/LoveSounds began to round out Part I before a quick «Holy Grail» detour then an enthusiastically received «Cry Me a River». It was a great closer for the first half, and after the ten-minute intermission, Timberlake took the show into a much more 20/20 Experience-friendly direction, with the very Memphis «Drink You Away» being a country-friendly standout.

During «Let the Groove Get In», JT floated above the audience atop a large moving piece of the stage. On the other side of MSG, he pursued more covers, including one each by his most obvious influences, Elvis Presley and Michael Jackson. Both were outstanding and his version of «Human Nature» served as a delightful highlight, especially as he added a touch of melancholy as he returned to it after performing his single «What Goes Around…Comes Around». Later, a version of the Ultimate Jam, Bell Biv DeVoe’s «Poison», had Timberlake returning to his boy band roots as he assembled a makeshift one with two Tennessee Kids members who co-sang lead with him. It arrived in the middle of a blazing chunk of exit tracks that built up until the power trio that is «Suit & Tie», «SexyBack», and «Mirrors» closed out an electrifying set.

As the opening, stadium-made power-chords of the romantically cliche «Mirrors» began triumphantly, Timberlake’s exit encompassed the very essence of his power as a performer. His showmanship, class, and impeccable ease in which he can deliver an over two-hour set of music that barely allows for any time to sit, breathe or falter all boiled to those final moments as he let the fans sing back to him a song that, within its barely developed young life, has already budded into its own kind of icon, just like its creator.

Singersroom — On February 20 & February 21, 2014, RCA records recording artist Justin Timberlake hit the stage in New York City at Madison Square Garden arena. A few difficulties appeared prior to the concert; the singer being under the weather, postponing Wednesday’s concert to Friday, and time management. But, these challenges didn’t intervene with the singer’s mission.

Justin or some would say JT is one of music’s biggest acts, so he had to deliver a show that most people would not forget in their wildest dreams. And the ‘Suit & Tie’ singer and actor achieved his goal.

JT’s 30-song set was divided into two segments, which included a 10-minute intermission. He performed probably all the heavy hitters that he released over the past 12 years . Audience members were screaming from the tops of their lungs when he sang, «Pusher Love Girl,» «FutureSex/Love Sound,» «Like I Love You,» «TKO,» «My Love,» «Summer Love,» «Holy Grail,» «Cry Me a River,» «Suit & Tie,» » Tunnel Vision,» «Senorita,» the late MJ’s «Human Nature,» «Take Back The Night,» «Sexy Back,» «What Goes Around..Comes Around,» or the love ballads, «Until the End of Time» and «Mirrors.»

During his set, you could tell fans were highly impressed by Timberlake’s stage presence. There were no empty seats in sight; fans were dancing non-stop. JT’s showmanship was also enhanced by great lighting, his back-up singers and instrumentalists, and how each graphic on stage blended with each song he was performing. JT even had a personal interaction with fans, especially when he used an electric stairway to greet and sing to them, which was amazing.

For two nights, Justin’s showmanship and God-given talents were sternly present. The singer knows he can spark his audience with his excellent dance moves, humor, and last not but not least, his VOICE! It was definitely worth every penny because it was more than just a concert. Fans were partying with the well-groomed singer. It even knocked out his 16 minute performance at the MTV Video Music Awards out the water.

Justin’s solo career continues to take off to the highest capacity; he can be the male version of Madonna. The former Mousekeeter and NSYNC bandmate sets himself apart from other artists because he is an ENTERTAINER!