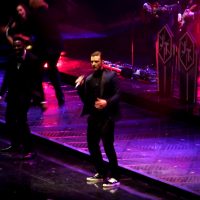 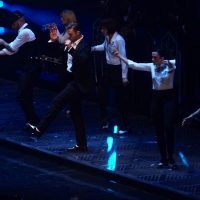 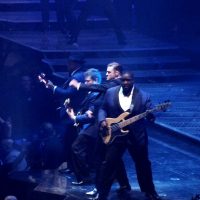 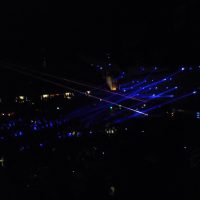 He returned to the Fargodome on Friday night older, wiser and even more of a lady-killer.

«We all got older, huh?» he said halfway through the first hour-long set. «You look good. I think y’all got better».

The singer’s growth from bubblegum pop to neo-soul has played out in front of cameras, but seeing was believing for Fargo fans.

Taking the stage in a black tuxedo, the singer opened after a sweeping orchestral intro launched into a creeping «Pusher Love Girl».

He wasn’t just paying lip service to a vintage theme. Toward the end of the 2 ½-hour show, the honey-combed screen behind the stage switched to black and white to show the action during «Suit and Tie». The whole set had a very stylish, 1930s and ’40s vibe.

Backed by the 16-piece Tennessee Kids, the four horns and four back-up singers added a depth that can be missing from his studio recordings. Fitting with the design, they mostly performed behind music stands, but game out to play it up with the star.

Timberlake doesn’t need to lean on the band. he showed his vocal range, reaching falsetto notes on «My Love». Balancing the tender with a swagger, he followed that up with the pulsing «TKO».

He’s a man of many talents, and his dancing is as big a part of the show as singing. He wears the phrase «song and dance man» as well as he wears suits, gliding over the stage with childlike ease, but with moves that are, well, more adult.

Which brings up one of the show’s faults. In lieu of big screens showing all of the action on the stage, the honeycomb backdrop often had other images or pat-terns projected when it would’ve been nice for those farther away to get a closer look at his fancy footwork. Sometimes the screens didn’t show any-thing, and with the lighting often being atmospheric and dark, the star was sometimes deep in shadows, to the dismay of those in the nosebleeds.

It’s a small complaint for a show that got better as it went on. The star didn’t come out until 9:01 (a reference to his 901 Tequila?) and the first set dragged in the middle before he closed the half out with an electrifying «Holy Grail/Cry Me a River» medley.

After a 10-minute inter-mission, he returned full force with a pounding «Only When I Walk Away».

He was back to stay. Strapping on a guitar, he brought the band front and center for a rollicking «Drink You Away», a tune that got those of age to raise a glass.

«You’re probably getting drunk as hell», he said to one man in the crowd.

It’s like he was reading our mail, or just the head-lines about North Dakota having a problem with binge drinking.

He kept the party going, playing keyboard for a fun version of «Señorita». Then he brought the party to the back of the room for «Let the Groove in», riding the front part of the stage as it coasted above the crowd like the wing of a taxiing plane, before parking in the VIP lounge.

Membership has its privileges as those who paid top dollar got an up-close view of the star as he worked the area and even had a drink before paying homage to his hometown hero, Elvis Presley, playing guitar to «Heartbreak Hotel».

(The other perk was if they looked around, they could’ve spotted JT’s wife, Jessica Biel, sitting on a raised platform behind the VIP area.)

From the King of Rock ‘n Roll to the King of Pop, two songs later he paid tribute to an obvious idol, Michael Jackson, singing a faithful rendition of «Human Nature» that bled into Timberlake’s own, «What Goes Around».

After frolicking with his female dancers to «Cabaret», it was time take to the air again, rolling back to the stage with disco-inspired «Take Back the Night».

Back with the band, they sandwiched «Murder» between Kool & the Gang’s «Jungle Boogie» and Bell Biv DeVoe’s «Poison».

With the end drawing near, JT brought out the big guns, first with «SexyBack», with so many lasers and thumping bass, the Fargodome was successfully converted into a dance club for a period.

Even better was the finale, «Mirrors», with its infectiously catchy chorus, a natural sing-along, or clap-along as was the case.

«Mirrors» was released a year ago and is easily one of the star’s biggest hits, suggesting some even bigger hits are yet to come.

All he proved at the Fargodome Friday night is that he is the biggest male pop singer out there now.

When Justin Bieber decides that it’s time to grow up, he should look to Timberlake to see how it’s done.