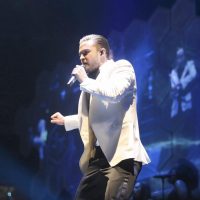 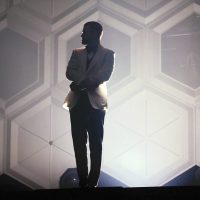 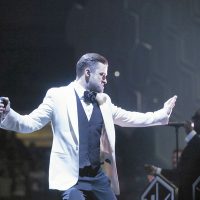 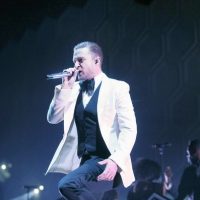 redeye Chicago — No one, not even Justin Timberlake, can do it all. Actually, strike that—JT seemingly does it all. He just doesn’t do it all equally well.

Beginning an hour late and delivering a 140-minute, entertaining but uneven show Sunday at United Center, the pop singer/musician/actor/comedian/entrepreneur/golfer covered Elvis Presley («Heartbreak Hotel»), Michael Jackson («Human Nature») and Bell Biv DeVoe («Poison»). He danced with remarkable ease but also spent a significant amount of time playing piano and acoustic guitar, the latter a particular point of emphasis despite no impressive aptitude for it. He sang bits of Kanye («I Am a God») and R. Kelly («Ignition [Remix]») to honor Chicago, saying he loves the city even more than his hometown of Memphis, Tenn. He toasted a shot to both Michael Jordan and Ferris Bueller, going on to misquote «Ferris Bueller’s Day Off» by saying, «Ferris… Ferris… Ferris…».

Timberlake’s eagerness to be liked makes him an excellent showman and a guy who’s sometimes too much a part of the party instead of the star of it. At times during the show, especially during forgettable material like «That Girl» and «Drink You Away», he felt like the night’s host, doing karaoke versions of his own songs. That’s night and day with the effortless cool he brought to «Like I Love You» and the funky «LoveStoned», which really let his 15-piece band, the Tennessee Kids, strut. JT too often called for sing-alongs–not everyone knows the words to «Summer Love», man; they’re here to hear you sing it. But when the crowd did come alive, as in the closing, exceptional «Mirrors», there was a sense of community and emotion that’s otherwise lacking in the artist’s frequently clichéd lyrics.

Following a 10-minute intermission, the night’s second set connected better than the first. That’s partially because of the platform that moved from the stage all the way to the other side of the venue, creating electric dance parties during «Let the Groove Get In» (on JT’s journey away from the stage) and «Take Back the Night» (on the way back; click here for video). In those moments, JT was getting closer to many people in the crowd, and the show felt different, special. He should embrace that looseness; there’s nothing wrong with being polished, but the dapper-looking gent’s impeccably well-rehearsed performance also lacks vulnerability. More time spent singing alone, without any backup support, would increase the intimacy. He’s casual and smooth, but his swagger keeps him at a distance.

Yet when JT really hit his stride, as in the combo of «Take Back the Night», «Murder» (with an introductory quote of «Jungle Boogie») and «Poison», he was in command and expertly allowing the crowd in on the fun. It was a four-star section of a three-star show that only reaffirmed what’s been true of the man for a while: When he’s good (most of his singles, «SNL»), he’s really good. When he’s not (most of «The 20/20 Experience Volume 2», «Runner Runner»), you wish he’d focus on what he does best.

Timberlake does it all with flash at United Center

Chicago Tribune — Justin Timberlake has embraced adulthood with some flash and some grace.

Timberlake, who performed the first of two shows at the United Center Sunday night, took a break from music to do some acting. He’s pretty good at that. He’s also done some nice comedic turns on «Saturday Night Live» and with Jimmy Fallon. So, it might be safe to say he’s an all-around entertainer, a title few people can claim now.

If Sunday’s show was any indication, he’s nailed the music and spectacle part. He and his Tennessee Kids band, which numbers 15 not counting the six dancers, made a two-hour show fly (unlike Timberlake’s «20/20 Experience» double album, which is a bit lumbering). A honey combed backdrop served as video screen and lighting grid. Lasers danced over the crowd, most notably during «Only When I Walk Away.» Talk about kicking it old school.

The show included a 10-minute intermission (Timberlake noted that «Chicago is a drinking town» to explain the break).Of the 12 songs performed before the break, four were some of his best known: «Rock Your Body,» «Summer Love,» Holy Grail» and «Cry Me a River.» You had to be concerned about what would come next.

Rest easy. Five songs into the second half of the show, Timberlake pulled a jaw-dropping move. The stage was the usual assemblage of ramps for the dancers, lifts for the bands, Timberlake himself, plus a Fender Rhodes keyboard and white grand piano.

Once the «Let the Groove Get In» was established, the front part of the stage and the attached clear polymer steps rose on hydraulic lifts while Timberlake, four backup singers and the dancers kept up the action. Then, the whole assemblage moved toward the back of the floor while Timberlake sang «That Girl» and «Heartbreak Hotel.» He is a Memphis boy after all. Bookended by «Hotel» and Michael Jackson’s «Human nature» was «Not a Bad Thing,» which is well described by its title. The whole apparatus returned to the A position (hey, Timberlake likes golf) while he performed «Cabaret» and «Take Back the Night.»

Timberlake also added a few other old school touches. A snippet of Kool and the Gang’s «Jungle Boogie» preceded «Murder,» which was followed by Bell Biv Devoe’s «Poison.»

Not surprisingly, Timberlake closed the show with «Suit & Tie,» «SexyBack» and «Mirrors.» Hearing «SexyBack» with a powerful live band, and Timberlake playing with tempo and false starts was unforgettable.