Vancouver takes the cake!!! Y'all sang and danced harder than me tonight!! I love #VanCity INCREDIBLE energy and INCREDIBLE people. 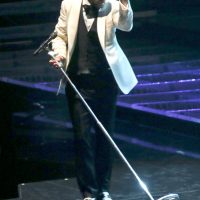 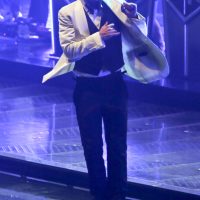 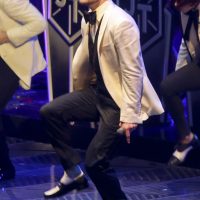 VANCOUVER Sun — You can fault Justin Timberlake for a lot of things.

If you’re a fan of his music, you can get on his case about his absence from the scene for close to seven years as he groomed his film and television career and left the concert stage and the studio (mostly) behind.

You can also fault him for his two 20/20 Experience volumes released last year. As far as comeback blockbusters go (and they sold truckloads, making him the top selling artist of 2013), the two albums felt like last-minute contractual obligation attempts, especially the second volume. Too much material spread out for too long, with only a few memorable moments.

And you can still fault him for teaming up with MySpace. (Meh.) But you couldn’t find too many faults in Justin Timberlake’s oversized performance at Rogers Arena Thursday night.

With two hefty acts, overblown visuals and a seismic band to back him up (the solid Tennessee Kids), Timberlake rocked everyone’s body with a career-spanning set that, evidently, put his two 20/20 albums squarely in the spotlight.

Garbed in a snazzy white suit jacket and bow tie, his hair slicked back, Timberlake cued the band into Pusher Love Girl, the honeycomb backdrop (which extended above the stage and dwarfed even Roger Waters’ The Wall setup) coming to life with strobing lights.

In first-class R&B club crooner mode, Timberlake had the near sold-out crowd going absolutely bonkers from the outset.

Eat your heart out, Michael Buble.

The club vibes hit hard during a Rock Your Body that had fans dancing in the aisles, Timberlake shimmying and shaking his way through the crowd favourite.

A brassy Don’t Hold The Wall followed, Timberlake slipping and sliding all over the stage in his shiny shoes, backup dancers in tow.

The sound mix’s limitations were apparent when JT re-upped his classic FutureSex/LoveSound, the title track from his 2006 masterwork, where an ambient, horn and keys-heavy reinterpretation with a James Bond flavour lost some of its intended traction.

Vocally, Timberlake played it loose and easy, hitting the highs without pushing too hard, pausing repeatedly to take the pulse of the crowd.

Warmed up, he went all smooth and sugary for an atmospheric jazz piano intro to My Love that soon shifted into the wobbly Timbaland-produced version of the song, before all hell broke loose as the floor began jumping on cue during an electric guitar crazy coda.

There was little opportunity to take a breather during the concert’s first hour, and if it wasn’t exactly TKO, it was pretty close.

Strangely enough, the crowd seemed more mesmerized by the concert’s top notch tech than JT himself during more subdued 20/20 stuff like the meandering Strawberry Bubblegum, at which point the bow tie came off and the suit jacket was cast aside.

Playing up the green smoke angle is a bit like shooting fish in a barrel in Vancouver, but following up with Summer Love and LoveStoned felt like a bit of a high, smoke-induced or not.

A 10-minute break followed the first act’s climactic combo finale of a cover of Jay Z’s Holy Grail and the cathartic Cry Me A River, JT’s ode to his Britney Spears breakup that still feels all too raw.

The second half of the show would kick off with lasers blazing and would feature Only When I Walk Away, the voodoo-laden True Blood and a number of more party-oriented grooves and covers of Elvis Presley’s Heartbreak Hotel and Michael Jackson’s Human Nature.

At one point the entire front of the stage and its plexiglass platform rose and rolled across the room, stopping at the back of the arena to the delight of many fans stuck far from the action.

It was a feat of technological wizardry (not to mention an eye-popping stunt) that defied logic.

An acoustic What Goes Around…, Take Back The Night, Suit and Tie, and SexyBack would be the many cherries on top of a pop concert that clocked in well past the two and a half-hour mark.

As a recording artist, Timberlake’s output is somewhat debatable.

As a showman — and he proved it by stealing the show from Jay Z at last year’s Legends of the Summer concert at BC Place — he’s a tough act to match.

So who knows what the future holds for this Mouseketeer turned boy-band alum turned multimedia star? Only hindsight will tell. And we all know the score on that one.

Straight — «We ought to come here more often», Justin Timberlake commented about halfway through his three-hour marathon of a performance at a packed Rogers Arena. He was jokingly referring to the fact that his prior Vancouver appearance, on his summer tour with Jay Z, took place a mere six months ago.

«If I come back, will all y’all come back?» Timberlake asked. Judging by the screams of delight, the crowd’s answer was a unanimous «yes».

It’s no mystery as to why Vancouverites have such a voracious appetite for the onetime ‘N Sync star, since this show was an eye-popping spectacle of epic proportions. One entire end of the arena was taken up by a geometric, honeycomb-shaped video screen, which extended overhead and formed a roof above the sprawling stage. The screen came to life during the night’s introductory swells of ambient noise, which gave way to the ascendant Old Hollywood orchestrations of «Pusher Love Girl».

The man of the hour appeared suddenly, as if from nowhere, materializing at the top of the two-tier stage to deliver the opening lines. As the soulful arrangement swelled, his massive backing band rose from out of the floor. Dubbed the Tennessee Kids, the ensemble included two drummers, four backup singers, and a horn section, among others.

The Memphis-born Timberlake wore a white suit jacket and a bow tie with his hair greased back, while the rest of the musicians looked similarly dapper in their formal attire. They were joined for most of the evening by a troupe of six backup dancers, who emerged to join the frontman in an intricately choreographed routine during the funky disco pulse of «Rock Your Body».

The performance was split into two sets, and these highlighted a selection of cuts from last year’s The 20/20 Experience and its 2 of 2 companion piece, in addition to offering an overview of some of JT’s finest back catalogue cuts. He played a white grand piano during the mega-ballad «Until the End of Time», and the venomously slinky «Cry Me a River» capped off the first half with a bombastic crescendo of blaring horns and wailing guitar solos.

Timberlake could have ended there and most folks would have probably been satisfied, but we weren’t even halfway through the show. Following a 10-minute break, he returned to the stage having changed into an all-black suit. Soon after, he quipped, «I’m 32, I need the break. Fuck you, we can do the intermission if I want».

Despite this moment of sassiness, he was clearly delighted with the audience’s enthusiasm, saying, «We started this tour in November. This is, by a mile, the craziest crowd I’ve seen». Maybe he says that in every city, but he certainly appeared sincere. (Then again, he has a successful Hollywood film career, so it’s difficult to be sure when he’s being earnest.)

The most mind-blowing moment came during the worldbeat-tinged «Let the Groove Get In», when the walkway at the front of the stage rose 15 or so feet into the air and, through a startling feat of engineering, moved slowly forward across the length of the floor. This took the ex-Mouseketeer and his backup vocalists on a dizzying journey over the fans’ heads to the opposite side of the venue.

Once there, Timberlake and company descended to play a few comparatively stripped down numbers on a raised platform while surrounded by fans, who were understandably shrieking and going ballistic. This interlude included covers of Elvis Presley’s «Heartbreak Hotel» and Michael Jackson’s «Human Nature», plus a folksy twist on «What Goes Around… Comes Around» that gave the multitalented singer a chance to show off his fingerpicking skills on acoustic guitar.

After lifting the energy with the lusty «Cabaret», he climbed aboard his incredible moving walkway and headed back to the front while singing «Take Back the Night»; at one point during this return journey, he sat perched at one end of the platform, his feet dangling scarcely 10 feet from my head.

After this insane display, the last few tunes seemed fairly tame by comparison—in terms of sheer grandeur, dance choreography, and large video screens are no match for a travelling walkway. That being said, «Suit & Tie» was a standout fan favourite. At the end of the song, the superstar took a bow as the lights went down, but he didn’t even bother exiting the stage before saying that he wasn’t ready to go home and launching into his encore.

The thumping «SexyBack» inspired some of the loudest cheers of the night, and Timberlake then finished with his epic love anthem «Mirrors». During this finale, he spent some time dancing without a microphone, allowing his backup vocals and the audience to take the lead.

As always, this was impeccably rehearsed and meticulously executed, without a step out of place. By the end of it all, I found myself half hoping that Timberlake would stumble or flub a note, just to prove that he was human. On this evening, there was no such luck.