Seattle gets down… For real. Shout out to @macklemore and some of the @Seahawks for coming. Oh, and Frasier Crane. #ilovedthatshow 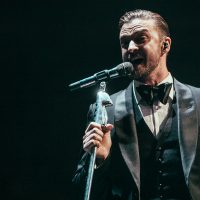 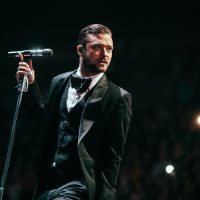 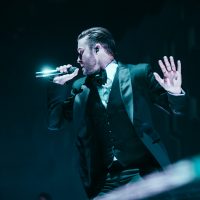 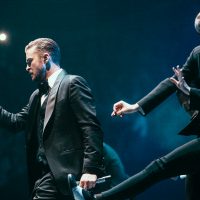 Serving as a kind of honorary 12th man, the chart-topping pop star turned his colorful, high-energy show into a mini Seahawks rally in advance of Sunday’s big game.

«It’s a very big weekend in this city», he teased, adding that a number of Seahawks were present. He led the audience in a boisterous chant of «Sea! Hawks! Sea! Hawks!» and offered a good-luck toast before downing a shot: «Here’s to this weekend!»

But even without the pep talk, Timberlake’s fans were ecstatic over the singer, dancer and musician’s high-powered arena show, which mixed state-of-the-art visuals and special effects with a party-till-you-drop fusion of pop, soul, R&B and hip-hop.

After opening with «Pusher Love Girl» from his current album, «The 20/20 Experience», the 32-year-old pop sensation took a moment to bask in the crowd’s adoration at the front of the extended stage.

After the year he’s had, Timberlake deserved it. The former lead singer of ‘N Sync and one-time Mouseketeer has been nominated for 42 awards, including seven Grammys. And «The 20/20 Experience» is the top-selling album of 2013.

Dressed in a black tuxedo with snazzy black-and-white shoes, the Memphis, Tenn., native romped through a set of about 30 songs, backed by the Tennessee Kids, a seasoned troupe of 11 musicians featuring a four-piece horn section, plus four singer-dancers performing tightly choreographed routines.

The show’s most surprising feature was a giant Plexiglas-like stage section that rose up and moved from one end of the arena to the other on motorized dollies. It resembled a giant Boeing 777 wing on which Timberlake and his more agile band members sang and danced, to the crowd’s delight.

But the show also had a retro look, with old-fashioned bandstands for the musicians and black-and-white videos that recalled the Fred Astaire era.

Indeed, Timberlake embodies the classic high-gloss entertainer of decades past, but with modern edginess. Timberlake sang in a sweet, effortless falsetto, danced with extraordinary precision and skill, and played a couple of songs on a white grand piano.

The show was heavily stocked with crowd favorites, including «FutureSex/LoveSound», «Cry Me a River», «Drink You Away», «Tunnel Vision», «Let the Groove Get In» and «That Girl».

Two of Timberlake’s biggest hits, «Suit & Tie» and a laser-enhanced «SexyBack», were saved for the last explosive moments of the crowd-pleasing show.