Denver… Thank you for giving us one of the loudest and craziest crowds we have seen! What a way to end this leg before our break! 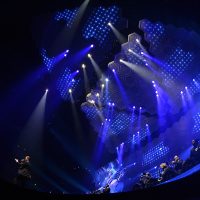 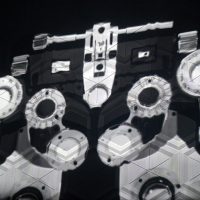 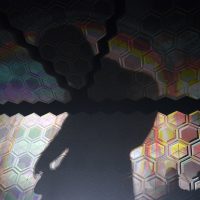 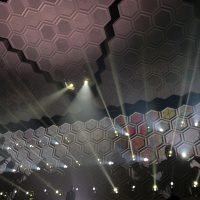 The Denver Post — Yes, we know Justin Timberlake is one of the great showmen of our time. Some prefer his work on «SNL» and other late-night shows to his music. Others, like me, are aficionados of his whole catalogue but prefer his music to everything else.

So there we were Wednesday night, me the music fan and Justin the music man and 15,000-plus of our nearest and dearest at Denver’s Pepsi Center. It’s straight out of a pop music storybook, right?

For the most part.

A few questions I ask myself after any show while walking out of the venue, that excitement still jittery in my bloodstream:

Was it truly great? This show was, absolutely. JT and his band brought it.

Did you leave feeling one song in particular? O hells yes, «Mirrors». I’ve admitted before my love of that song, and it hasn’t faded.

Was it a let-down in any way? It was. It hardly ruined the show for me, but JT handed off many of his signature vocals to his very capable back-up singers regularly.

Before the uber-fans start sharpening their claws, let’s get this out there: This is a positive review. Great show. Good times. Yes. But it’s not blindly positive — and hopefully you wouldn’t want one written that way. Even though I think the first «The 20/20 Experience» is a brilliant album. Even though I, too, love his preternatural skill and presence on «SNL». Even though I saw JT in a 800-capacity club at last year’s South by Southwest Music Festival and ranted and raved about it at the risk of sounding like a loser who saw a well-established pop artist at a festival that’s supposed to be about music-discovery.

So Wednesday’s show — it was a mammoth dance party. It had a few dips and bathroom breaks, and Timberlake himself even took one in the form of a 10-15-minute intermission, which seemed mildly unnecessary. But for the most part, JT kept the crowd on its feet and moving.

«Pusher Love Girl» got things going, and «FutureSex/LoveSound» and «Like I Love You» were the highlights of the first third. JT covered some significant ground on Wednesday, including more than 30 songs. He managed his setlist smartly and even «TKO» and «Strawberry Bubblegum» held together and keep the crowd enrapt.

The winners of the second third of the concert, which was the weakest segment, were «Cry Me a River» and «Senorita», two of the biggest hits off his late-2002 solo debut «Justified». During some of JT’s lesser songs it’s easy to look at things outside the music, including choreography; It was then when I realized how seamless it all was. JT’s back-up dancers were constantly moving, but the choreographers artfully wove JT’s limited moves effortlessly into his dancer’s grander movements. It transcended traditional pop choreography.

The last third of the concert was as silly as it was great. JT got liberal with covers — Elvis Presley’s «Heartbreak Hotel», Michael Jackson’s «Human Nature» and Kool & the Gang’s «Jungle Boogie». «Human Nature» was stunning, while «Jungle Boogie» was a bizarre but funky surprise. But none of the covers compared to «What Goes Around … Comes Around» or «Mirrors», which both put the audience into a blissed-out groove.

JT closed the show with «Mirrors», and for good reason. That intro is so grand — it’s arena pop. That chorus is so potent. That voice just soars across some incredibly tough vocal lines and tongue-twisting lyrics. And «What Goes Around» is one of the best songs JT will ever write, a pop ballad with timeless appeal and some really great vocals.

And that brings us to the question of JT passing off his vocals so often throughout the show. It happened repeatedly — JT and the band would be working through one of his biggest numbers, and as it was coming to a climax he’d drop the mic or hold the mic stand out to the audience or something else that didn’t involve him singing.

Granted, 30 songs is a lot night after night. But it’s not like he’s singing full versions of the songs — many were shortened for live performance. And while his back-up singers have lovely voices, one of which particularly mimics JT’s, we didn’t pay to hear them sing some of the more dramatic vocals of the night.

You could say it’s a small concern. And it kind of is. But it reminded me of an Al Green show I saw in 2008: If you’re going to see Al Green, you’re going to hear that voice, right? And the dude barely, barely sang — for reals. AG has decades on JT, so the reverend got something of a pass. But we can’t give a pass to JT, who built his reputation on giving it his all, regularly, and he didn’t quite do that on Wednesday.