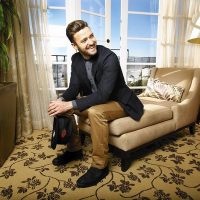 Justin Timberlake knows his music on ‘Inside Llewyn Davis’

Los Angeles Times — «It’s fun to use my singing voice as part of a character», says pop superstar Justin Timberlake, describing how he toned down his vibrato and adjusted his guitar-strumming to portray clean-cut, early ’60s folk singer Jim Berkey in the Coen brothers’ «Inside Llewyn Davis». One of the most delightful scenes in the movie, which opened Friday, involves a spirited recording session for a goofy novelty song called «Please Mr. Kennedy» — a plea to not be drafted into the space race.

Jim sets the pace, instructing his musician buddy Llewyn (Oscar Isaac) on where to jump in and how many «puh-puh» P sounds to insert before the word «please». They then launch into a driving, deadpan version of the nonsensical song while their pal Al Cody (Adam Driver) blurts out «Uh-oh!» and other doo-wop exclamations for a comic top note.

Llewyn, described by the movie’s executive music producer, T Bone Burnett, as «a moody existentialist» folk singer struggling to get by in the ’60s music scene, finds the song appalling, but Jim can’t see a problem with it. «If people want a campy song, Jim’s happy to write it», says Timberlake. «He kind of represents where the world was going. The beatniks of that time looked at music like, ‘This isn’t a career, man, this is art’. But if you look at the music business now — you’re not anything until you’ve made an actual career out of being a musician».

If Timberlake was ever concerned about his own bona fides, he may have overcompensated. The night before he sat down to chat, he’d been anointed both favorite male soul/R&B artist and favorite male pop/rock artist at the American Music Awards. While others in the «Inside Llewyn Davis» cast were promoting the movie with intimate musical performances in New York and L.A., Timberlake was kicking off a world tour around the recent pair of albums he dubbed «The 20/20 Experience»: He played for a capacity crowd of 18,000 at the Staples Center in November and heads to the Forum on Jan. 20.

With a raft of film roles now to his credits, until Joel Coen called he’d never gotten to play a musician. «I think I said yes before he finished the sentence», says Timberlake. «I knew I wanted to mix music and movie-making. To get to do it with the Coen brothers is kind of unbelievable».

Burnett, who’s worked on some of the choicest music-driven movies ever, including the Coens’ «O Brother, Where Art Thou?», doesn’t hesitate to give Timberlake his due. «Justin is a bad man», he asserts, indulging in musician-speak. «He’s a real artist. He’ll get after it. He lays down the law. He’s not an empty-headed pop singer. He’s got a lot going on».

In «Llewyn Davis», Timberlake sings lead in a three-part harmony performance of Hedy West’s «500 Miles», one of the more lyrical and beloved songs of the period. But it’s «Please Mr. Kennedy» that’s getting the most attention this awards season; the song has been submitted for Golden Globe consideration (it’s ineligible for the Academy Awards since it was adapted from existing material).

Timberlake remembers the collaboration (he’s among the credited writers). «Bone and I messed around with some chords and strumming patterns that felt more like the Coasters, with kind of a sunny, stoney groove», he says, bobbing his head. «We played it for Joel and Ethan by speakerphone». The original «Please Mr. Kennedy» (a slower, doo-wop Motown tune recorded by Mickey Woods) was a plea to avoid the Vietnam draft.

«We all thought, let’s make it funny; let’s make it about space exploration instead. Joel and Ethan came up with a lot of the jokes and refined it. When we recorded it, certain things just happened in the moment, and in the editing they went for what was funniest» — including such lines as «I’m 6-foot-2, so perhaps you’ll / tell me I’m too big for the capsule».

The shooting schedule for «Inside Llewyn Davis» required all the songs to be recorded upfront, in a weeklong Manhattan studio session that Timberlake says became a creative bonus. «You’d get in there and play the song the way you thought your character would do it, and that’s how you found the details. There’s a real specificity to the way you play and sing in character».