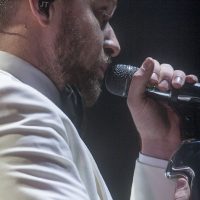 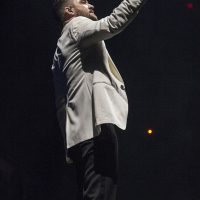 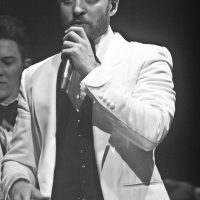 Phoenix New Times — Pop megastar Justin Timberlake made his eagerly awaited return to Phoenix Monday night and quickly proved why the media has paid obsessive attention to him since his Mickey Mouse Club Days. Over the course of his three-hour performance (including a 10-minute intermission), Justin Timberlake made the 20/20 Experience Tour just that — a memorable concert experience with plenty of bang for its buck.

Opening with «Pusher Love Girl», the first track from 20/20 Experience, silhouettes of the brass section appeared on the sides of the stage. The beginning of the song spotlighted Timberlake’s impressive 15-member backing band, The Tennessee Kids. The large band was absolutely necessary to emphasize all the nuances of 20/20 — you know the cool horn part in «Suit & Tie»? It sounds even better live.

Timberlake stood in the shadows for most of «Pusher Love Girl», making him seem like just another member of his huge soul band. During «Gimme What I Don’t Know (I Want)», JT stepped forward and crooned under the spotlight.

Throughout the course of the concert, Timberlake served in a surprising variety of roles. The 20/20 songs showed that he’s a soulster who takes risks, something the album managed as well — a pop star putting out an album with songs that hover around eight minutes is an inherently risky move, but it pays off when he manages to sing and dance the songs in full without breaking a sweat — during a high-energy performance that clocks in just shy of three hours.

It was no small feat; the fact that Timberlake does it every night is impressive.

Following «Gimme» was «Rock Your Body», which found Timberlake taking on yet another role — sexy heartthrob. His boy band past was suddenly quite clear; he could do something as small as glance at a portion of the audience and receive a deafening roar of girlish screams in return. The crowd went wild for this Justified track, which was given a 20/20 twist with an extended intro and some added dramatics.

The setlist featured over 30 songs that were reimagined with a 20/20 influence. FutureSex/LoveSounds» was slowed down and sexed up, picking up with «Like I Love You», which sounded fantastic with the added instrumentation.

The setlist was well laid out, grouping some of JT’s biggest songs in the first portion of the set. «Summer Love» and «Love Stoned» paired well together, even if the later was cut short tp fit into its spot in the tight set — which was unfortunate, but didn’t detract from the set.

Even among all the hits some of the pairings yielded some surprises, like Jay-Z’s «Holy Grail». Timberlake stuck to his parts, sauntering toward the audience for an emotive intro that transitioned into set highlight «Cry Me a River». At the song’s conclusion, the massive platform holding up the band sank down for what would presumably be an encore break.

The band could very well have performed three or so more songs and called it a night, but that wasn’t the case — the show wasn’t even halfway done at this point.

The second portion of the show was quite different, focusing on deep cuts of the 20/20 Experience. The first part dragged a little bit due to the length of the songs, but nevertheless looked and sounded good thanks to the show’s formidable production values. The audience didn’t scream quite as much during songs like «True Blood» or «Tunnel Vision», but things quickly picked up during «Let The Groove In».

Timberlake and a few of his dancers performed on an elevated platform that slowly inched toward the back of the venue, giving everyone an opportunity to get a good view of the singer. He dangled over both ends of the platform, which ended in elevated stairways that extended out into the crowd, to a sea of cell phones and screaming fans.

The platform came to a stop at the opposite end of the venue during «That Girl», and JT walked down to a stationary point near the soundboard. He played an acoustic guitar for an unexpected cover of Elvis Presley’s «Heartbreak Hotel».

Timberlake immediately switched styles for the next song, a tribute to Michael Jackson — «Human Nature». A semi-acoustic «What Goes Around . . . Comes Around» followed, beginning with Timberlake and his guitar and exploding into its pop glory with the full band joining in for JT’s rapid fire vocals toward the end of the song.

Timberlake and the platform made their way back to the front of the venue during «Take Back the Night», which transitioned into the third and final portion of the evening. Once the band returned to the stage, Timberlake performed a couple more covers, as things got funky during «Jungle Boogie» and girls screamed even more for Bel Biv DeVoe’s «Poison».

Timberlake nailed the vocal style and — perhaps best of all — sprinkled some of the song’s original choreography into his performance.

Setlist:
Pusher Love Girl
Gimme What I Don’t Know (I Want)
Rock Your Body
Don’t Hold the Wall
FutureSex/LoveSound
Like I Love You
My Love
TKO
Strawberry Bubblegum
Summer Love
LoveStoned
Until the End of Time
Holy Grail
Cry Me a River

Critic’s Notebook:
Last Night: Justin Timberlake at US Airways Center.
Personal Bias: I was hoping to hear a little *NSYNC or «Dick in a Box», but this was still a damn good show.
The Crowd: Overdressed and full of uncomfortable-looking shoes.
Overheard in the Crowd: «As a Britney fan, I feel guilty for liking this song» during «Cry Me a River».
Random Notebook Dump: «‘Tunnel Vision’ — the first time I’ve seen a topless dancing woman projected onto a huge screen at an arena show».

Justin Timberlake gives Phoenix a show of a lifetime

MENAFN — Arizona State University, Tempe, AZ December 03, 2013 (The State Press, provided by UWIRE, a division of Uloop via Comtex) –Currently on a world tour, Justin Timberlake made his stop in Phoenix last night to a sold out crowd at the US Airways Center. Now in his second month of touring, Timberlake lost track of the city he was in.

«Las Vegas!» he exclaimed when addressing the audience. Timberlake’s last stop before Phoenix was in Vegas, where he played for two consecutive nights.

He immediately realized his mistake by saying, «Wait, where we at? We’re in Phoenix tonight!» before singing his first song of the night, «Pusher Love Girl».

The three-hour concert consisted of 33 songs and ceaseless dancing by Timberlake. The singer incorporated well-known choreography by fans of his earlier hits such as «Rock Your Body» and «Like I Love You», along with new routines for material from the two albums he released this year.

«Phoenix, let me see you shake your ass!» he said to a happy-to-oblige crowd. But Timberlake didn’t only entertain with impeccable singing and dancing. The multitalented musician also played piano and guitar.

His show wasn’t the least bit hackneyed for someone that’s been performing professionally for most of his life.

The personable singer interacted with the audience and was clearly focused on making the night memorable. When a fan offered him a cup of beer, he declined by saying, «I already forgot where I am tonight. I don’t need to get any more drunk».

After some peer pressure from his band and the entire venue chanting, «Chug! Chug! Chug!» he accepted the beer, chugged it on stage, and proceeded to proudly belch into the microphone.

«This crowd is crazy!» he said as he segued into «Drink You Away».

In a commendable effort to be up-close to as many fans as possible, Timberlake’s catwalk ascended above the audience with the singer making his way to each side of the large venue. Complete with frequent stops providing fans with photo ops, he then performed songs at the back of the venue for a far-reaching experience.

With a thrust of the pelvis, he covered Elvis Presley’s «Heartbreak Hotel» and then «Human Nature» by Michael Jackson. During «SexyBack», with a crotch grab and a declaration that «I still run this bitch!», it was obvious he’s reached the same level of stardom as Presley and Jackson.

The closing number of the night, «Mirrors», was met with so much force from the crowd singing along that it induced ear-ringing. The visually stunning components of the concert including a laser light show and Timberlake’s musicianship made «The 20/20 Experience» unforgettable.

Before leaving, Timberlake saluted and blew a kiss to the crowd.

With fans continuing to scream long after he was gone, it was obvious Phoenix loves him, too.

Timberlake tweeted after the concert: «Phoenix!!! That was by far one of the craziest nights we have had on the tour!»