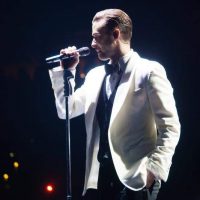 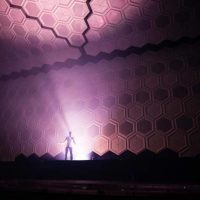 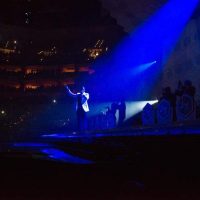 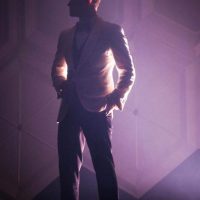 Courier Journal — Justin Timberlake brought a fair amount of flash to the KFC Yum! Center Sunday night for «The 20/20 Experience World Tour», with a state-of-the-art light show, a high-tech stage that traveled from one end of the arena to the other, and a VIP area that featured its own bartenders, tables and chairs.

But it was all secondary to the music, which he delivered with effortless flair and a drop-dead cool. It was a big show in every way, but not gaudy; unlike Beyoncé’s exercise in self idolatry a few nights earlier, Timberlake was low-key and completely at ease. He worked hard at everything except selling himself, instead letting the songs and his performance do the heavy lifting.

At one point he even gave up his microphone and spotlight to a guy named Josh, who then proposed to his girlfriend, Kim. Timberlake then bought them shots and led fans in a toast. «This is for Josh and Kim. Louisville is for lovers, baby!»

So, yeah, Timberlake was as lovable as he was professional, singing more than 30 songs over the course of nearly three hours. He dipped generously into all of his solo albums, including a surprising four from his 2002 solo debut, «Justified», but spent most of his time on «The 20/20 Experience», parts one and two.

Timberlake took his time for the show’s first hour, setting the mood with a set of elegant bedroom funk. Even though his incredibly tight band was also heroically sized, including four singers and a four-piece horn section, it was all about subtlety, especially on slippery versions of «Strawberry Bubblegum», «FutureSex/LoveSound» and «Pusher Love Girl».

Timberlake almost took too much time, letting the first half of the show flirt with shifting from sexy to sleepy, but he ended with a strong «Cry Me A River» that let everyone know the second half was going to catch fire. It did, beginning with a «Only When I Walk Away» and building through «Drink You Away», «Let the Groove Get In», «That Girl» and covers of «Heartbreak Hotel» and Michael Jackson’s «Human Nature».

By the time Timberlake got to his biggest hits — «Suit & Tie», «SexyBack» and «Mirrors» — he had exhausted a sold-out house, further solidified his reputation as one of the world’s most suave men, and helped get a couple engaged. That’s a pretty efficient show for a cold Sunday night in Louisville.