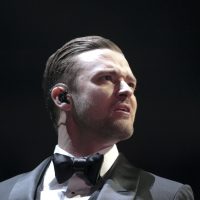 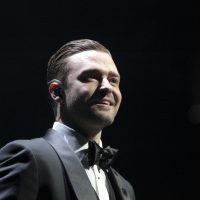 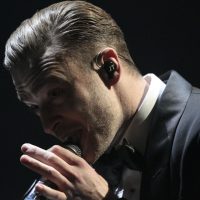 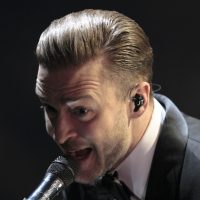 Justin Timberlake blows out the ritz in Indianapolis

Indy Star — Filmmaker Baz Luhrmann aimed for taking a classy presentation to over-the-top extremes in his 2013 adaptation of «The Great Gatsby», but musician Justin Timberlake gets the job done with «The 20/20 Experience» tour that visited Bankers Life Fieldhouse on Wednesday.

Visually, the performance for a packed house of 18,000 attendees centered on posh and elegant wardrobe choices made to match the first single from Timberlake’s «20/20 Experience» album: «Suit & Tie».

He wore two variations on the theme. Up first was a black three-piece suit accented by a bow tie and two-toned shoes. The concert’s second half featured a dark blue jacket over black shirt, black pants and tennis shoes (technically leaving «Suit & Tie» to be performed with no tie at all). Timberlake’s hair was slicked back in the style of Jay Gatsby as portrayed by Leonardo DiCaprio.

Musically, Timberlake and his cast of seemingly dozens of «Tennessee Kids» mined grooves longer and deeper than most bands. They displayed this persistence in evening’s first tune, «Pusher Love Girl», and they hadn’t slipped when «SexyBack» rolled around nearly three hours later.

While Timberlake joked about needing to take a 10-minute intermission at his advanced age of 32, he earned the break. If he returns focus to acting and doesn’t tour again for a decade or more, the «20/20» show delivered more than enough sights and sounds to keep fans buzzing about his musical prowess.

The early segments of the show centered on pop-R&B jams tailored for clubbing — yet Timberlake’s entertaining horn section danced while standing still. The first act closed with metal in mind: «Holy Grail» arrived with bombast worthy of Guns N’ Roses’ «November Rain» and «Cry Me a River» included a headbanging instrumental quote of Led Zeppelin’s «Kashmir».

The show’s second half opened with a menacing twosome of «Only When I Walk Away» and «True Blood». These tunes steamrolled the audience more than engaging it, but Timberlake corrected course with the organic, folksy «Drink You Away» (featuring the former ‘N Sync star on acoustic guitar).

Then came the visual production trick that overshadowed Timberlake’s sprawling projection wall of interlocking hexagons (the best screen since Roger Waters’ «The Wall») and parts of the stage that allowed musicians, instruments and dancers to rise into view or fall out of sight:

A see-through, horizontal catwalk serving as the front of the stage ascended without warning and delivered Timberlake and a handful of dancers to the back of the arena. Hydraulic lifts rolled down the aisles, giving fans a closer glimpse than their tickets implied.

I remember some boy band employing an elevated stage that moved in slow motion above fans at Bankers Life Fieldhouse back when it was known as Conseco Fieldhouse. The «20/20» flying catwalk is a sophisticated, jaw-dropping update.

After visiting Bankers Life Fieldhouse on Tuesday to check out the Pacers-Heat game, Timberlake made the room his own one night later.

In a true host’s gesture, Timberlake led the crowd in a «Happy Birthday» serenade for Roy Hibbert — easy to spot as the 7-foot-2 NBA center hanging out in the arena’s club-level seating. Timberlake also proved that nobody’s perfect, as he introduced Hibbert as a member of the «Indianapolis Pacers».