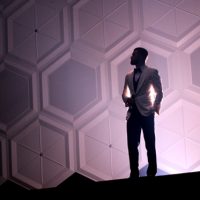 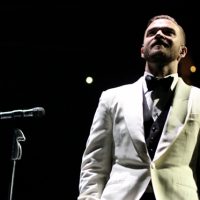 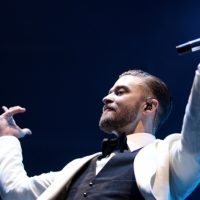 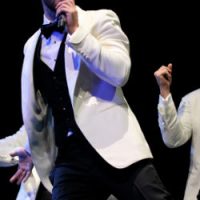 «How we doin’ in the South tonight?» Timberlake teased. Fans were already near hysterics. The second he sauntered onstage Thursday night at Toyota Center, the heavily female crowd erupted into a flood of high-pitched, sore-throat screams that never subsided. It was the loudest, liveliest assembly in recent memory — and one of the most satisfying shows in a long, long time.

Timberlake was backed by a fantastic band, sharp dancers in fedoras and truly awe-inspiring production that included honeycomb LED screens behind and atop the main stage. There was always something flickering or flashing. (Backup singers Erin Stevenson is a Houston native and got a quick shoutout from the boss.)

Much of Timberlake’s appeal is in his contrast. He has inexhaustible energy and charm. But he also never seems to be trying too hard. He’s suave but never aloof. And he effortlessly blends genres (pop to R&B to rap to dance) into something entirely his own.

Most of the songs were punched up considerably from their studio versions. The first set of tunes — from «Pusher Love Girl» and «Rock Your Body» through «FutureSex/LoveSound» and «My Love» — would each be individual highlights for a lesser performer. In Timberlake’s hands, they were mere warmups for the rest of the nearly three-hour show.

Every moment was intricately choreographed, from hand gestures to harmonies. He dances hard, sings even harder but never seems to break a sweat. And he never left the stage. There was just one costume change during a mid-show break.

Timberlake led the crowd through frenetic versions of «Summer Love» and «LoveStoned» but also pulled back during more intimate interludes within songs. He pounded on a piano during «Until the End of Time». He put an extra dose of swagger on «Until the End of Time», leading the crowd through a chorus of «oh-whoa-whoas». And a mashup of «Holy Grail» and «Cry Me a River» was nothing less than electric.

He diversified during the show’s equally breakneck second half, incorporating reggae rhythms («Only When I Walk Away»), a shuffling, macabre showmanship («True Blood») and lively singalongs («Señorita»). He also played to the cheap seats. The stage’s expanse staircase detached and slowly rolled to the back of the venue as Timberlake interacted with his band, dancers and screaming fans.

Timberlake covered Elvis Presley («Heartbreak Hotel»), Michael Jackson («Human Nature»), Kool & the Gang («Jungle Boogie») and Bell Biv Devoe («Poison»), complete with ’90s dance moves. He danced toward the end of the night with a pair of his biggest hits, «Suit & Tie» and «SexyBack», all swag and ego and charm. He closed, however, with «Mirrors», an unexpectedly heartfelt choice after so much flash and ferociousness. Every hand was in the air, every female seemed to still be screaming (and more than a few guys, too). Talk about the 2o/20 experience.