La lista de canciones del concierto: Gimme What I Don’t Know (I Want), Rock Your Body, Don’t Hold The Wall, FutureSex/LoveSound, Like I Love You, My Love, TKO, Strawberry Bubblegum, Summer Love, LoveStoned, Until the End of Time, Holy Grail, Cry Me a River, Intermission, Only When I Walk Away, True Blood, Drink You Away, Tunnel Vision, Senorita, Let the Groove Get In, That Girl, Heartbreak Hotel (Elvis Presley), Not A Bad Thing, Human Nature, Comes Around, Cabaret, Intermission:, Take Back the Night, Murder, Poison, Suit & Tie, Sexy Back, Mirrors. 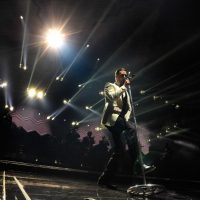 NYDailyNews.com — Justin Timberlake continued a long, sleek run through the city on Wednesday, giving a smooth and flirty performance at Barclays Center that marked the star’s fourth major appearance in town in just six months.

In May, J.T. debuted a slick soul revue at Roseland, introducing material off the first of two «20/20 Experience» CDs released this year. In July, he headlined Yankee Stadium in an R&B/hip-hop bromance act with Jay-Z. August saw him twirling through a 15-minute career retrospective at Barclays for the VMAs, a showcase that would have been that show’s highlight had Miley not twerked all the attention to herself.

JT’s latest Barclays display kicked off a full U.S. tour that arrives at the Izod Center on Saturday before whipping through 69 dates snaking along until next July. The toil behind all this stands in stark and telling contrast to the essential vibe of Timberlake’s performance Wednesday.

It was a study in suave ease.

Starting with «Pusher Love Girl», Timberlake exuded a sweatless charm. His falsetto spiraled aloft without strain, tracing a balletic grace. His dance moves maintained an equally light gait. To suit the stylish night, Tom Ford designed the outfits for Timberlake and his band. That meant a gentlemanly white dinner jacket for the star and formal black suits for the musicians. Even the three female backup dancers sported vests, jackets and ties. The star himself wore his hair slicked back to affect a ’30s elegance.

Likewise, he kept his set clean and simple, at least by current standards. The floor had an art deco formality. It even included an intermission, like a play.

The approach wasn’t without its downside. Timberlake’s display was untroubled and pleasing to a fault. In soul music — his aspirational style — pain holds great sway.

It’s about exorcizing difficult emotions as much as overcoming them. But JT doesn’t delve deep into the darker stuff. He flits happily across the surface of his songs.

Luckily, the melodies and beats of his pieces have such finesse, and such fluidity, you needn’t overthink what’s missing. A song like «Rock Your Body» may clearly plunder the Michael Jackson songbook, but it does so with its own melodic twists, as well as with a wink.

His take on «My Love» finessed its way through two sections: first as a piano ballad with a vocal of pure cream, then with a staggered riff that shimmied across the arena. JT sustained just as much charm in a gooier ballad like «Strawberry Bubblegum».

The star retained the same 13-piece band he’s been using all year. Their bumping horn section give the music a sharp edge, while the flickering guitar riffs straddled harder R&B and rock.

The length of the songs on his recent albums makes them ripe for live performance. They’ve got grooves made for elaboration. The band deepened the music’s beat while the star vamped fleetly around them. The songs off the new album, a sequel to the first «20/20 Experience», aren’t as compelling as those on its predecessor. But he cherry- picked the better ones, like «TKO», and, live, they sounded fuller. They also gave him a chance to, briefly, feign having a dark side.

In key moments, Timberlake worked his mike stand like a dance partner — as both sensual foil and sensitive reflection. His six backup dancers likewise skipped rather than stomped, referencing moves of a more elevated era. The star’s raps had their own gentility, eschewing an ounce of the crude.

Obviously, all this meant the show couldn’t make a claim on grit. It didn’t need to. Using the language of pure pop, Timberlake gave the age old song-and-dance-man routine his own sweet update.