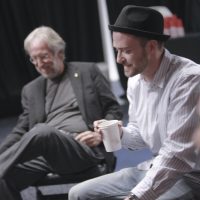 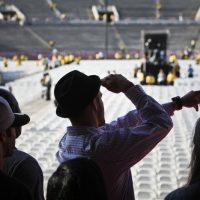 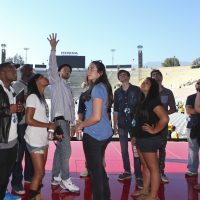 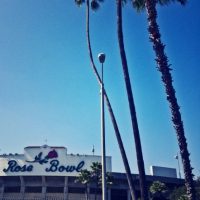 Witnessing the hold that music can take on one’s inner being, whether it is as a consoling embrace, an intimate romance, or a driving force, never ceases to inspire. Music has that ineffable ability to penetrate even the most callous skin and to ignite a revolution from within. This quality imbues not only the creation of one’s music, but is also intrinsic to one’s life and purpose.

Few music zealots are fortunate enough to actively witness these exceptional qualities in an academic setting. Even fewer are handed the chance to dissect and learn the craft directly from the industry’s leading artists, engineers, and producers. On July 28, 2013, ten GRAMMY U members were given this opportunity to gain personal insights and pertinent industry tips from one of today’s most prominent artists and to experience the inner workings behind a heart-pounding nationwide stadium tour when Justin Timberlake linked up with the students to share a gracious portion of his show day at Pasadena’s Rose Bowl.

Timberlake’s personal team, more frequently referred to as «family», met GRAMMY U at the entrance to the Rose Bowl for an exclusive tour. Sonia Muckle, Timberlake’s publicist, began with an explanation of her role within Timberlake’s management, and highlighted the extraordinary logistics and talent that make up the show. Renee Earnest, Timberlake’s affable operational manager and former grade school teacher then led the group through the intricacies of the venue’s backstage production and introduced the students to each member of Timberlake’s crew. The students proceeded to meet an even wider variety of Timberlake’s team– including his manager Johnny Wright, tour manager Andre Person, co-producer/co-songwriter James Fauntleroy, security staff, stage techs, lighting crew, band members and creative partners – and many other individuals serving an essential role in the production of Timberlake and Jay Z’s show. Earnest and Muckle led the assembly even deeper into the venue, pointing out and further explaining the many steps that go into producing a stadium tour that spans twelve cities and fourteen shows. Neil Portnow, The President/CEO of The Recording Academy, also joined in to lend his support and insights.

As the students spoke with Earnest and Muckle, a very familiar looking man in a trademark fedora slipped unobtrusively into the room. Without any formal introduction, Timberlake began the kind of intimate meeting that most young music makers can only dream about. He greeted each student, asked their names, then asked that they go around the room and share their current collegiate major and which fields of the industry they aspire to pursue. As each person spoke of their specific goals, Timberlake enthusiastically chimed in with comments and also graciously answered the students’ questions about the details of his own musical journey and personal road to success. Students asked about his early musical influences, the intricacies of his live performance, and the creation of his new album, «The 20/20 Experience». Through the depth in which he answered each question and the humble relatability he conveyed, Timberlake’s desire to assist those coming along behind him and nurture their dreams clearly shone through.

As the time approached for the venue’s doors to open to the general public, Timberlake asked the group to join him on a walk. He led them to the center of the massive red stage and invited the group to gaze out on the unending rows of seats that would shortly be filled with over 70,000 people. «This is what it looks like», Timberlake said with a smile.

Through his time and attention to each individual and his true interest in each student’s musical passions, Timberlake made clear his willingness to foster the next generation of music leaders. It did not take long after the group’s introduction to fully understand that one of the driving forces for Timberlake and his team was utilizing their positions in music as a tool to give back. Not only did they do just that; they provided the GRAMMY U students in attendance with an absolutely unforgettable experience.