«Legends Of The Summer», BC Place Stadium, Vancouver +24 imágenes 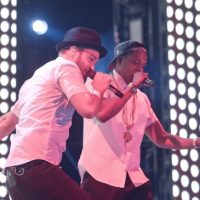 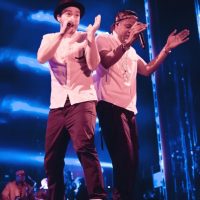 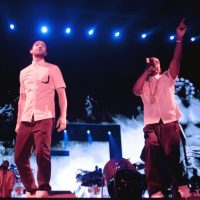 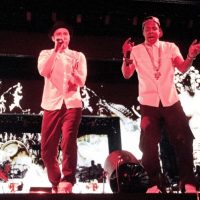 Over 40,000 fans filled the big sports bowl downtown to see Jay Z and Justin Timberlake on one of the busiest nights Vancouver’s core had seen since the 2010 Olympic Winter Games.

If the concert had not lived up to its «Legends of the Summer» billing, a combination of Celebration of Light fireworks filling Vancouver’s beaches and of tens of thousands of music fans coming in and out of the city centre would have still made July 31, 2013 — yet another sun-drenched day marking the end of the first rainless calendar month in Vancouver’s history — the stuff of legends.

But Jay Z and Timberlake were in a league of their own Wednesday night at BC Place, where for the first time the stadium hosted an open-roof concert.

The Legends of the Summer tour stop in Vancouver, signalling the halfway point in the the two Js overblown 14-date North American jaunt, had all the flair of a self-congratulatory victory lap — more «New York Yankees ego trip» than «Brooklyn Dodgers underdog feel-good story».

And for good reason.

Both Js are arguably at the top of their game, at least business-wise.

Jay Z recently sat at top of the Billboard charts in spite of being denied a million presale count part of a deal with Samsung, and has been spending a small nation’s entire GDP on self-aggrandizing projects including his latest album Magna Carta Holy Grail, an HBO «performance art» special entitled Picasso Baby airing Aug. 2, not to mention dropping mucho dolla’ bills on his own «first family», wife Beyonce and trademarked baby Blue.

Timberlake is still reaping the rewards of The 20/20 Experience — a multi-platinum album that came seven long years after his landmark Future Sex/Love Sounds — as well as a TV/film/Internet career that includes regular appearances on Saturday Night Live, and trying to keep old leaky social web boat MySpace afloat.

So with that in mind the Legends event almost felt like a distraction — a kind of surreal, disproportionate 2.5 hours interlude meant to celebrate iconic personalities more than music.

Still, once a stage beast like Jay Z got going and a pop icon like Timberlake revved his swag up, the rest was pretty much history.

The stuff of legends? Not exactly, but close enough.

Tour opener DJ Cassidy was still spinning tunes as the sun disappeared below the horizon, stringing along some of Kanye West’s and Kendrick Lamar’s best cuts at the 9 o’clock mark, the crowd itching for a party that was still more than a few minutes away, the giant glossy red stage beckoning latecomers to their seats.

Close to an hour after its designated start time, the concert finally took off with Jay Z’s ode to being a trailblazer and redefining the rules of the game, Holy Grail, JT playing backup on a stage that, with its big band staircase setup, seemed almost designed more for him than Jay Z.

For the first third of what was to be a marathon evening featuring over 30 songs, the two Js traded numbers at breakneck speed, Timberlake getting his own groove on with Rock Your Body, the Jackson 5’s I Want You Back, Señorita and My Love.

Jay Z replied intermittently with his personal anthem Izzo (H.O.V.A.), Excuse Me Miss and a massive On To The Next One.

The stage was half the reason to be there, at first adorned in Renaissance art, then sparkling like a retro disco dance floor, later shape shifting into slithering snakes. (Too bad a big chunk of the left screen temporarily died halfway through Timberlake’s impressive My Love.)

The sound was sharp, and BC Place has shown it can hold its own since its revamp in 2011.

It was party mode throughout, but it was really Justin’s set to own early on, Jay Z acting as the wise mentor to a younger protege with too much respect for his master to steal the show, which made it feel like neither really wanted to fully step up to the plate and fully own the stadium.

The solo segments were truer to form, Jay Z pumping out 99 Problems and Hard Knock Life with his usual overblown charisma, but it was JT’s solo turn that really had the most soul, from Pusher Girl to LoveStoned and an epic Cry Me A River, Timberlake driving every girl in the house wild.

Even the overlong material from the interminable 20/20 Experience felt infused with new life (Take Back The Night), Timberlake using every drop of his star power and the magnificent band backing him up to amp things up.

Jay Z’s Holy Grail stuff felt rather clunky. Late set ode to designer Tom Ford was a flatliner compared to a New York-centric Empire State of Mind, and 15 minutes past the 11 o’clock mark it felt like the two Js were rushing to the finish line, a seemingly tired Jay Z having delivered only half of crowd favourite N—-s In Paris, a song he performed a record-breaking 11 times in a row during his last Vancouver appearance at Rogers Arena with Kanye West.

There would still be time for an encore that didn’t even require an applause break, the pair blazing through JT classic SexyBack, (mercifully trimmed) new single Suit & Tie, and closer Young Forever, which finally drew the last drop of sweat out of everyone in attendance.