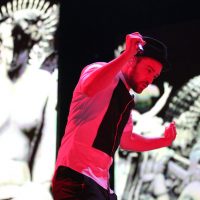 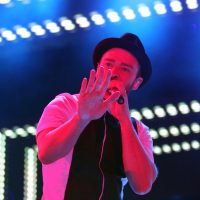 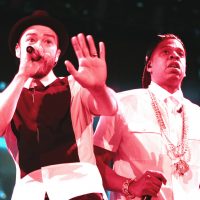 A little after 9 p.m., Justin Timberlake and Jay Z opened their show with an impressive version of Hov’s «Holy Grail» featuring JT. The stage and complimentary digital display was immaculate and elegant, setting the tone for what would prove to be a wonderful performance from both men.

Justin Timberlake and Jay Z are masters of their craft. Every breath choreographed, every collaboration planned. From JT’s fist-up pose synching with Jay Z’s «beat them charges like Rocky» line in «H to the Izzo», to the drummer’s Mitchell & Ness tank, every ounce of this show seemed predetermined for greatness.

They briefly covered the Jackson 5, lyric-checked Boyz II Men, and even offered a hardly noticeable flash of Yeezus. Hov and JT knew exactly what they were doing, opening the show with a collaborative effort on «Holy Grail» before launching into a «Best Of» performance that saw an hour go by before Timberlake even touched his latest material. We were treated to «Big Pimpin'» and «Senorita» and «99 Problems» and «Dirt Off My Shoulder» before we even thought about touching «Tom Ford» and «Mirrors».

Honestly, JT’s «Cry Me a River» might be the most emphatic live performance of a generation. Seriously. It was, really, his first post-*NSYNC hit, written after he was scorned by a Mickey Mouse Club lover who happened to present herself to the world as an untouched, everygirl. Now, it’s one of the most successful, rousing «f*** you» anthems that Millennials have to pull from. And it’s even more enjoyable and relatable when you see it live, coupled with JT’s double middle fingers at the end.

But then, just when you thought that these two men—hyper aware of their commercial appeal, but still in touch with their artistic sensibility—would offer an untouchable, breath-taking performance, Justin Timberlake came out on stage about two-thirds of the way through the show and sang, «Start spreading the news.»..

What followed was a brief cover of Frank Sinatra’s version of «New York, New York». Then, after a few lines, Jay Z came out on stage and played «Empire State of Mind» as the Citizens Bank Park crowd erupted. In the same outfield that was home to A-Rod’s go-ahead double and Posada’s Game 4-sealing single, Timberlake came out and played what is, basically, the Yankees theme song before Jay Z came out and performed the anthem of the Bronx Bombers’ 2009 championship run through the City of Brotherly Love. It was blasphemy. I looked around, astonished, as everyone sang along and bobbed their heads to the song that, just a few years earlier, ushered in what is proving to be the official death of the current version of the Philadelphia Phillies.

Maybe I’m holding a grudge. Maybe I’m shortsighted and shallow and vengeful and classless. But, honestly, f*** that song. I hate the tune and the lyrics and I don’t like hearing people sing it, especialy while they’re wearing Phillies hats and swaying to-and-fro smack dab in the middle of the the Citizens Bank Park foul poles. Back in the fall of 2009, you couldn’t breathe without hearing half a verse of Alicia Keys’ chorus on that track. Now, just a handful of years later, we’re expected to sing along with Jay Z as if we’re celebrating another Yankees banner?! It just feels wrong.

It’s certainly possible that I had my guard down and my hopes up, but when JT and Hov launched into the Yankees anthem, there wasn’t a boo to be heard in South Philly. And, as the Phils rest 19.5 games out of first place, it seems that booing a Yankees theme song from the ’09 World Series might be have been the last feat of strength that we could muster before packing it in for a season.

The Legends of Summer Tour was, likely, well worth the money, no matter what you paid for your tickets. Jay Z’s diction and authorative annunciation, JT’s swoon-worthy crooning and infectious dancing. If you weren’t at CBP on Tuesday, then you missed the climax of the summer of 2013 in Philly. It’s just a shame that Phils fans are so apathetic that they couldn’t even offer a half-hearted, disapproving reaction to the song that kept them up at night just a few years ago.

Or, maybe, I should just let it go.

For a smidge under two and a half hours on a balmy Tuesday at Citizens Bank Park, Jay Z and Justin Timberlake’s grandly-staged, tag teamed «Legends of the Summer» show did exactly what I thought it might not pull off: enliven each man’s older hits for the sake of freshness and make the weaker songs from their newest albums mightier.

The largest part of the show’s success came down to two things, the first being its pacing. There was not a moment wasted, what with the liberal use of its side stages (JT popped up out of nowhere splashily singing a jazzy cover of Sinatra’s «New York, New York» before Jay Z took to a snazzy «Empire State of Mind») and the trap door at stage center that allowed one man to disappear from view while the other appeared (as the shouts of «Hova» wafted in the breeze at the end of one song, up popped JT with the next) to start the next song.

The second thing that made the show a dazzler was teamwork — the genuine camaraderie felt between the Js — with each man insinuating himself into the other’s business. Even Z’s Watch the Throne shows with Kanye West didn’t have that aspect of male bonding/artist co-dependence. Each made the other’s songs better from the start, like when Timberlake crooned the hook to Jay-Z’s new «Holy Grail» track, Jay’s «uhuh-uhs through Justin’s bluesy «Heart of the City (Ain’t No Love)» or the mini-metal-moment when JT strapped on an electric guitar and pushed Z’s «99 Problems» harder and higher with licks form Aerosmith’s «Walk This Way», and a dedication (from Hova) to Phillies manager, Charlie Manuel, to boot.

A big part of their collaboration’s winning ways came down to Timberlake’s tight-ass band, the Tennessee Kids. This team — horns, singers and all — backed up both gents and followed each man’s lead so sympathetically and ever-so closely, they could have been house detectives. Shout out to one of the two drummers wearing that Mitchell & Ness tank top.

As far as their newest albums go, JT’s The 20/20 Experience and Jay Z’s Magna Carta Holy Grail have too many weak moments for my liking. Yet, in this staged presentation Timberlake’s Technicolor epic «Mirrors», and Z’s sparse, style-soliloquy «Tom Ford», took on greater force, the latter tune, in particular, suddenly sounded more about gluttony and greed («Piss Bordeaux and Burgundies, flush out a Riesling… Spent all my Euros on tuxes and weird clothes … I party with weirdoes, yeah Hov, yeah Hov») and less about luxury dry goods.

If we need to name a winner, it’s tough. Jay Z’s songs are more memorable than JT’s, hands down, especially and thankfully considering that Z’s hits such as «Izzo (H.O.V.A.)», and «Jigga What, Jigga Who» were reconfigured and made minimal. Honestly, as much as I love Jay Z, if I had to hear that same hits set he’s been doing for the last several tours without fresh adornment, I’d scream. With Timberlake though, there’s that croon, pop’s sultriest white-boy soul sound wrapped around the jittery disco of «Rock Your Body», a halting «What Goes Around… Comes Around», a fun cover of the Jackson 5’s «I Want You Back», and a grand, achy-break-y-but-powerful take on his own «Cry Me a River». Even when a song wasn’t great («Senorita») that voice and his keyboard playing hammer down the nails every time.

They closed out the show with their sprightly grooving «Suit & Tie» duet — the first time the pair donned suits the entire night — and the lighters-up ballad «Young Forever» (not my favorite, but a crowd pleasing finale) with the crowd wanting more. Fans of Jay Z will probably get something of a chance at that when his Made in America 2, with Mrs. Carter Beyonce on board (Aug. 31-Sep. 1) while Timberlake aficionados will have to wait for Nov. 10 for 20/20 Experience Part 2 and his solo show to hit Wells Fargo Center, Nov. 10. (Tickets for that go on sale Aug. 23.)