To everyone that came out to the #LEGENDSOFTHESUMMER with @S_C_ and myself I say THANK YOU!! What a tour! What a Summer!! 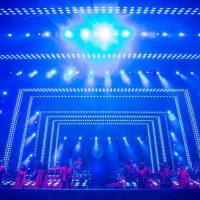 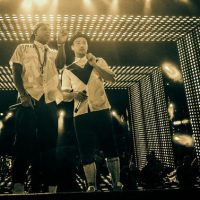 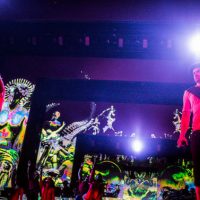 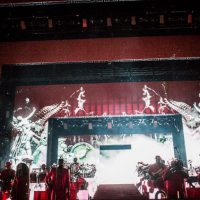 For a second-rate basketball team, there were a disproportionate number of Brooklyn Nets jerseys at Sun Life Stadium last night. Well, until you remember that Jay Z, the co-headliner of the evening’s Legends of the Summer tour, is a minority owner of that NBA team.

His partner-in-rhyme Justin Timberlake also owns a stake of an pro b-ball team, the Memphis Grizzlies, even if no one was wearing that team’s merchandise. Still, it all makes you wonder if their 12-city stadium tour might have been a scouting trip for the duo to purchase an NFL squad.

Because, if the rumors are true and they were both pocketing a million dollars a show each, they could soon afford a team. So why not buy Sun Life’s main tenant, the Miami Dolphins?

In their two-hour-plus set, Justin Timberlake and Jay Z brought the crowd more excitement than the stadium has seen in years, delivering more big hits than a full season of the Dolphins’ defense.

Twenty years ago, JT and Jay would have been an unlikely match, The Mouseketeer and the crack slinger. But on this evening, they were equals. From the first song, «Holy Grail», Timberlake took the left of the stage and Jay Z the right. They stood under screens displaying Greco-Roman sculptures. And they shared a massive backing band, set up in three tiers. There were no breaks between sets. A Jay Z song would segue into a Timberlake number.

Now, Hova is known to be musically promiscuous, willing to collaborate with anybody. He has toured and recorded with partners such as Linkin Park, R. Kelly, and Kanye West, but there was more of a seamless harmony between Jay and JT than those previous mash-ups. If one of Justin’s songs needed Jay Z’s hype, Mr. Carter was right there. If «99 Problems» needed the guitar lick from Aerosmith’s «Walk This Way», Timberlake was ready to show off his Guitar Hero skills.

It was said of Fred Astaire and Ginger Rogers that he gave her class and she gave him sex. The Jay and JT partnership also produces a similar mutually beneficial symbiosis. But it wasn’t until Justin Timberlake went into a rendition of Frank Sinatra’s version of «New York New York» to introduce «Empire State of Mind» that it became evident of who their cultural ancestors are, Sinatra and Sammy Davis Jr.

Timberlake, like Sammy, is the man of a thousand talents. He can hit the high notes. He can show off the dance moves that he learned in ‘NSync. And as mentioned, he can strum a few chords on guitar and even play the keys, as he did for «Senorita» and «What Goes Around… Comes Around».

Meanwhile, Jay Z has Sinatra’s tough-guy charisma. He is able to charm people into breaking the rules, even sweet talking the security, saying that since this was a real party, to let the people dance in the aisles, «just for tonight». This 21st-century Chairman of the Board even has the famous friends, his very own Rat Pack, as evidenced by an open-shirted Rick Ross, showing off his tattooed tits, walking across the stage for his guest spot on «FuckWithMeYouKnowIGotIt».

Throughout, the show was impeccably staged, fast, and tight. And last night at least, Justin Timberlake and Jay Z weren’t wrong when they claimed to «Run This Town». So Dolphin fans can only hope this duo made all the right moves to buy up a football team that has become known for making all the wrong moves.

And if they do, let’s hope Jay and JT will make certain to demand public transportation to Sun Life Stadium. Because, good God, it is an unholy terror driving in and out of that place.

Hip-hop master Jay Z and pop star Justin Timberlake are each likely having one of the best years of their careers. Both had blockbuster album releases (Magna Carta Holy Grail and The 20/20 Experience, respectively) that have topped the charts, and the two decided to venture on the Legends of the Summer stadium tour with just 14 shows across the U.S. and Canada. After already playing to hundreds of thousands of adoring fans, the pair closed their tour in Miami on Friday night with a conquering performance at Sun Life Stadium that will further cement their legacy in pop and hip hop music.

The Legends of the Summer show runs at a lengthy two and a half hours with nearly 40 songs (some full-length, others abbreviated). Friday night, the show felt exceptionally well-paced. The transitions were seamless between collaborations and solo efforts.

While imposing and colossal, the flashy stage seemed to be the appropriate size for two titans of music. Their likenesses were super-sized on massive video screens, and they carried themselves as if they were truly 10 stories tall. And while it would seem big names would clash, their desire to bring out the best in each other added a surreal element to the mix. It’s hard to grasp the idea that two of the biggest stars in music can come together to create a cohesive (and spectacular) show that does equal justice to both. But if anyone could pull it off, it would be these two.

They really knocked it out of the park when they shared the stage; the two have undeniable chemistry and fed off each other so well that their contributions to each other’s songs felt natural and almost always welcome. Pairings of «I Just Wanna Love You (Give It 2 Me)» and «Rock Your Body», as well as «Izzo (H.O.V.A.)» and Jackson Five’s «I Want You Back» went over exceedingly well because they play off each other’s personalities. The two also bring out the best of their new material like «Holy Grail» and «Suit & Tie» (both of which they collaborated on) with fantastic results.

Timberlake is as confident and charismatic a performer as he’s ever been. He glides effortlessly across the stage as he belts out his tunes with razor sharp precision. With a sway of his hips, a smirk and a sly laugh, he could win over almost any naysayer just on his showmanship alone. While his acting abilities on the silver screen can incite divergent opinions, there’s no doubt he injects the emotion necessary to make his songs come to life. He successfully plays the part of the scornful ex-lover in songs like «What Goes Around…Comes Around» and «Cry Me A River» just as well as he does a hopeless romantic with groove songs like «Like I Love You» and «My Love». While some songs from his latest album are harder sells, such as «Pusher Love Girl», which seemed to go on far longer than the record’s eight minute-plus length, he brought his all to «Mirrors» and «Tunnel Vision».

Jay Z’s rich catalog of 20 years of critically acclaimed rap songs must have come in handy when it came time to curate his portion of the set list, as there was little filler with his choice of music. Many of the rapper’s well-loved hits are represented, from the arrogant playboy in «Big Pimpin» to the man from the streets in «Hard Knock Life (Ghetto Anthem)»

While his newer songs don’t require the same level of rap dexterity as his early catalog, he showed he still has those ferocious rapping skills when he performed the difficult «Jigga What, Jigga Who» with aplomb. He also brings the necessary gravitas to songs like «U Don’t Know» and «99 Problems», exceptionally catchy tunes that also grapple with the difficulty of life as an African-American.

While the two brought enough star wattage to light up a city, they also brought on two surprise appearances. Rapper Rick Ross shared the stage with Jay Z and bared much of his rotund, heavily-tattooed figure while performing «F*ckWithMeYouKnowIGotIt» from Jay’s latest album. But it was mega-producer Timbaland who electrified the crowd when he appeared to contribute his part to Justin Timberlake’s smash hit «SexyBack».

Perhaps the most enduring moment of the night was when the duo asked the tens of thousands of fans to light up the stadium with their cellphones and dedicated Jay Z’s «Young Forever», which cover’s the classic 80’s «Forever Young», to Trayvon Martin. While this ritual has been performed at nearly every stop on their tour, it had particular resonance here because of the relationship of the case to many South Floridians (in physical and emotional terms).