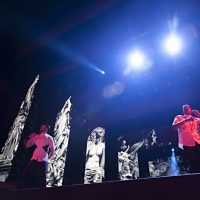 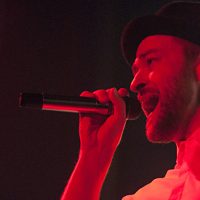 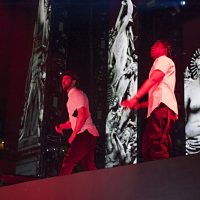 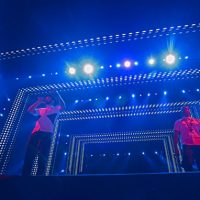 Left to their own individual devices, Justin Timberlake and Jay Z are certainly formidable performers.

But in tandem — as they were on Tuesday night, Aug. 6, when their Legends of the Summer Stadium Tour hit Ford Field — the two equaled more than the sum of their parts. In a big way.

The revue-style two-hour and 20-minute show was consistently exciting from start to finish, staged with slick precision from the subtle choreography to the flow of the set list and an arresting light show that was visually impactful even at the top and back of the stadium. But the duo also did without many of the usual totems of big pop stage extravaganzas; there were no pyrotechnics, no second stage, no ramps extending onto the Ford Field floor — not even confetti. Nor were there dancers, save for the members of the 18-piece band and, of course, the tens of thousands who packed the house and sang along to everything from Timberlake’s pop-soul hits to Jay Z’s iconic rap tracks.

The weight of the show was instead carried, expertly, by the two performers and their abundant song catalogs. And it was a genuinely collaborative affair as Timberlake and Jay Z ping-ponged between each others’ material, ripping through more than three dozen songs over the course of the show, frequently guesting on each other’s tunes and clearly having a great time having someone to share the load.

They quickly established the tone for the night by emerging on opposite sides of the stage for «Holy Grail», the Timberlake-featuring title track from Jay Z’s latest album. As the rapper declared, «Let’s turn this whole stadium into a small party!» the duo slid into a mash-up of Timbaland’s «Give It To Me» and then Timberlake’s «Rock Your Body» before a bit of the Jackson 5’s «I Want You Back» led into Jay Z’s «Izzo (H.O.V.A.)», with Timberlake orchestrating the sea of waving arms.

Timberlake, on his first tour in seven years, was clearly the more energized of the pair, in constant motion and mugging deadpan for Jay Z, the band and the crowd as well as playing guitar on the Jay Z songs «U Don’t Know» and «99 Problems» and providing piano stabs during «On to the Next One». His own mini-set featured powerhouse performances of «Pusher Love Girl», «Summer Love», «Cry Me a River», «Take Back the Night» and «What Goes Around … Comes Around», and he framed Jay Z’s «Empire State of Mind» by crooning the theme form «New York, New York».

The rapper, meanwhile, was his usual steady and powerful self, prowling while Timberlake pranced and delivering a generous sampling of his greatest hits, including «Jigga What, Jigga Who», «Public Service Announcement», «Hard Knock Life (Ghetto Anthem)», «Dirt Off Your Shoulder», «N——- in Paris», «Run This Town» and «Encore». Timberlake finished the main set with a high-octane «SexyBack», and he and Jay Z emerged for the encores in black-jacketed finery, toasting the Ford Field crowd with champagne before loping through «Suit & Tie» — the new Timberlake track that features Jay Z — and closing with the rapper’s anthemic «Young Forever», the stadium lit up by the crowd’s cell phones.

Superstars frequently team up for shared tours, but this was truly a case of performers sharing the stage, resulting in a unique and special evening and making a strong case for the best concert of the year so far in these parts.

With Timberlake laying down smooth dance moves alongside Jay Z’s seasoned laid-back swagger, the superstar duo lived up to one of the summer’s premier concert billings for a roaring, engaged audience of more than 40,000.

In a show that was intricately orchestrated but still loose enough to give the whole thing a freewheeling mood, the nearly 2½-hour set was a marathon party, a rat-a-tat-tat of hits and high energy.

Detroit was one of just a dozen cities to luck out on one the duo’s Legends of the Summer tour stops, and the football stadium was bristling with buzz well before the two appeared onstage at about 9:20 p.m. The last time we’d seen each of these guys in a stadium-sized setting here, it was across the street at Comerica Park: Timberlake in 2001 with ‘N Sync, and Jay Z in 2010 when he co-headlined with Eminem.

They opened Tuesday with their new collaboration «Holy Grail», appearing astride risers at opposite ends of the mammoth, lavish stage before making their way to the middle for the first of many side-by-side musical moments.

From there it was on through a rapid-fire selection of tunes to rev up the party: Timberlake’s «Rock Your Body», a sprightly «I Want You Back» in its natural pairing with Jay Z’s «Izzo (H.O.V.A.)», Timberlake’s «Senorita», Jay’s «On to the Next One».

It was all gloriously bombastic, the kind of night when having two drummers (and a percussionist), three keyboardists and a pair of video screens big enough to beam images to Canada all made perfect sense. And anyway, it wasn’t all just for show: The 14-piece band — complete with a feisty horn section and topped with four stylish backup singers — was tight, dense and nimble enough to serve both performers well.

Sure, this tour is a gimmick of sorts, teaming up two of the era’s biggest stars — and periodic studio collaborators — for a high-powered festival of hip-hop, R&B and pop. But Tuesday night, it was a gimmick that really worked: Jay Z and JT looked liked they’d been doing this together for years, sporting an affable chemistry as they played to one another and handed off the mic between comings and goings.

They’d arrived at Ford Field in dichotomous career spots: Jay Z the veteran rap kingpin on cruise control, Timberlake the comeback kid who seems to have remembered that he really digs this whole music thing. The latter was the harder working performer of the night, jumping from keyboard to piano to acoustic guitar when he wasn’t serving up his Michael Jackson-inspired maneuvers up front (and calling out to Detroit «Rock City» all night).

That certainly doesn’t mean Jay Z was second fiddle, and it was his litany of hits («99 Problems», «Hard Knock Life», the stacatto-rapped «Jigga What, Jigga Who» and «Big Pimpin'») that consistently drove the show. It’s old news at this point that the 43-year-old emcee has singlehandedly elevated the standards for live hip-hop in a big-stage production. But it’s still impressive to see it in action, and he prowled the Ford Field stage Tuesday night a larger-than-life showman, fully occupying his moment.

The set never dwelled too long in one musical place. The night’s most straightforward stretch came with Timberlake’s relatively lengthy midshow run of lush-grooved pop («Summer Love», «What Goes Around … Comes Around»), with «Cry Me a River» intensifying into a twin-guitar climax.

The only real awkward moment came with Timberlake’s rickety cover of «New York New York», buttressing Jay’s «Empire State of Mind». It was a lone clunker in a potent homestretch as the show began to hit its climatic run.

By the time they got to the encore, clad in tux jackets and hoisting glasses of champagne as they ran through a solid «Suit & Tie» and even better «Young Forever», it was clear they’d accomplished something worth toasting themselves for. And don’t be suprised if 2013 isn’t the last time you see them doing it.

Colossal is the word that comes to mind to describe Jay Z and Justin Timberlake’s «Legends of the Summer» tour, which played to a near-capacity crowd of more than 42,000 fans at Ford Field Tuesday night.

The pairing of the two modern titans unfolded on a massive stage that was framed like a museum piece, a nod to Jay’s burgeoning interest in modern art. And red was the theme of the night, giving Taylor Swift’s recent Ford Field show a run for its money when it came to its subjects bathing in the color of passion.

One question lingered at the onset of the evening: What, exactly, brought these two megastars together? Is it friendship, artistic camaraderie, a spiritual kinship, or was it simply a business proposition? At the end of the night, after the two artists’ 2-hour, 20-minute hit parade unfolded on stage, it hardly mattered.

The show owed a debt of gratitude to Jay Z’s 2011 Watch the Throne pairing with Kanye West. Like that outing, the two headliners shared a good portion of stage time together, rather than splitting stage duties down the middle. In Kanye West, Jay Z had a partner with whom he shared an inseparable bond; the two artists have worked closely together for years and are closely linked with one another. Jay Z and Timberlake don’t have that same familiarity, and they had to work to fill those gaps and round out each other’s differences. Jay Z is the cool former street hustler, Timberlake the eager-to-please showman and former Mouseketeer. Jay Z prefers pacing back and forth on stage, Timberlake can’t help but glide. Jay Z wore a backwards Brooklyn Nets hat on his head, Timberlake a fedora. And so on.

One thing they share is they’re both excellent performers. They started the show together with «Holy Grail», their collaboration from Jay Z’s new album and one of two 2013 songs on which they share co-billing. They began on opposite sides of the gargantuan stage and met in the middle, Jay Z screaming «whatupdoe!» to the Detroit crowd while images of Renaissance-era sculptures filled the video screens behind them. Timberlake was in an especially playful mood, breaking out a Michael Jackson move or two when the lyrics made reference to «Thriller». Timberlake’s highly choreographed boy band days are a thing of ancient history, but he still works the stage with the effortless smoothness of a lifelong dancer.

With Timberlake’s 17-piece band the Tennessee Kids roaring behind them, the two stars segued into a mash-up that combined Jay Z’s «I Just Wanna Love U» with Timberlake’s «Rock Your Body», an adventurous pairing that showed how far these two performers were willing to go with one another. Timberlake filled in on the Jackson 5’s «I Want You Back» while Jay led into «H.O.V.A»., and while Jay took on his hit «Excuse Me Miss», Timberlake lent a hand on keyboards.

The two then traded off hits for awhile, with Timberlake’s towering version of «My Love» standing out as a show highlight. «That was a good start!» Jay yelled at the 40-minute mark, both a brag and a challenge to keep the momentum going. He rolled into «99 Problems» while Timberlake filled in on guitar (and led into a «Walk This Way» riff during the second verse).

A mini-set of Jay Z songs was followed by a suite of Timberlake hits, including a version of «Cry Me a River» that sounded as scorned as the day it was written (and included brief snippets of Juicy J’s «Bandz a Make Her Dance» and Kanye West’s «New Slaves»). He ceded the stage to Jay Z for a short set and the two came back together for a gigantic-sounding «Empire State of Mind», with Timberlake singing Frank Sinatra’s version of «New York, New York» at the start and finish.

There was more back and forth — Timberlake doing his hit «Mirrors», Jay Z taking on «Run This Town», Timberlake bringing «SexyBack» — before the two teamed back up for a duet on «Suit and Tie», done while both were sipping champagne and toasting to one another. They closed out with «Young Forever», dedicating it to both Trayvon Martin and the city of Detroit, «a city on the rise!» as Timberlake said. They left the stage together, victorious, pulling off one of the bigger shows to hit the road all year.

Jay Z and Justin Timberlake come from different worlds and different generations — they’re separated by 11 years — but at Ford Field Tuesday they had at least one thing in common: They were united by greatness. And that was more than enough.