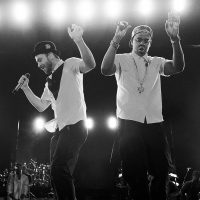 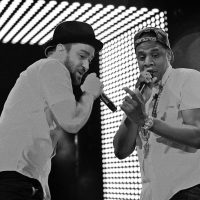 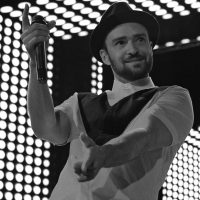 BOSTON _ Revelry triumphed over rivalry on Saturday night at Fenway Park as Justin Timberlake inspired 35,000 or so Bostonians to sing-along to Sinatra’s «New York, New York», a stunning moment perhaps pushed to apocalyptic proportions when it segued into Jay-Z’s «Empire State of Mind».

Has the world gone absolutely mad?

The Red Sox (thankfully) are on the road and once again promoters have turned the figurative «lyrical little bandbox» into a literal band box, parking a stage in centerfield and pulling in one of the summer’s hottest tours.

A concert at Fenway is still a jarring visual, almost as jarring as the «Frozen Fenway» experience that erects a hockey rink stretching across the infield during the winter. This summer stage, set up for the Jay-Z / Justin Timberlake «Legends of Summer» tour, juts out from the centerfield triangle, tucked between the Green Monster and the bleacher seats.

The collaboration of Timberlake and Jay-Z might be the biggest pairing since Michael Jackson and Paul McCartney cut «Ebony and Ivory» or when Elton John and Billy Joel toured together in dueling piano mode.

While the modern version may not be as iconic, give them time. They have the chops.
The two and half hour set featured Timberlake supporting Jay-Z’s raps and Jay-Z rapping through Timberlake songs and both taking the stage separately while fronting a colossal band (two drummers, horns, backing vocalists).

Timberlake had more stage time, but Jay-Z had the crowd. While the former had to work hard for the money, Jay-Z merely had to make his way to the spotlight to send the crowd into a frenzy.

The pair opened with «Holy Grail», Jay-Z rapping, Timberlake crooning and Timberlake stayed on the stage for «Rock Your Body». He acquiesced to the mogul who rapped through «I Just Wanna Love You (Give It To Me)» and «Izzo (H.O.V.A)».

Back and forth they went, slugging out rap, hip hop, R&B and Timberlake’s infectious take on new jack swing. They joined forces again on «99 Problems» with Timberlake voicing the character of the law while Jay-Z …hit it out of the park (ugh).

Jay-Z kept up the momentum with a brief solo turn, banging out «Public Service Announcement» and «Hard Knock Life (Ghetto Anthem)» before tearing through «Heart of the City (Ain’t No Love)» with Timberlake back in tow.

It turned into the Timberlake show from there with the multi-talented performer strutting and showboating through «Pusher Love Girl» «Summer Love», and «Love Stoned». Just when it seemed like the momentum would wane, Jay-Z returned and brought the house down with «Dirt Off Your Shoulder».

It was then that the duo desecrated the hallowed field (aided and abetted by the majority) with their New York-centric sing-along, although Timberlake tempered the blow, asking permission for a couple of New York residents to show Boston some love.

Timberlake finished up with «Sexy Back», and then joined Jay-Z in a toast as two worked through «Suit and Tie». Jay-Z called out to any and all impacted by the Marathon bombings as he and Timberlake encored with «Forever Young».

You see, these things almost never happen. Icons on the opposite poles of pop music don’t typically open stadium shows blasting bits of the best hits of the new millennium at each other in rat-a-tat-tat succession.

But Jay-Z and Justin Timberlake did. In the first half-hour alone, the pair fired off slices of «Holy Grail», «Rock Your Body», the Jackson 5’s «I Want You Back», «Izzo (H.O.V.A.)», «Senorita», «On to the Next One» and a handful more. And they’ll do it at Fenway again tonight.

When headliners share a bill — Journey and Def Leppard or Matchbox Twenty and the Goo Goo Dolls — they’re usually not looking to blend their art. They’re only after a bigger payday.

Jay-Z and JT love getting paid — and they spent money to make money with a big band (horn section, four singers, three percussionists and much more) and bigger set (twin video screens the height of the Green Monster). But their Legends of the Summer Tour has artistic ambitions too.

Both have the catalogs and charisma to shine alone — just an impish smile from Justin or a little Hova swagger produced mad hoots of joy.

And they had great solo moments: Timberlake’s top came on the Rat-Pack-with-a-Prince-twist of «Pusher Love Girl»; Jay Z towered over a packed park with «Hard Knock Life».

The pair delivered the expected tag teams («Holy Grail», «Suit & Tie») to wild cheers. But the surprises — the fun they had bumping up against each other — elevated the show to the awesome.

Grabbing a guitar with «Boston Strong» embroidered on it, Timberlake added the «Walk This Way» riff to «99 Problems». He jumped in with some Motown-style soul for Jay’s «Heart of the City». Side by side, the two closed the night leading a 30,000-strong singalong «Young Forever», which borrows Alphaville’s anthemic chorus.

For two superstars, two egos, to share a tour, a stage, a backing band is rare. Their genuine love of performing together, love of pushing each other and tossing thunder back and forth for two and a half hours — that’s explosive.

Justin Timberlake, Jay Z hit it out of the park

One sang, the other rapped, and the thud of the band kicked in and blurred the lines between their respective genres.

It was a typical enough introduction from opposite ends of the stage at Fenway Park. Less expected was just how fluid and downright infectious Timberlake and Jay Z’s show was on Saturday night. With more than 33,000 fans packing the ballpark, it was the first of two nights under the banner «Legends of the Summer Stadium Tour». (Tickets are still available for Sunday.)

They hit hard right away with a brisk, potent blast of some of their biggest hits. Timberlake reached back with «Rock Your Body», «Señorita», and «Like I Love You». And Jay was certainly no slouch himself with «Izzo (H.O.V.A.)» and «Big Pimpin'» (with someone playing that flute part live, believe it or not).

At nearly two and a half hours, it was a tightly choreographed show, but there was no shortage of spectacle or unbridled joy. At any given point, the stage looked like the set of «Soul Train». Backup singers, four of them, didn’t dance in sync but rather down and dirty. Same for the horn section; the Sox caps were a nice touch, too. (Timberlake and Jay both received Sox jerseys emblazoned with their names later in the evening.)

With just a hairpin turn in the arrangements, the band seamlessly switched from Timberlake’s catalog to Jay Z’s. It was incredible the way they navigated the set list, the way «Rock Your Body» bled right into «I Just Wanna Love U (Give It 2 Me)» as if it were meant to be.

After two handfuls of songs together, Timberlake and Jay eventually ceded the spotlight for solo sets that touched on their new albums. Timberlake savored the breezy neosoul of his «20/20 Experience», including the Prince-like seduction of «Pusher Love Girl» and «Take Back the Night». «Cry Me a River» rang out like a surround-sound singalong, much like Jay Z’s «Jigga What, Jigga Who» did earlier.

The men shared not just the stage but also the heavy lifting — Jay Z as hype man to Timberlake’s moon-walking heartthrob, with Timberlake occasionally backing him on keys, guitar, and vocals. During «99 Problems», Timberlake strapped on an electric guitar (with «617 Boston Strong» on the strap), sidled up to his tour mate, and inserted the riff from Aerosmith’s «Walk This Way».

«Can two boys who live in New York show you some love right now?» Timberlake asked before a bit of sheer comic genius. Timberlake the crooner set up Jay Z’s «Empire State of Mind» by belting «New York, New York» as a preface. And the crowd joined him.

Let’s be honest: Fenway Park isn’t the first place where New York is saluted. But that’s the power of music and of two entertainers who reach well beyond styles and into the stars.