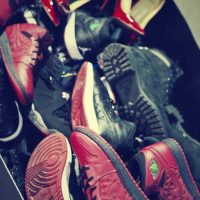 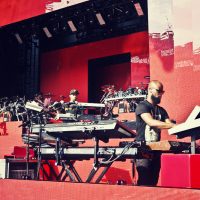 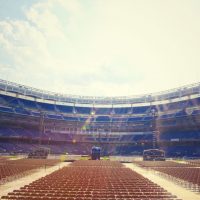 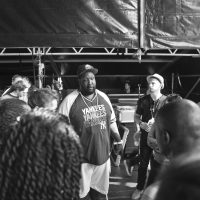 Scott Randell (@aimxhigh) — Amid the heat-wave sweeping the northeastern United States, two of music’s «legends of the summer» (and of any summer for that matter), Justin Timberlake and Jay Z, took to New York’s iconic Yankee Stadium for the second stop on their 12 city/14 show tour. And among all the goodness that can be said about the dynamic duo’s on-stage theatrics and pin-point execution, an even more important initiative took place prior to Saturday night’s show – paying «it» forward to tomorrow’s industry leaders. The «it», of course, being the access, exposure, and education to the pre-show of one of 2013’s most highly coveted tours.

10 specially selected GRAMMY U students were given the opportunity of a lifetime – to go behind the scenes on a private tour of Justin Timberlake’s (and crew… which is enormous by the way) temporary command center at the ballpark.

It was fittingly led by none other than Renee Earnest (who as many may know was a once-upon-a-time grade school teacher of JT’s back in Millington, Tennessee). She is now an integral part of his operations and management team and has been since his *NSYNC days. It’s important to point out that upon entering the premise, most (if not all) of the students were under the impression they were there for the soundcheck and soundcheck only. Instead, they were taken from department to department, speaking with a member at every stop. It was amazing to witness the willingness of each to take time to speak with the students; truly engaging themselves in the conversation, dreams, and goals of the youth. It wasn’t until Justin himself appeared, and then spoke at length with each GRAMMY U member, that the kindness and team-oriented vibe of the entire crew was no coincidence. It was the contagious result of a family. JT’s commitment extended way beyond that of nearly any performer of his stature. His «larger-than-life» presence seemed absent from the room. Jokes were made and stories were told; he offered out refreshments and made sure everybody was comfortable – like any good host would. At the tail end of the tour, he invited everybody on stage with him to take pictures and gaze out into the soon-to-be filled stadium. It was fantastic. Oh, and the students finally listened to the soundcheck…almost forgot about that. It’s experiences like these that tend to inspire far beyond the moment. And it’s people like Justin Timberlake (and Renee and Sonia Muckle, his publicist) that allow it to become what it should be – special.