Estudiantes de GRAMMY U en «Legends Of The Summer», Chicago 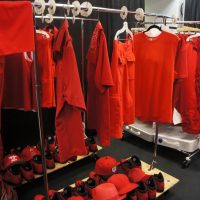 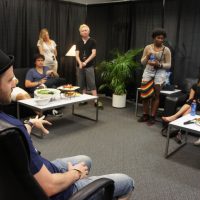 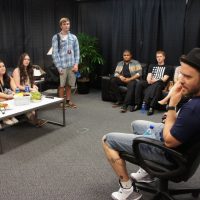 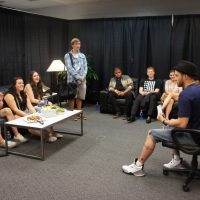 James DeLuca — What did it take for a city to forget that Monday is the start of the workweek and not the beginning of the weekend? Two of the world’s most influential musicians on a tour dubbed the «Legends of Summer» (which is arguably an understatement) seemed to do the trick. On July 22nd, Justin Timberlake and Jay Z performed inside Chicago’s Soldier Field on the shores of Lake Michigan. When all is set and done, the billboard-topping artists will have traveled to 12 cities and played 14 shows to complete their highly anticipated summer stadium tour; a massive feat considering the unprecedented amount of work that goes into each stop on their month-long journey through the U.S. and Canada.

Rather than refraining from revealing the intricacies of the tour’s mastermind, Justin Timberlake and his army of crew members were willing to share their hectic craft with 10 fortunately selected GRAMMY U students mere hours before the fantastical show was put on in front of thousands of screaming fans.

Renee Earnest, JT’s hometown grade school teacher turned operational management team leader, and Sonia Muckle, his publicist, each took turns leading the students through every facet of the show’s construction and subsequent deconstruction. From soundboards to dressing rooms, they were introduced to dozens of staff members, all of whom were willing to share their stories and provide valuable advice to anyone who wanted to learn more about the various roles that exist in the industry. It was clear that a certain sense of familial comfort existed amongst the crew, which was proven to be necessary when the vast undertaking of each show is considered. No one exemplified this sincerity as much as the master of entertainment himself, Justin Timberlake.

After patiently waiting in the doorway for his tour manager Andre Person to finish discussing the specifics of his work, Justin introduced himself to everyone before sitting down to chat with the GRAMMY U students for almost an hour. Rather than coasting through the stereotypical slow pitch Q&A formatting, JT went out of his way to learn the names, schools, majors, and most importantly, aspirations of each student. He also shared his valuable insight into the industry, along with a lengthy description of the artistic development process behind «The 20/20 Experience», and part 2 of his double album that will be released later this year. JT expressed his desire for a truer, vintage sound and look, which was actualized through the incorporation of real instruments and musicians on the album as opposed to synthesized tones and recordings.

As the discussion with Justin came to an end, he reassured everyone that he wasn’t leaving. He asked the GRAMMY U students to follow him as he led us through the maze of tunnels that made up the backstage at Soldier Field. It was only a few minutes until we found ourselves being led onto the massive red stage right behind Justin. It was a fantastic moment, as Justin told everyone to look out to see what it was like to play to at a sold out stadium. Justin continued to answer the students’ questions about any and everything. It was evident that he truly cared, and wanted to give as much insight as he could.

The «Legends of Summer» stadium tour doesn’t merely take skill to produce and perform; it takes an unprecedented amount of time, talent, and passion. Renee, Sonia, the crew, and most importantly, Justin Timberlake himself embody all of these characteristics. They set a soaring standard for the music industry while simultaneously encouraging us, the students they met with from GRAMMY U, to aim higher in the future.