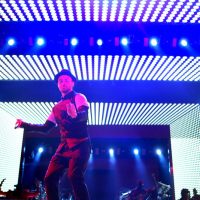 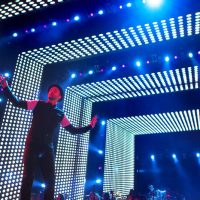 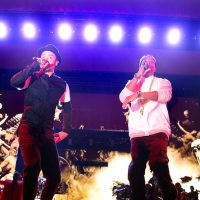 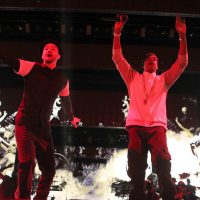 It was the stuff of Legends.

Jay Z and Justin Timberlake’s co-headlining trek dramatically lived up to its name — the Legends of the Summer Tour — on Friday night at Candlestick Park in San Francisco.

The show was even greater than the sum of its parts, soaring on the rare synergy that happens when the right two stars come together onstage. It was expertly paced and executed. The set list was superb. Both stars were in fine form.

And I left the venue feeling I’d witnessed something special — a once-in-a-lifetime event.

The concert was a monster hit with the 53,000 fans who turned out to the legendary sports venue, which is home to the San Francisco 49ers for one more season before the team moves to Santa Clara in 2014. People were absolutely ecstatic to be in the house, even though many had to deal with nightmare traffic just to get there. No one even seemed to mind that the show started more than 90 minutes late, since there was a DJ on hand to keep the party going.

And it certainly was a party.

Jay Z and Timberlake — the King of Hip-Hop and the Prince of Pop, respectively — made every moment of the approximately 100-minute show count. They delivered an absolute blueprint on how two stars can share the stage, and the spotlight, leaving no egos bruised or fans shortchanged.

Eschewing the traditional concert model of a clearly defined opening and a closing act, the vocalists wove their songbooks into one long set. They appeared together onstage — with each joining on the other’s hits — and also performed solo segments. They offered up a generous set list of more than 30 songs, yet the evening just flew by. Overall, it was a similar script to what was seen with Jay Z and Kanye West’s 2011-12 Watch the Throne tour.

The presentation looked as impressive as it sounded. The stage was a magnificent monstrosity — a giant fire-engine red box, hollow at its center, which looked like a Transformer at rest. It was a dramatic frame for the action, which happened on a four-level bandstand that housed an 18-piece backing band.

Taking the stage from opposite ends, Jay Z and Timberlake immediately kicked the show into high gear with a righteous «Holy Grail», which hails from the rapper’s latest chart-topper, «Magna Carta & Holy Grail». They built on that momentum as they continued through Justin’s «Rock Your Body» (from 2002’s «Justified») and Jay’s «On to the Next One» (from 2009’s «The Blueprint 3»).

Timberlake’s long layoff from touring to focus on his equally impressive movie career didn’t hamper his performance. If anything, he was more sensational than before, combining good-as-ever dance moves with an even greater onstage charisma, increased maturity as a vocalist and a deeper songbook (thanks to this year’s «The 20/20 Experience»).

Jay Z, for his part, is quite used to sharing the stage with other stars. Besides the Kanye trek, he did a co-headlining run with Mary J. Blige in 2007. The King of Hip-Hop is OK with playing second fiddle, if it’s in the name of winning the game — just ask his wife, Beyoncé, arguably the biggest pop star on the planet.

The show was rather light on special effects, especially for a stadium gig, but packed plenty of sonic fireworks as the two stars combined forces on several medleys. Timberlake did his best Sinatra impression on «New York, New York», which led directly into Jay Z’s own Big Apple anthem «Empire State of Mind».

The show closed with some of the best performances of the night — highlighted by a terrific bump and grind through Timberlake’s «SexyBack».

Thus brought to an end not only the show but, in all likelihood, Candlestick Park’s time as a concert venue. It’s been a historic run, punctuated by the fact that the stadium housed the Beatles’ final ticketed performance in 1966. If so, at least it went out in legendary fashion.