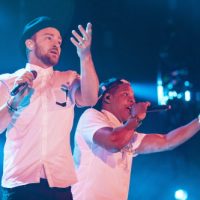 What was Justin Timberlake thinking when he sang «New York, New York» in a football stadium parked alongside Lake Michigan? Or Jay Z never taking that New York Knicks cap off his head when performing just a few miles from United Center?

The Chicago audience at Soldier Field Monday didn’t get sensitive, or at least they pretended to hold back their Gotham rivalry. That Timberlake pulled the Sinatra classic off with cheers — followed by headlining partner Jay Z’s «Empire State of Mind» — shows the dynamic duo are, indeed, capable of anything.

The «Legends of the Summer» tour pairs the two biggest names in rap and pop for a two-plus-hour mash-up that incorporated nearly 40 songs, a 13-member band, a massive lighting and video spectacle, and an arsenal of two respective hit machines. Besides matching outfits — short-sleeved white shirts, black pants — connecting both performers are two new albums to tout, plus undeniable charisma and flash.

It helped that, as a prelude, both made cameos on each other’s most recent albums. In the first third of the show, Timberlake and Jay Z (who no longer uses a hyphen — who knew?) played one of those songs — Jay Z’s «Holy Grail», which kicked off the show. They then showed how things would play out: Jay Z transformed into a hype man during Timberlake’s «Tunnel Vision» while Timberlake returned the favor, adding vocals — the Jackson 5’s «I Want You Back» to introduce «Izzo (H.O.V.A.)» — or filled in on guitar or keyboards. Ever imagine the Jay Z signature «99 Problems» with Timberlake slashing away at an electric guitar? Now was your chance for reality to hit.

The volleying moved at a swift pace, resulting in some powerhouse transitions — Timberlake’s «My Love», ending with a savage guitar solo, followed by the thudding bass of Jay-Z’s «Big Pimpin'» and Timberlake’s «Tunnel Vision» morphing into «Jigga What, Jigga Who».

The show was also sliced into solo portions, with each headliner stretching out alone before the crowd of nearly 50,000 people. Jay Z’s strongest material included songs that stretched back a decade, documenting his Brooklyn days — «Hard Knock Life (Ghetto Anthem)» benefited from a live tuba driving the beat — while «Public Service Announcement (Interlude)» detailed a spiritual awakening that helped propel his career from that point forward.

On «Heart of the City (Ain’t No Love)», sampled from the R&B classic by the late Bobby «Blue» Bland, Timberlake reappeared to sing Bland’s chorus, which Jay Z gave a nod to the producer who made it one of his best songs, hometown boy Kanye West: «It’s that Chicago song!»

Even though Jay Z took time to boast the 1 million sales of his newest album «Magna Carter … Holy Grail» (courtesy of sponsor Samsung purchasing that amount in one hit), the material from this earlier period still endured. No other rapper today is a stadium star, nor boasts the songs that can be carried forward as classics.

Timberlake’s greatest accomplishment was demonstrating that, with just three albums under his belt, he too justified stadium status. The transition from boy band idol to fully mature pop star was obvious. While he slid across the stage here and there, he kept dancing to a minimum and instead, led the big band — including four horn players, two drummers, and four backup singers — while sitting at a piano. (The tight video shots showed a rubber bracelet baring Trayvon Martin’s name.)

Unlike Jay Z, Timberlake’s newer songs had more depth. «Cry Me a River» and «Sexyback» at this point felt like early novelties while the disco-funk of «Take Back the Night» (from his forthcoming sequel to his current «20/20» album due this fall) and mega-pop «Pusher Love Girl» showed a major pop star had arrived.

Stretching to nearly midnight, the show ended about 20 minutes before each performer exited the stage. That’s because each pulled out songs — «Empire State of Mind» and «Mirrors» — that transcended them both. A digitized Alicia Keys handled the chorus of the first, and the backup singers the latter, which freed up both headliners to deliver the songs to the cheap seats high up in the back of the house. They were both rare examples in which the songs were even bigger than the stars, and in a football stadium, that’s no small accomplishment.