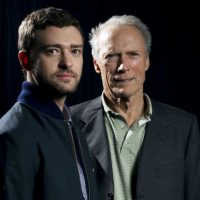 Justin Timberlake didn’t leave anything to chance when pursuing the part of Johnny «The Flame» Flanagan alongside Clint Eastwood in Trouble with the Curve.

After all, the role of the former ballplayer with radio-booth aspirations seemed tailor-made for The Social Network star’s on-screen energy. Timberlake even shot an audition tape for director and longtime Eastwood producing partner Robert Lorenz to show the acting legend.

But sitting with his co-star at Beverly Hills’ Culina restaurant, wearing a jacket over a casual golf shirt, Eastwood admits there were other factors that made him excited about bringing Timberlake onboard — the guy is one heck of a golfer.

«If (Timberlake) had been a lousy player it would have been, ‘He can’t play the role’. « Eastwood says with a smile, causing Timberlake to bust out into laughter.

«He might be great on the tape, but what’s his handicap?» Timberlake, 31, retorts.

Eastwood — cautious in the wake of his «empty chair» speech which continues to reverberate nationally as Curve opens Friday — points out that he is only joking about the mandatory golf skills. Timberlake brought his A-game acting-wise to the baseball drama about a scout, Gus Lobel (Eastwood), trying to prove his worth in the modern world while repairing the relationship with his work-obsessed daughter, Mickey (Amy Adams).

But it didn’t hurt that Timberlake (an impressive plus-5 golf handicap) was on hand for the first movie that Eastwood didn’t direct since In the Line of Fire in 1993.

This meant that Eastwood had time to sneak off during the Atlanta-based shoot.

«When you’re directing, you never get to play golf», says Eastwood. «But we managed to get a few rounds in down there».

The star even managed to get Timberlake onto the famed Augusta National Golf Course a week before the Master’s tournament for 36 holes.

«So the two of them would go off and have fun while the rest of us were working all the time», says Lorenz. «They’d come back all sunburned and tired from walking all 36 holes».

Eastwood actually remembers meeting Timberlake for the first time years ago during a charity golf tournament while the singer/actor was still with the band ‘N Sync.

«I didn’t associate him with acting», says Eastwood. «So it becomes more of a deal all of a sudden when he’s coming back as an actor».

Timberlake was immediately thrown into the line of fire when he showed up on the Curve set. His first day’s work involved a bar scene where he stops Eastwood’s Gus from pummeling a rowdy local with a broken bottle.

«He had to jump right in there», says Lorenz. «Afterwards Justin turned to me and said, ‘I cannot believe I’m pulling Clint Eastwood off another guy in a bar fight. This is so awesome!’ «

«I think I actually, legitimately, saved that other guy’s life», Timberlake jokes. «We could have had an insurance claim on our hands».

Eastwood was immediately impressed with Timberlake’s eagerness to put life into his own character, even if it meant goofily taking part in a clogging folk dance scene — part of an on-screen effort to impress Adams’ character on a date. Timberlake, who has proven he can bust a move or two, embraced that he couldn’t handle the quick clogging steps required.

«If you recall, the scene was shot from the waist up», says Timberlake, pointing out his own bad footwork.

They both agree that in the same circumstances they too would hit the clog dance floor, however ridiculous looking.

«I don’t know a lot of guys that would get up in those circumstances», says Timberlake. «But they would be silly not to get up and dance with Amy Adams. It would be ridiculous».

«If there’s a great looking gal that you are hitting on», agrees Eastwood. «If she wants to clog. well then okay, clog».

«We actually couldn’t get the clogs off him», Timberlake adds of Clint.

«And they were Amy’s, I borrowed them», Eastwood jokes right back.

Timberlake was able to show verbal dexterity with his character’s eagerness to be a baseball announcer, re-creating a famous World Series radio call during his scenes with Adams.

«When I was a kid, I used to impersonate everything actually, but specifically announcers», says Timberlake. «So it’s kind of ironic that this role came up. I was reading it thinking there is some serendipity to this».

Eastwood shows sensitivity and frailty in his Curve character. During an emotional scene at his wife’s grave, Gus’ chin quivers as he sings mournfully. In a prolonged opening sequence, Gus has trouble urinating and finally shouts at his broken-down body part, «Well, I outlived you».

«I was just making fun of that characteristic that people of a certain age have», Eastwood explains about the line, adding: «I have not had that problem. I have the opposite problem».

But Eastwood also shows the same orneriness portrayed in 2008’s Gran Torino, which is becoming his typical screen persona. «Some things are just easier for some actors to do», says Eastwood. «Everyone has their strong points. I guess scowling is one of mine».

This cantankerousness is not visible for a moment during the high-spirited, laughter-filled discussion with Timberlake, where the quips fly between the two like golf buddies.

«I don’t use the nice facilities, and I never have it on», Eastwood says with a shrug, pulling an underutilized iPhone out of his pocket. «The only time I turn it on is when I transmit a phone call. I guess it could just be a regular old flip phone».

But Eastwood draws the line when asked if he’s like his computer-allergic character, Gus.

«Are you asking if I’m as dumb as the guy in the film? Not quite», says Eastwood.

«I can attest to the ‘not quite’, « Timberlake adds.

Eastwood doesn’t bristle during talk of his RNC speech. «It was just a private life deal that came over me at the last minute», he says. «I don’t like getting up and making fun of the president of the United States. That’s not my deal. But I am concerned. And not for me».

Timberlake’s future involves preparing for the release of two more upcoming major films (the action flick Runner Runner and the Coen brothers’ Inside Llewyn Davis) Eastwood’s next project, a remake of A Star Is Born, is on hold.

Eastwood’s wife of 16 years, Dina, 47, and his daughters Francesca, 19, (with former girlfriend Frances Fisher) and Morgan, 15, star in the E! reality show Mrs. Eastwood and Company.

«I don’t have anything to do with that. I don’t like reality shows», he says. «It’s her business, I’m not going to suppress her. My libertarian values will not allow me to».

Life at this point is not about rushing to the next gig.

«I’ve been through that period in life where I just couldn’t stop», Eastwood says. «But now I just smell the roses. Otherwise, what’s the use?»

In fact, the most pressing thought in his mind suddenly becomes yet another golf game with Timberlake.

«We were just talking about that», says Timberlake, when asked about their next outing, as they both check their watches simultaneously. «When does the sun go down?»

«I don’t know». says Eastwood. «How late do you think the driving range is open?»