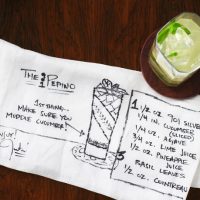 When it comes to entertaining, few do it better than Justin Timberlake–onstage or off. It’s not just the sold-out world tours and big-budget movies, like the new film Trouble with the Curve with Clint Eastwood. We’re talking about Sunday barbecues during football season that feature quality eats (organic flatbread pizzas and pretzel-bite sandwiches from Greenleaf in Beverly Hills), an exceptional playlist («I’ll go through a 25-song set of Gap Band and S.O.S. Band and Kool & the Gang, then bridge that into Radiohead and the Strokes», he explains), and maybe a late-night burger delivery from an In-N-Out truck. Entertaining is so important to the 31-year-old that he recently founded the home furnishings line HomeMint with his interior designer, Estee Stanley, so you can bring his welcoming vibe into your own living room. And when you do, we suggest the following method for keeping guests happy: «Make sure everyone has enough to eat–and booze on». As for those cocktails, one of his go-tos is a Pepino. «Every time I’ve been photographed at a Lakers game it’s with a Coors Light in my hand», he says, laughing. «But I’m a big fan of tequila». Here’s how to make one at home.

What’s the key to being a great host?
Justin Timberlake: The key to good hosting is to make sure everyone has enough to eat–and booze on. In my house, we tend to host Sunday barbecues, which is convenient in football season. Everybody can do chips and dips. But a good friend of ours, Jon Rollo–one of the founders of Greenleaf in L.A.–will send over pretzel bite sandwiches and flatbread pizzas. He’ll send over fennel salads. Don’t get me wrong: I can never turn guacamole down. But this is a healthy alternative to loading your face with cans of Rotel.

What’s your philosophy on being a good host?
JT: If you’re hosting people, you want them to feel like they’re in their own home. I don’t like things to be too formal. I’ve hosted Halloween murder mystery dinners where people had to search through the house for clues. We did one that was Prohibition era-themed. The girls showed up as flappers and the guys showed up in waistcoats and pinstripes. At some point, people will drink enough to be hungry, so you need enough food. I’ve hosted parties where I’ll  have an In-and-Out truck show up later on in the evening. You know everyone will be hungry again.

What’s your go-to drink to cool down?
JT: Every time I’ve been photographed at a Lakers Game it’s with a Coors Light in my hand. But I pick my cocktails based on the seasons. In the colder weather I tend to drink whiskey cocktails. In the warmer months, I’m a big fan of tequila, obviously. You can do a Paloma–with tequila and grapefruit juice. But my go-to is a Pepino. It’s cucumber, tequila, pineapple juice, and Grand Marnier. It’s a BBQ cocktail. I’m into beer cocktails, too. I had a beer cocktail the other day: honey wheat ale, micro-brewed with blueberries. And then they serve half a shot of Woodford Reserve with it. You get the carbonation from the beer and this smokey thing from the bourbon, offset by the blueberry, which is sweet. Perfect flavors mixed into one. I only had one cocktail, which was really smart–I wanted to be able to walk out of the restaurant.

You were born in Memphis. If you’re entertaining there, where’s the food coming from?
JT: Gus’s Fried Chicken is one of my favorites. But I’ll mention a BBQ place you’d have to search to find. It’s called The Store on the Hill, and it’s literally a convenience store on the hill. It’s family-owned, and tucked away in the country, and the owner smokes a bunch of different pork shoulders every day. You can get a tub of pulled pork and a tub of baked beans and a tub of cole slaw and take it home to entertain 20 people. It’s home-smoked BBQ. But the place itself? It looks like that scene in the movie where someone is going to be brutally harmed. Someone’s about to say, «Goodnight».

What’s the strategy for music when you’re having people over?
JT: We’re pretty chill at my house. We stay away from the EDM–electronic dance music–until the sun goes down. I try to keep the debauchery to a minimum until then. Music is the eternal mood shifter. I’ll go through a 25-song set of Gap Band and SOS Band and Kool and the Gang–a good, funk-soul set–then you can bridge that into Radiohead, The Strokes. I find that classic rock seems to work really well, although that may sound cliché. My mixes run the gamut from Radiohead to Kanye to Steve Miller Band to Dylan.BA‘s Exclusive Look at Timberlake’s HomeMint October Collection!

What is HomeMint? It’s a new online shop for furniture, kitchen and tabletop items, and other home decor goods–and it’s curated by Timberlake and his interior designer Estee Stanley. For their October collection, Timberlake and Stanley actually designed some products along with the help of New Jersey-based ceramicist Barbara Eigen–and we got an exclusive look. See the goods below, on sale at homemint.com starting October 1.

A note about how the site works: Members pay a $10 monthly fee, which becomes a credit towards anything purchased on the site. Members also get discounts on items–but you don’t have to be a member to buy the goods. So go check it out!