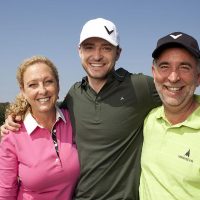 Justin Timberlake joined his first club when he was 12, embracing its prim customs and tidy dress codes. But enough about his time as a Mouseketeer.

He’s a grown man now, not a child-performer; a 30-year-old pop and movie star and avid golfer who has traded his mouse ears for a logoed cap and a collared shirt. «There aren’t many places I can go where I don’t feel like I’m being watched», Timberlake says. «But the golf course is one of them. It’s my refuge. It’s where I get a chance to be alone in the world».

His 6-handicap and celebrity status make him something of a modern-day Bing Crosby: a serious stick with mega drawing power. His name appears on a PGA Tour event (the Justin Timberlake Shriners Open) and atop private lockers (he’s a member at Liberty National in New Jersey and Lakeside Golf Club in Los Angeles). It’s even on the deed of a Memphis-area course, which he purchased, with his stepdad, in 2007.

Bankrupt when he bought it, Big Creek Golf Course came with a personal connection: It was the course on which he had learned to play. With Timberlake’s backing, it has been reborn as Mirimichi (a Native American word for «place of happy retreat»), an eco-friendly layout that has racked up honors for environmental stewardship as quickly as its owner collects Grammy Awards.

During a recent swing through his hometown, Timberlake dropped by Mirimichi for a casual round and a wide-ranging conversation about the game he loves.

«I could talk golf all day», he said.

My first advice to anyone who is thinking about buying a golf course is: Don’t do it.

But if you’re going to do it, don’t do it because you think you’re going to make money. Do it for the love. Do it because you want to give people a memorable experience. Mirimichi is close to my heart for obvious reasons. This is where I grew up playing. When it fell into financial trouble, I saw an opportunity to create something special and give back to the community at the same time. The idea of this course going under and becoming a housing development, I just couldn’t live with that.

Ever since Tiger started slumping it seems like attendance on Tour has shot down. People came out to see Tiger because they wanted to see greatness, and he delivered it reliably. It was the same effect Michael Jordan had on basketball. Guys like them don’t come along every day, but it seems like golf is waiting for that player to arrive. At the same time, with each generation, a little more rock and roll gets infused into golf, and that’s a good thing, especially when you look at guys like Rickie Fowler and Dustin Johnson, who are bringing a different vibe to the course. Golf with a bit of swagger. That’s a draw for the younger generation and a reminder that from a spectator standpoint, the more fun we can make it, the better.

My favorite post-round drink is usually a beer. And if it’s going to be a beer, it’s probably going to be a Stella. Depending on my mood, it might also be a cocktail. In that case, a gin and tonic. With a lemon, not a lime.

Golfers always think they have great ideas about course design. I know I did when we bought Mirimichi. But I had my first four or five ideas shot down right away. I wanted an island green par 3. And they were like, «Uh, sorry. You can’t. We’re in a flood zone. Do you know what it would take to get that area drained in a flood zone?» There’s so much more to it than you think. If you have a hole that doglegs left, you have to change the slope on the right side of the fairway. As an average golfer out there, you don’t think about those kinds of things.

When I started taking up golf seriously, in my early 20s, I remember being out on the course and seeing the sprinkler heads pop and I thought, «Where is that water coming from and where is it going? Is it from a natural source? Is it being reused? Is there a way to do that?» All those questions occurred to me. So when this opportunity [Mirimichi] came up, I asked, «Is there a way to make golf truly environmentally friendly?» The more we delved into it, the more it seemed like the answer was yes. It was just going to take time, commitment and a lot of help.

Butch Harmon is so popular it’s hard to get a lesson with him. But he was the guy who taught me how to hit a draw. Mostly what we focused on was keeping my hands farther away from my head and making my swing more compact. When I first saw him, he told me I was the only amateur who’d ever come to him who was as flexible as Tiger Woods or Adam Scott. It must come from being onstage. Anyway, Butch worked on toning that down: teaching me the art of the shorter swing.

Here’s how to behave in a pro-am: Relax. Lighten up. Have fun. And don’t take yourself too seriously. Joking around is always a good way to go, especially if you’re in my group.

I listen to all kinds of music, but almost never on the course. I played one time with an iPod and earphones with a cord running down my back. I was playing everything, old and new. The Beatles. Kings of Leon. You name it. But I find I can’t play well with buds in my ears. I start swinging to the beat and not my natural rhythm and then suddenly I’m all over the place.

I think the reason people came down so hard on Tiger is that the image of him that emerged was the opposite of what had been portrayed. There was a disconnect. If I had any advice for him, it would boil down to acceptance. Accept the fact that you are now the underdog, and embrace that role. Getting into that mindset might remind of him of his early years, when he was in fact the underdog, when he was fighting for a place at the top of the heap. The other kind of struggle—the fight to protect your image or your privacy, that’s not a fight you can win. I know. It’s a battle I used to fight myself. Until you get to a level of acceptance with the press and your public image, you’re always going to be fighting, and that’s exhausting.

Definitely the two coolest guys I’ve played with were Fred Couples and Arnold Palmer, so they’d be in my dream foursome. And I’d have to have my step-dad [Paul Harless] in there to round it out.

When people go to an event, there are so many orders they are supposed to follow. It’s shhh! Don’t walk there! Be quiet! I understand that there are rules and traditions and that they need to be respected. But I also wish that there were more ways to make events entertaining, especially during the pro-ams. I’ve even considered approaching the PGA Tour about adding music to the pro-am at my event so it’s even more loose. That’s something they’re doing well in Arizona [at the Waste Management Open] with that 16th hole where all the fans are going crazy. That kind of thing is great for the game.

A round at Augusta National is about the entire experience, so you want to make sure you take it all in. Show up early. Eat the breakfast, go hit some balls on the range, and have fun with whatever member takes you. Oh, and soft hands around the greens. They are absolutely lightning.

Michael Jordan was always my idol, so playing Bethpage with him before the [2009] U.S. Open was really cool. It wasn’t competitive between us. We were rooting each other on. Michael and I both really wanted to break 90. I know Michael had a bet with Tiger on that. Tiger said he couldn’t do it. I was happy for Michael when he won that bet.

Not to say anything bad about Muirfield [in Scotland], but when I went out there, I thought I’d stepped back into the 1800s. It’s not that there weren’t a lot of Justin Timberlake fans out there. There weren’t a lot of fans of anything out there. It just seemed like a lot of ornery old men. Everyone looked like Hobson from the original Arthur movie. I like to dress nicely, but that sort of look isn’t exactly my style. At Mirimichi, we have a very loose dress code. I’ve played in a collarless shirt. You can wear shorts of any type. I don’t even think we have a rule against denim. We don’t want to discourage people from coming out to the golf course because they feel like they’re going to have to wear perfectly pressed slacks.

When I think of golf, my first thoughts always go back to my stepdad. He was the one who introduced me to the game. We still play together a lot today, and we usually end up riding in the same cart and challenging the other cart to a match. But if I’m playing against him, it’s no holds barred. There’s no let up. We’re both grown men. I can accept losing and I know that he can take an ass-whupping. He takes enough of them from my mother at home.