W Magazine: «Yes they can!» 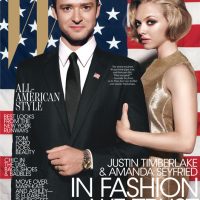 Lynn Hirschberg: Justin, it’s nearly impossible to transition from megafamous pop star to actor, but in the past year—from The Social Network to Friends With Benefits to In Time, a futuristic thriller that opens October 28—you’ve made it look easy. The first time I was conscious of you being in a film was when I saw Southland Tales at the Cannes film festival in 2006. You were practically the only part of the movie the audience didn’t boo.
Justin Timberlake: It wouldn’t be the first time I got booed. In my younger days, I got booed a lot. I had bottles thrown at me by an AC/DC fan when I played a benefit in Toronto for SARS [severe acute respiratory syndrome]. I got to the show and the bill said the Rolling Stones, AC/DC, the Guess Who, Rush, and Justin Timberlake, and I remember thinking, One of these things is not like the others. And, boy, did I find out quickly. I started singing and there was an assault of beer cans and bottles. I developed catlike reflexes from that experience.

Were you in Cannes when they screened Southland Tales?
No, I wasn’t there. To me, Southland Tales is performance art. I still don’t know what that movie is about [Laughs].

I seem to recall that your character was covered in blood. Why were you attracted to such a dark role? In all your early films, you played characters who were the polar opposites of your light, mainstream, teen-idol persona. Was that intentional?
In films, I didn’t crave the type of attention I had sort of stumbled into in my music career. And I do not audition well. I’m really not good at it. Early on, I did movies like Alpha Dog and Black Snake Moan because the directors didn’t ask me to audition.

My sense is that your film career changed when you started hosting Saturday Night Live in 2003.
Yeah, I would say that. Hosting SNL was something I’d always wanted to do. The show allowed me to play to my strengths—mixing music with comedy seemed like a way into that world. And then, the second time I hosted, I did the digital short.

«Dick in a Box»?
Yes. Thus started my love affair with Andy Samberg. We have two kids now—two boys. One of them is named Samberg and the other is named Timberlake. So they’re Timberlake Samberg and Samberg Timberlake. I think it’s supercreative and egoless to name your kids after yourself [Laughs].

Samberg says he was nervous when he pitched you «Dick in a Box».
Really? I remember telling Andy that it was important to me to make the song really singable. Melodically speaking, the songs that came out of the Nineties boy-group era we were channeling were really good songs. And a lack of self-­awareness is a very important detail in that short. We had an elaborate backstory, too: For instance, our group’s name is 2:30 a.m.

Is that the time you recorded the song?
No. Between 2:30 a.m. and 5 a.m. is when really strong lovemaking happens. Everybody knows that. [Pause.] I think if you do SNL correctly, it gives you a chance to make fun of yourself.

I know David Fincher admired your performance on SNL, and it was one of the reasons he thought of casting you as Sean Parker in The Social Network. You play the devil in that film. Did you like being the agent of evil?
I can completely justify that my character is not the devil, but yeah, I was the temptress. And that was fun. Sean Parker was the smartest guy in the room because he could spot the smartest guy in the room.

You also have some of that analytical ability—you seem like a person who surveys the landscape and does not do anything by accident.
It’s different now, but in the past I’ve had some accidents, for sure. I think I have to laugh about the fact that I grew up in public. All these weird stages in my teenage years are documented. Why did no one tell me how terrible some of those outfits were?

Is that why you’re trying to be extra careful now not to be typecast, to be a different character in every film—from Sean Parker to the romantic guy in Friends With Benefits to In Time‘s hero, who is falsely accused of murder?
Maybe. After The Social Network, I got two or three sociopaths pitched to me. I didn’t want to play that again. It’s the same for musicians—once you do a song that’s a big deal, you get pitched a similar song. But just like I didn’t want my second album to sound like my first album, I want all the characters I play to be distinct and different.

So, what’s next—country and western?
Who knows? Ray Charles did country music, and he made it his own.

Going country would not be as audacious a statement as saying that you were «bringing sexy back». That took courage. Did anyone try to talk you out of that lyric?
It does seem brash. But truthfully, I didn’t see myself in that song. I wanted people to feel as if they were saying the lyrics themselves. I imagined guys and girls, and guys and guys, and girls and girls singing it to each other in Ibiza or in a club in Manhattan or at a huge open-air festival. At the end of the day, I hope it was a song that people used. Because that was always my experience with music—I put myself in the mind and movement of the artist. I don’t think Michael Jackson really thought he was «bad», but you felt like you were bad when you sang that song.

That kind of identification is so romantic. What movies do you think are romantic?
To me, romance is not just about love. I recently saw Lust, Caution, and it’s tragic and romantic. I don’t know how they shot those [sex] scenes. Those scenes looked crazy.

Very acrobatic. They put out warnings in Asia with that movie: «You might injure yourself if you try this at home». Apparently, not everyone is that limber.
How true. In general, movies as a form are romantic to me. One of my favorite performances is Donald O’Connor doing «Make ‘Em Laugh» in Singin’ in the Rain. To me, the performance of song and dance with humor and props is a lost art. His performance is masterful and subtle—romantic in a different way.

I think that kind of performing takes both talent and courage. It’s hard to pull off bravado showmanship.
Well, I don’t think you make your point by sitting in the corner. So, yeah, be bold. And whatever happens, happens.

Amanda, in In Time, your character, a rich girl, is kidnapped by Justin Timberlake’s character.
Amanda Seyfried: It’s set in the future, where money buys you time. My character falls in love with Justin’s character—she wants to give him all the time he needs so he can save the world. It’s very romantic. No matter what’s happening in my life, I can always get lost in the romances of my characters.

And what about sex scenes?
Sex scenes are great. A lot of my costars have been sexy guys my age, and so, why not? I’m not going to pretend it’s not fun. Justin was great—he had come from doing Friends With Benefits, where he basically had sex every day at work—and so it was easy for both of us. We just kind of got it on, and then were like, «That was good!»

You’re 25. Did you dance to any songs by ‘N Sync at your prom?
I went to four different proms in high school. I was addicted to the whole ballroom thing. But it was embarrassing to be an ‘N Sync fan in high school. I was into them in middle school. I definitely danced in my friend’s basement for hours and hours to ‘N Sync’s first album.

Did you start your acting career in high school plays?
No, but when I was in high school, I did two soap operas—one when I was 15, and again when I was 17, I was on All My Children. I hopped between the soap in New York and classes in Allentown, Pennsylvania. I compartmentalized the whole thing and nobody in high school really cared that I was on TV. Everybody was more worried about sex—having it or not having it—and drinking and boys. I met my first boyfriend on All My Children—it was like a fairy tale. He was my boyfriend on the show and in real life. We kissed for the first time on the soap opera.

Wow. You can always see your first kiss!
I know. My mom used to tape all the episodes, and my parents and I would watch them over and over again. When we kissed, it was so momentous.

You had an even more famous kiss with Megan Fox in Jennifer’s Body.
Jennifer’s Body is my favorite movie that I’ve done. It was overlooked in theaters, but it does have a DVD following. I can’t believe nobody wanted to see Megan Fox and me hitting it. They had an extreme close-up of our tongues, and I’m telling you, the thing about the scene is that it’s actually really sexy. For a young girl to say that about her own sex scene—it must be because it’s special. I think Megan and I kissed really well together. We have similar kissing styles and it worked. We got it done for the masses, and the masses still didn’t show up.

You switched gears and were the perfect good girl/golden girl in Mamma Mia!
It’s true—and that was a huge responsibility. Thanks to Mamma Mia!, there are now girls who want to be me. I had to jump through hoops to get Mamma Mia!—it was not easy. I had to audition twice, and I went to see the musical in Vegas. I thought the show was magical—I was almost tearing up. And my boyfriend at the time said, «This stuff sucks, man». He wasn’t into it, but he’s like, «This is perfect for you». And I said, «It really is». Mamma Mia! changed my life.

You are clearly attracted to girly movies.
I love acting like I’m in love. It’s a very positive thing. Making a movie is, in general, romantic. It’s very special, very intimate. So you can see why a lot of actors get together. When you’re young, it’s hard not to get together with your costar. But I’ve been doing this long enough to know that it’s usually not the greatest idea.

Are you familiar with the artist Margaret Keane? She painted little kids with huge, round eyes. You look like a Keane girl.
I don’t really know her, but I’m a big fan of the artist Mark Ryden. He also paints girls with big eyes. I’d like to do a project where I’m his muse in some way. I would love for him to paint a caricature of me, with blood trickling down my throat and me holding a dead cat. It’s morbid and fun and dark, obviously, but I love that.

Ryden often paints dancers. You seem like a ballet girl.
Really?! I just started taking ballet again. I’m building a ballet studio in my garage. I’m going to take classes privately, because it’s embarrassing to take a class with others. I showed up to a ballet class in Portland, Oregon, when I was shooting a movie there, and the little girls were watching me the whole time. I didn’t want to fall on my ass in front of them. I want to be a hero to 10 year olds.