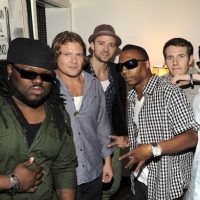 The Source Magazine had the opportunity to sit down with Justin Timberlake and Tennman/Interscope recording artist FreeSol at their intimate album release party at NYC’s Jungle Studios. Timberlake, who is the Chairman and founder of Tennman Records, executive produced FreeSol’s debut album, «No Rules», which will be out in October. One of the album’s producers Dave Tozer and songwriter Angela Hunte were also in attendance. Dave produced «Panic Attack», «The Coolest», and «Restraining Order».

«I’ve had a great time working with and becoming friends with FreeSol. They are a really great band with a lot of energy and very good songs. I can’t wait for everyone to hear these songs!» Dave Tozer told The Source Magazine.

FreeSol’s first single, «Don’t Give It Away», was heard over the closing credits of an episode of HBO’s Entourage and is currently available for purchase on iTunes. FreeSol, which is Free (vocals/lyrics), Kickman Teddy (drums), Elliott Ives (guitar/vocals), Premo D’Anger (keyboards), and Charlie White (DJ), formed in 2003 when rapper Free decided to move beyond the basic «two turntables and a microphone» hip-hop formula, the band had already developed a massive regional buzz in the South before being discovered by Memphis native Justin Timberlake, who saw them perform, signed them to his label Tennman Records, and is among the producers (along with Jim Jonsin, Timbaland, Mike Elizondo and Cool & Dre) of their debut album.

Q: Tell us about the album.

Free: The album’s called ‘No Rules’. It’s produced by Justin Timberlake, Jim Jonsin, Timbaland, Dave Tozer, Premo D’Anger. Even FreeSol has a production on there. Mike Elizando. It’s a fusion of hip-hop, rock, pop, everything we grew up with.

Justin Timberlake: The album ‘No Rules’ and FreeSol they’re kind of one way of saying ‘the other’. And that’s really what my job as sort of executive producing the album was to put them with producers like Jim Jonsin who are multi-facetted. You know, Jim is like such an amazing, multi-facetted producer, who can do hip-hop, but can also do rock, but can also do pop. Timbaland, obviously, you know people like Mike Elizando, people like Dave Tozer, people who just understand that they have more than just one sound, and I could sit back and really kind of pick the best songs out of what they had and say, while being conscious of–because this is their first album and I’ve done it a couple of times–You want to be conscious of a brand, because they have their own brand now. And that’s because we set together for so long I said no this song sounds close enough to this song, but there’s all these different rhythms. And I think that’s important. I think that’s really important, especially for a debut album and so the process was long, but I think it was really worth it to try to find stuff that was different enough, but alike to what their sound was. Which is hip-hop, rock, soul and it’s so many different sonics bottled into one.

Q: And how does Memphis influence you?

Free: Completely influences the hell out of us. I mean, Memphis is how we met. We met in Memphis. I think that most of our influences were out of Memphis. We met Justin [Timberlake] in Memphis.

Justin Timberlake: Memphis is a very misunderstood place. It is an amazing place when it comes to culture talent and art. I mean, all the people who are in the [Hoodies On, Hats Low] video are from Memphis. These are kids that if I hired them in L.A. to be in the video, the video would have cost twice as much. But they’re just like stoked to be a part of supporting Memphis. All the dancers that were in the video, the actors that were kind of my token hero kids, my bootleggers, that’s what I was calling them. But Memphis is an amazing town, because there are so many different styles of music that come through there.

Free: And you and I were talking one time. Memphis is one of the only places in the world.–I haven’t been around the world, but the only place I’ve ever known that everyone I’ve known that’s from that area are somewhat musically inclined.

Justin Timberlake: Whether it’s through Church. Or through you know–

Free: Dance or just heavy critics. Just passionate about who they like.

Justin Timberlake: It’s a music town for sure.

Q: And what’s the creative process like for you guys? All of you play instruments. All of you can write. What’s that like when you get into the studio?

Justin Timberlake: No idea goes unnoticed. Everybody pitches stuff. We just all sit around and start messing around with melodies and grooves and see what hits us. It’s a blessing for me to work with them because usually I’m sitting alone coming up with every melody and every lyric. So to have all of their minds, you know, shooting every which direction, and they all have different ideas. All I have to do is just be a coach. That’s all I have to do. I feel like Mike Krzyzewski coaching like Duke players. You know what I mean. Coaching the best in the nation. They’re all so individually gifted at what they do. Teddy’s an amazing drummer. Premo’s an amazing bass player, keyboard player. They’re all trained. They’re all in a way classically trained and Free’s an amazing lyricist.

Free: I was classically trained, too.

Justin Timberlake: Classically trained in hip-hop, yeah. For me to produce them, all I do is sit back and try to get the best out of everybody. That’s all.

Q: How did you come to form FreeSol?

Free: I was selling CDs on the street. It was a Monday afternoon, like 12 o’clock. I sold like 10 CDs at a barbershop. I was feeling myself. I decided I was going to have a little lunch. I walked into this restaurant. Teddy was sitting at the bar, Monday at 12 o’clock drinking this big a** beer. I was like I will definitely sell him a CD.

Justin Timberlake: If he’s sitting at a bar on Monday he’s got money to buy CD.

Free: And he bought a CD and we started talking. And he told me he was a drummer and that he and Premo had just a conversation the night before about how they wish they had a lead rapper, because they wanted to start a band. Called Premo up. 15 minutes later Mo’s at the restaurant. You couldn’t get Mo to be anywhere in 15 minutes to this day. So that was cool that he was there. Had no idea that he was that way.

Justin Timberlake: You didn’t know that at the time. Our whole scheduling works around Premo. Slomo.

Free: So yeah, then we met Elliot a couple weeks later and then we had our first show after like two weeks of you being…a week wasn’t it? He had a week of learning everything. Then we ended up winning our first showcase out of like a couple thousand bands.

When we asked the group what their favorite song was from their new album and why, they told us that it changes and it is hard to choose, but gave us their favorite on that evening:

E. Ives: We just heard it for the first time since it’s been mixed. And we just finished the song with Timbaland in Virginia Beach like a couple weeks ago.

Justin Timberlake: «Restraining Order» is a cool track because there’s theatrics to it just the idea of the song reminded me of the «Slim Shady» LP. Like Em’s first album. In no way shape or form, is it anything like it, but just the idea of it and the theatrics of it.

Free: So this morning my favorite song was «Audition». Then the Timbaland songs came in and then «Intoxicated» has become my number one. Love it.

Justin Timberlake: I still love «Audition» and I love «Role Model» as well.

Free: Well ‘Hoodies on Hats Low’ is crazy, too!

Mo Danger: My favorite is «American Idol» today at this moment.

Kickman: All of them for me. I mean for real cause each of them takes you on a different ride, and gives you different meanings but brings you back around to the sound.