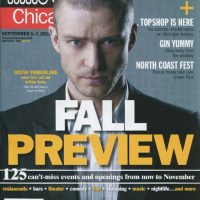 It’s hard to imagine the man who once sang about gift-wrapping his dick being bashful about anything. But Justin Timberlake—pop star turned thespian turned, soon, action hero—is visibly on edge right now. It’s about that action hero part, a description writer-director Andrew Niccol used for Timberlake in a recent Entertainment Weekly story about fall thriller In Time, which stars JT as a man on the lam. «I wish he wouldn’t have done that», is all Timberlake will say.

We’re sitting at San Diego’s Omni hotel on a July weekend, the bustle of the Comic-Con crowd audible from outside the windows. With us is In Time costar Amanda Seyfried. The pair sit next to each other on a couch, Timberlake wearing a snug driving cap and vest, Seyfried in a bright green dress. They’re both excited about the film. An adrenaline-infused cousin to Niccol’s 1997 movie Gattaca, In Time takes place in a world where, through genetic engineering, the aging gene is switched off when a person reaches 25. After that, the remainder of life is earned and spent as if it were dollars, as time has become the popular currency. Economic inequality is laid bare as the poor die young and the rich live forever.

Timberlake’s character, Will Salas, is a cash-strapped guy who wakes one morning to find more than a century has been added to his body clock. The authorities assume he stole the time and, to avoid being captured, Will takes a lovely hostage (Seyfried) and the two go on the run together.

«This film was, physically, the toughest I’ve ever done», Timberlake says. «We were doing stunts in cars, being spun around, and we’re running constantly». He says his experience as a dancer aided him in the demands of the part: «In the same way that you can make your body flow with the art of dancing, you have to adjust position with action, to be able to stiffen your body up».

«[Justin’s] a great performer and there’s a physicality to him that was perfect for this action role», Niccol says when I meet with him later that afternoon.

There’s that word again. The soft-spoken Timberlake is quick to define the film by its other elements. «There is a lot of action in the movie, but I don’t necessarily think of it that way. This was a thriller to me». Seyfried, somewhat shyly, also points out that In Time is not a typical action blockbuster. «It has something to say. It’s not all fun and games and action and cars and guns. There’s a purpose for all of it». («Though, those are pretty cool», Timberlake jokingly interjects.) Even Niccol is careful to manage the genre expectations. «It’s more about the ideas than the hardware. I think it’s social science-fiction», he says.

Still: «I always think of [Justin] as a modern hero», Niccol adds. «He’s everyman. I actually think that, by taking him into a future time, the [celebrity] baggage got left behind, and I think people will give him permission, more so even than in a contemporary film, to go along with the character».