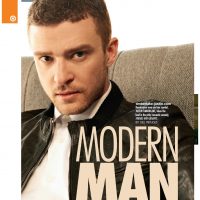 One of the busiest bachelors in Hollywood, Justin Timberlake seems like a perfect choice to play a commitment-phobic man in the relationship comedy, Friends With Benefits.

In the months following the end of his four-year relationship with actress Jessica Biel, Timberlake has enjoyed the company of several female «friends», including Daily Show correspondent Olivia Munn, and his Friends With Benefits co-star Mila Kunis. He was a fresh-faced teenager when he first began dating his Mickey Mouse Club co-star Britney Spears, and then went on to date actresses Jenna Dewan, Alyssa Milano and Cameron Diaz. Naturally, one might assume him to be a hearty advocate of the no-strings-attached hook-up phenomenon known as «friends with benefits».

When the question is put to him, however, Timberlake somewhat surprisingly replies in the negative. «It’s not worth losing a good friend over sex», says the singer-actor, whose character in Friends With Benefits discovers a similar truth with co-star Mila Kunis. «Friendship is very hard to come by, and it would be a shame to lose that over frivolity», he says when we meet up to discuss the etiquette of modern sexual relationships at a Beverly Hills hotel room. «What we’re trying to say, in a roundabout way, is that it’s okay to fall in love with your friend, more than, ‘It’s okay to have sex with your friend’. If you’re comfortable enough to get intimate with someone, that means that you’re showing a little piece of yourself that you wouldn’t show many other people and, at some point, that’s going to feel comfortable enough to have feelings beyond that, beyond what’s physical. We’re saying that it’s okay to fall in love with your best friend because they’re going to have to be your best friend to be with you for that long, and by ‘that long’, I mean forever!»

Of course, female viewers will be appreciative of the copious amounts of Timberlake’s bare flesh seen on screen in the film. When FILMINK asks Timberlake why he chose to go naked in front of millions of movie-goers, the usually loquacious actor is lost for words. «Umm, because it’s more real. It makes the situation more real. Actually, I am nude in the movie», he grins as if the thought had only just occurred to him. «But it was tastefully done, and we’re always covered up. I’m probably not going to be as game to show my ass when I’m forty, so I’ll probably do it now, while I have less time to think about it».

Despite the fact that he’s in peak physical condition, Timberlake admits to a certain amount of body anxiety. «Everybody is self-conscious», he says. «Absolutely! But I train year-round. I like to play basketball and golf and snowboard. I didn’t train a lot differently for this movie; I just stopped eating a bunch of crap because I knew that I was going to be naked. I’ll admit to that».

If most men would view getting naked with Mila Kunis as one of the perks of the job, Timberlake isn’t quite so effusive. «It’s part of your job, and we’re both pros», the actor says. «We just shot all the scenes in bulk. There was nothing really sexy about it. We were in this bed going, ‘Man, I hope people think that this is funny’. For me personally, watching sex scenes is awkward, so we thought that it was a good opportunity to find a lot of comedy, and make what was awkward into something funny.»..